MURMANSK – Norway has given the cold shoulder to plans to buy energy from the Murmansk region to power gas recovery operations at the northerly Melkøya field until the two oldest reactors at the Kola Nuclear Power Plant (NPP) are taken out of service in 2018 or 2019. 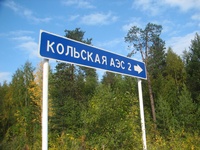 Norway’s Ministry of Petroleum and Energy sent an official letter to Norwegian grid operator Statnett in which it said that planned imports of electricity via links between Norwegian and Russian energy networks were not to proceed until Kola NPPs reactor Nos 1 and 2 are taken offline.

The letter is a matter of public record, Statnett spokesman Kristian Pladsen told Bellona over the phone. It was first published in this week edition of Norway’s Teknisk Ukeblad.

“The Department assumes that the two oldest reactors on the Kola Peninsula will be closed as planned before a possible connection to the Russian power system can occur,” the Ministry of Petroleum and Energy wrote

As such, Stanett will have to change its plans for supplying extra power to the Melkøya field. According to Audun Hustoft, a director at Statnett’s, there is no sense in building an extra interface to the Russian power grid until 2018 or 2019 when the reactors are switched off, the paper reported.

“It is a good thing that the Norwegian government has banned imports of electricity from the oldest reactors, which are inherently more dangerous and problematic,” said Nils Bøhmer, Bellona’s general director and nuclear physicist. “But the biggest problem that Russia has is a lack of an independent oversight body for nuclear power, which is as big a problem as the condition of the old reactors.”

Bøhmer added that, “Until Russia has upgraded to modern safety designs and developed a system within which nuclear regulation has integrity, Norway should abstain from importing electricity from Russia.”

The Norwegian side had use the extra power from Russia to feed the energy-starved Melkøya gas field on Melkøya Island, as well as guarantee that other energy needs in northern Norway were met.

According to Teknisk Ukeblad, Statnett is currently trying to arrange talks with Inter RAO to establish whether the Russian company would still be interested in pursuing the project in six years.

“The Russians were interested in establishing stage one relatively quickly, in 2014-2015. If this fails, the Russians might not be so interested anymore. We are waiting for feedback from them now,” Hustoft told the paper.

The Murmansk Region has long imported energy to Norway and Finland – but not energy derived from nuclear power plants.

According to the official “Schematics and Programs of Development of Electrical Energy of the Murmansk Region for the 2012-2016 period” prepared by the Murmansk regional administration and its housing and public utilities department in 2011, the energy exports are isolated to power produced by the the area’s hydroelectric plants – and this is the power that Norway receives.

Statnett spokeswoman Irene Meldal confirmed that in an email to Bellona.

“[…] We today only import hydro power from Russia, via the Boris Gleb [hydroelectric[ power plant. There will be no further connections to the Russian power system until the two old reactors are shut down,” she wrote. “New interconnectors improve the security of supply in Finnmark, as any new connection will imply an additional source of power.”

In 2010, power exports to Norway totaled 27 megawatts. Currently, the Murmansk Region may be exporting as much as 56 megawatts to its northern neighbor.

Will the Kola reactors actually be shut down?

Energy exports via a power transmission line between the Russian and Norwegian grids cannot begin until 2018 or 2019, the years officially announced by Russian state nuclear corporation as the possible end for Kola NPPs reactor Nos 1 and 2. However the process of taking the two reactors offline remains a question mark.

“The license for the first reactor was extended to 2018. We are working through a program of further extending the use of the No 1 and 2 reactors that will be safe,” Vasily Omelchuk, director of Kola NPP told the Murmansk Gorodskoe Vremya newspaper.

And Rosatom is considering building the so-called Kola NPP-2 – however there is currently scarce information about the project or what kinds of reactors the new plant would employ. According to Omelchuk, the current Kola NPP could not sustain a load of 1000-1200 megawatts as its maximum output in 800 megawatts. But there are at present no projects afoot to sustain that kind of power.

“If we are successful in realizing the ‘energy bridge’ to Finland and Norway, then our energy system could sustain loads of 1200 megawatts.

According to Vladimir Volskiy, deputy engineer at Kola NPP for engineering support and modernization, Kola NPP-2 would not be completed before 2022 to 2023 – five years later than the first two reactors at Kola NPP are to be taken offline. It is therefore likely, he told Bellona, that those two reactors would receive yet further engineered lifespan extensions until they could be substituted by power production from Kola NPP-2

“The technical possibilities to extend their operational deadlines is there – we need only the political will,” said Volskiy in February during a seminar of environmental organizations discussing issues surrounding shutting Kola NPP down.