MOSCOW – Last year, ENEL, one of Europe’s largest energy companies, signed a memorandum promising to “research the possibility” of investing into the Russian nuclear corporation Rosatom’s project of building a new nuclear power plant in the Russian westernmost enclave of Kaliningrad. Late last April, the issue came up again during ENEL’s annual shareholders’ meeting in Rome. So, is the new plant set for a radiant future?

Published on May 19, 2011 by Vladimir Slivyak, translated by Maria Kaminskaya 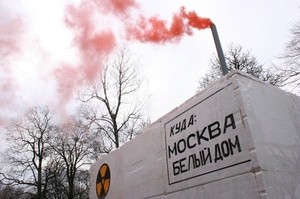 Shareholders’ meetings in Italy are quite a different affair than, say, in Germany, where several thousand people get together for an entire day to discuss the future of the organisation they have invested in. In Italy, these are much more buttoned-up events, with around a hundred representatives of large groups of stockholders – rather than ordinary shareowners – gathering for a short run-through of issues. As a result, the speeches are few, brief, and to the point; no outside agenda is allowed.

For this recent shareholders’ meeting in Rome, at the end of April, I was invited to speak in front of the board of directors as a representative of a group of shareholders concerned about the unethical investment policy undertaken by the company.

Beginning in 2008, when announcements about the new nuclear power plant (NPP) project in Kaliningrad – dubbed Baltic NPP – were first made, dozens of official statements flooded the media indicating that a search for a foreign investor was under way for the project. Notably, this site was only made part of the government’s new nuclear construction programme in the autumn of 2009 – that is, much later than all other projects – and under special terms, at that. Namely, the state corporation Rosatom declared it would not require money from the state budget for the Baltic NPP, but would rather build it with its own funds (51 percent) and those provided by foreign investors (49 percent) – a first in domestic nuclear construction. In 2010, ENEL agreed to look into the possibility of taking part in the project.

The Baltic NPP is a two-unit site with reactors of the type VVER-1200 – a new design developed in Russia which has not yet been tested anywhere in practical operation. It is being built in close proximity to the Lithuanian border – in fact, right in the backyard of the European Union.

When asked about their attitude toward the construction of a new NPP in their region, 67 percent of the Kaliningrad population said in a poll they had an unfavourable view of the project. This is little surprise if one takes into account that the idea behind the Baltic NPP is to export all of its energy abroad, while all of the risks will have to be borne by the locals. Radioactive discharges, accidents, nuclear and radioactive waste – all of those “boons” may yet be in the Kaliningrad residents’ future. Cheap electricity? Probably not so much.

The search for investor has been on in Europe for some three years now: The goal is not just to build the power plant, but also to secure consumer markets in the European Union. According to Inter RAO, an electric power trader on both the domestic and foreign markets – which is majority-owned by Rosatom and is responsible for finding the Baltic NPP its investor – Kaliningrad Region has plenty energy potential to meet its own energy needs without the new station. Also according to Inter RAO’s information, the project’s total cost may well exceed $13 billion, of which almost a third is to be spent on building new infrastructure and transmission lines to export the electricity to European consumers. The output from this site is therefore not meant to cover the local demand at all, but to be sold on the European market.

Indeed, isn’t there more money in selling energy in Europe than there is in Russia?

The three years of search, as far as I know, has only produced one candidate – the Italian giant ENEL – and it, too, has yet to make a decision, only having indicated a willingness to “research” the issue. Other companies that Rosatom has been in talks with did not even express an interest even in this, most non-committal way. Nuclear energy enjoys a rather dubious reputation in Europe, so it is understandable that companies aren’t queuing up readily for a piece of the Baltic nuclear pie, eager for a generous salvo of harsh criticism from the public.

The way I see it, the prospects of ENEL participating in the Baltic NPP project are in fact quite dim.

This is not an opinion fuelled by emotions from appreciating all the dangers of nuclear energy – but rather one based on information about the state of the company as it is made available to company shareholders.

For one thing, ENEL is steeped in debt: EUR 44.9 billion. A staggering amount, isn’t it.

This would mean that ENEL would hardly have money lying around for any new projects right now. In the past two years, the company has pledged the least to new investments compared to all other large energy providers in Europe. This does not mean that ENEL will automatically reject all new proposals that come its way – but finding money for them will necessitate seeking loans from private banks, and those are not known for being sympathetic to the nuclear energy industry.

It’s not even the ongoing Japanese nuclear crisis that is turning credit organisations off to nuclear power – it is that nuclear power plants do not make the best investment projects in terms of economic performance.

Specifically, new nuclear projects spell enormous capital costs, extremely long waiting periods before seeing any return on investment, risks of delays that cause losses to the investors, and so on. From 2008 to 2010, for instance, Rosatom, working in partnership with Bulgaria, France, and Germany, was looking actively for loan funds to attract to its old, ever-floundering project in Bulgaria’s Belene. All thirteen largest European banks that a credit line was sought from for Belene refused to provide one. None of them knew at the time that a nuclear catastrophe commensurate with the Chernobyl tragedy would erupt in Japan in March 2011.

Secondly, ENEL already has a number of large projects on its plate whose financial fate, what with the current debt burden, is now hanging in the balance.

If the company is going to cast its net across the European banking sector for any loans at all, it is likely to do so focusing on the projects already approved.

One example is ENEL’s major hydroenergy project in the Chilean Patagonia – an endeavour that has met vigorous protests from the local population and which needs around $7 billion in investments. For now, the expensive project remains without any financial backing and ENEL will unlikely pull it off with money out its own limited budget.

As it is, ENEL is already spending its own funds to complete a new unit at Mochovce Nuclear Power Plant in Slovakia, a project started a few years ago.

Another nuclear construction line that ENEL started before the Fukushima disaster is Cernavoda in Romania. The Italian company only holds a 9 percent share in the consortium developing this site, but all other European companies that were participating in this project begged off last year, citing various reasons. It remains to be seen whether ENEL decides to stay on, but in any case, it has no money at this time to commit to the Romanian site.

During the meeting in Rome, the board told ENEL shareholders that no decision had been made regarding the issue of participation in the Baltic NPP project.

It also said, curiously, that the company did not yet have all the necessary documents about the project to make such a decision. This raises certain questions about ENEL’s willingness to come to Kaliningrad – or rather if there is any to begin with. All the information pertaining to the project had been put together as far back as the autumn of 2009, when project documentation was submitted for a state environmental impact evaluation of the Baltic NPP. Surely, then, a situation with lacking this or that part of the paperwork must simply be impossible – unless there is an issue of Italian translators still having trouble finishing their assignment. It is doubtful, though, that, if such translators exist, they have not by now died of hunger.

It is at present also unclear whether the consideration period specified in the 2010 memorandum – and which expired late last April – has been extended, giving ENEL more time for its deliberations.
Concerning this issue, the board asked its shareholders to wait for a written response, which is currently being prepared, the directors said.

With all said and done, there is about just as much clarity with respect to the Italian company’s participation in the Baltic NPP as there was a year ago. The astronomic debts and the onerous current engagements, for which ENEL is yet to find a tangible source of funding, may stand in the way.

And if ENEL does decide to take the plunge, it will have to turn to European banks for a credit, and that in any case makes for a long delay, new feasibility studies – and an opportunity for European environmentalists to step in and convince the banks not to give a project fraught with so many risks and dangers a second thought.

Vladimir Slivyak co-chairs the Russian environmental organisation Ecodefense! and is a regular contributor to Bellona Web. The Russian-language original of this commentary first appeared in a blog on the website of the radio station Echo Moskvy on May 18.