MOSCOW – Russian Environmental groups Ecodefence and Groza yesterday held a protest in front of the building of Rosatom, Russia’s state nuclear corporation, unfurling a 10-meter banner reading “No to New Nuclear Power Plants” and another inviting Rosatom employees to drink iodine, the element causing a run on Japanese drug stores for its prophylactic abilities against cancer causing agents in early radiation exposure.

Published on March 24, 2011 by Andrey Ozharovsky, translated by Charles Digges 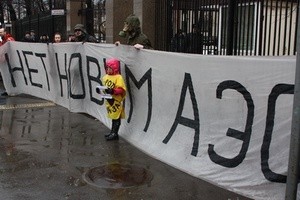 Protestors carried other placards calling for the closure of old nuclear power plants. One of them asked “Mayak, Chernobyl, Fukushima, is that enough?” One activist came donned in a gas mask, another dressed as a monstrous victim of a nuclear accident.

On the side walk leaving up to Rosatom’s entrance laid the placard reading “Rosatom, drink some iodine,” which was weighted down by several bottles of liquid containing iodine. There were no takers among the Rosatom employees who had to cross the advisory sign. 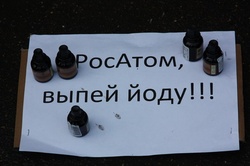 Activists left several bottles on the steps of Rosatom should anyone reconsider.

The press release issued  by Ecodefence confirmed that of the 32 nuclear reactors in operation in Russia, 22 are extremely old and must be decommissioned. Despite the high probability of a Fukushima Daiichi-like accident in Russia, Rosatom continues to extend the engineered life expectancies of its old reactors, in some cases by as much as 15 years, thus ratcheting up the risk.

Reactor No 1 at Fukushima Daiichi had only weeks before received a 10 year operational extension on the 40-year-old unit, despite numerous flaws found by Japanese regulators. The reactor experienced an explosion and a shut down of its back up cooling system after the March 11 quake and tsunami. The reactor had been in service since 1971.

But even new reactors that are under construction hold the possibility of catastrophic accidents and fuel melts in their cores accompanied by releases of radiation.

Following the Fukushima disaster, the nuclear industry in various counties has tried to minimize the consequences of a nuclear disaster, and incantations about how radiation is not dangerous are frequently heard, said Ecodefence. 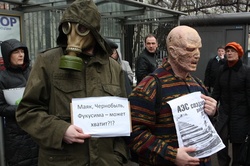 However, last week the European Committe on Radiation Risk announced that 120,000 people around the world were in danger of contracting cancer as a result of the radiation released at Fukushima Daiichi. Aside from contamination in Japan, radiation will spread over a period of several years along with Japanese foodstuffs and products. Trace amounts of radiation have already hit the United States, Iceland, and are further expected in the rest of Europe later this week. Assertions that this radiation carries no danger is, at heart, false: If even microscopic particles of radioactive substances enter the human organism, the risk of cancer is increased. 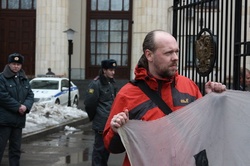 Earlier Rosatom put up Japan as an example of the development of nuclear power, and now it curses it in every announcement. But the bare fact is that what happened at Fukushima Daiichi could happen in Russia even without an earthquake. Catastrophic acts of God or human error could lead to a situation in which power to a nuclear power plant is lost that would cut off the cooling systems. After this, a Japan syndrome becomes a reality, with explosions at reactors and melting of nuclear fuel.

In Russia, a loss of outside power occurred at the Kola Nuclear Power Plant in 1993, at the reactor at the Mayak Chemical Combine in 2000, and during the fires that raged across Russia in 2010, several high voltage lines leading to nuclear power plants were cut off.

“The accident at Fukushima Daiichi is still not over, but has leads to a reevaluation of nuclear power in several counties of the world: Germany, Switzerland, Israel, India, China – this is far from the full list, and it will grow,” Alexei Kozlov, co-chairman of Groza, and a member of the European Federation of Green Parties, said at the rally.

“In Russia, the refusal of nuclear power is also happening, but over these dozens of years, during with old reactors will continue to operate, we risk getting a serious accident at a nuclear power station. If we close the reactors now, we can avoid that risk,” he said.