A local court in Sosnovy Bor – a town in Russia’s Leningrad Region which is home to Leningrad Nuclear Power Plant (LAES) – ruled last December 29 to sustain prosecutors’ motion to order a 40-day halt on construction works at the site of the second line of the power plant, LAES-2. Prosecutors had argued the contractor company failed to remove fire safety and sanitary violations discovered at the site as early as last summer.

Published on January 7, 2011 by Andrey Ozharovsky, translated by Maria Kaminskaya 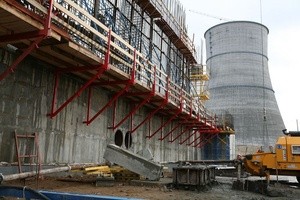 Two cases centred on administrative offences were before the court, which were both the basis for the court’s decision to halt the construction. The head contractor for the LAES-2 project – an entity owned by the Russian State Nuclear Corporation Rosatom, called St. Petersburg Research and Design Institute Atomenergoproekt – was found guilty of administrative misconduct as per Article 20.4, Item 1 (violation of fire safety guidelines) and Article 6.3 (violation of the sanitary and epidemiological protection legislation) of the Administrative Code of the Russian Federation.

“Facts have been established of a lack of a water supply pipeline for service and utility purposes, [and] a temporary sewage system, of an inadequate organisation of power supply, of an absence of a food services area for the personnel, as well as fire water supply required by the law,” a statement by the Prosecutor’s Office for Leningrad Region said. “Given that this is the second time [the defendant] has been brought up on charges of administrative violations, the court ruled to impose a penalty of an administrative halt on activities for the duration of 30 days, as per one of the cases, and 40 days, as per the other.”

“Installation and start-up works have not been completed in establishing fire alarm systems and PA warning systems to issue alerts in case of fires in workmen’s shelters and mobile buildings at the site; administrative and public buildings have not been equipped with automatic fire alarm devices.

No separate mainline fire-fighting water conduit has been provided with fire hydrants to supply water to fire engines, nor any water pumps with a flow rate sufficient for fire-fighting purposes, nor a pipeline for fire prevention with water supply provided from a natural body of water.

Furthermore, a security inspection has revealed significant violations of access control regulations at the site.

Supervisory authorities have also found deficiencies in the organisation of food supply services for the personnel engaged at the construction site: Meal stations lack in size and equipment as per regulations. Refrigerating equipment is absent or not in use.

Inspections at the site have shown a shortage of drinking water at the site as supplied independently by each of the subcontractor organisations. According to expert assessments, bottled drinking water supplied to the site does not meet the requirements of [sanitary regulations and standards].

According to [the press service for the Sosnovy Bor Prosecutor’s Office], the site has not been equipped with water supply, used water disposal, or temporary sewage systems. Similarly, no shower cabins or workwear laundry stations have been provided at the site.”

The information is cause for concern as issues are raised with the main contractor’s ability to follow all the regulations and norms applied to construction of a nuclear power plant in light of its failure, as established by prosecutors and the court, to adhere to the comparatively less taxing requirements of sanitary and fire prevention regulations at the site.

The concern is also with the quality of work performed by construction workers employed in conditions of an inadequate food service and a lack of drinking water supply and sanitary sewer service.

The Public Information Centre for LAES informs – via Rosenergoatom’s official website – that in the month of December 2010, “1,800 workers, 50 vehicles, and 89 units of special machinery were involved in […] schedule[d] work at the construction site” of LAES-2. Five subcontractor organisations have been engaged in construction, the statement said.

Rosenergoatom’s statement cites Ramidin Khanzarov, deputy head of the engineering supervision department of the future LAES-2, as saying works were continuously in progress in December despite extreme snowfall conditions. He said access roads were being cleared of snow several times a day to allow vehicle traffic. The statement, however, makes no mention of problems with sanitary services or fire prevention at the site, nor of administrative charges brought by prosecutors of Sosnovy Bor.

Rosenergoatom also said concreting works were under way at the site throughout December, as well construction of the future evaporative cooling tower.

LAES-2 is being built to an experimental Rosatom project dubbed AES-2006 (for NPP-2006). The new plant is to employ four power units of the VVER-1200 model – a design that has not yet been built or field-proven anywhere.

Rosatom assures of the safety of its new reactor design, while environmentalists continue to be concerned with what they see as preparation for a dangerous experiment unfolding at a site in close proximity to St. Petersburg.

The nuclear authority plans to take the first LAES-2 reactor online in 2013, with the second unit following with a two-year delay in 2016 (contrary to the previously announced schedule, which slated the second launch for 2014).