MURMANSK – That the Kola Nuclear Power Plant (KNPP) is a reliable, safe and environmentally clean energy source for the polar region was the thrust of the dubious message delivered by the plant’s chief engineer, Alexander Ionov, at a conference on renewable energy sources at the Murmansk Economic Forum that wrapped up last week.

Published on October 10, 2010 by Charles Digges 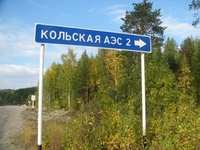 The forum also propelled into the limelight issues surround the building of Kola NPP 2 – a second nuclear power plant for the Murmansk Region – despite the nearly 90 percent opposition of the local population to new nuclear power builds in the Russian far north, according to polls. Talks for including nuclear power in the already environmentally dicey Shtokman gas field project were also renewed.

And yet again, the problems of mounting radioactive waste and spent nuclear fuel went un-discussed while KNPP’s recent safety issues were also swept under the carpet.

The most eye-brow raising assertion made by nuclear industry representatives at the forum, however, was the notion that nuclear power conformed to standards of renewable energy, among other assertions that tried to force the square peg of the nuclear industry into the round hole of truly clean energy.

Ionov’s assertion that nuclear energy is reliable and safe is hard to swallow given that the KNPP recently had three serious incidents in as many months that resulted in automatic reactor shut downs and could be harbingers of far worse things to come. Aside from this, KNPP is one of the most expensive sources of energy on Russia’s Kola Peninsula – modernization of the plant’s equipment last year cost $523 million.

KNPP also does not provide clean energy: the longer the station works, the longer it piles up spent nuclear fuel and radioactive waste, which remains radioactive for tens of thousands of years – a problem that no country in the world has yet been able to safely address.

According to Bellona Murmansk chairman, Andrei Zolotkov, working with nuclear energy is practically impossible without concrete assurances of the safety of the technology and equipment.

“It is doubtful that the current managers or personnel of (Russia’s state nuclear corporation) Rosatom with openly discuss the existing problems,” said Zolotkov. “Decades passed before we heard revelations about the seriousness of the issues of guaranteeing long term, safe storage of many types of waste from the nuclear industry. The current political and economic situation in Russia encourages the ideology of a nuclear renaissance, which Rosatom is taking advantage of,” he said.

The most surprising fact is that the economic conference organisers – the regional administration in Northwest Russia – view nuclear energy as renewable, alongside wind and bio-energy. Tying nuclear energy to renewable energy is, in fact, a contradiction of Russia energy and electricity legislation.

“Frankly, I was very surprised that there was a presentation on the nuclear direction at a conference devoted to the development of renewable energy in the region,” said Bellona Murmansk’s renewable energy project coordination, Yury Sergeyev. “It is odd that the regional administration doesn’t know that, by Russian and international law, nuclear energy does not  possess renewable resources and does not count as renewable energy.”

KNPP prepares to take on a new load

According to KNPP chief engineer Ionov, KNPP plans to raise its coefficient of usable energy from 32 percent to 36 percent by 203-. After the No.3 and No 4 reactor blocks at KNPP exhaust their engineered life spans in the near future, it is planned to extend those life spans by 25 years, leaving the trouble No. 3 block, which suffered three automatic shutdowns in as many months this summer and early autumn, to 2036 and the No. 4 block, presently shut down for repairs, until 2039. KNPP’s plans also include running these reactors at 107 percent.

Ionov said surplus power would be exported to Finland and Sweden, and also used as energy for the realization of the planned development of the Shtokman gas condensate field under the White Sea on Murmansk’s Arctic Shelf – though the project’s developers have not confirmed this yet. The extra power, said Ionov, will also fuel burgeoning industry in the region.

In order to transmit power abroad, it will be necessary to modernize the Murmansk Region’s power lines. Power lines are currently being built from the Murmansk region to the Leningrad Region, where St. Petersburg is located, which allows an electrical throughput capability of 1040 megawatts.

The past few years have seen a large number of reactors at Russia’s nuclear power stations receive experimental “prolonged engineering life spans.” The results of this practice – which many countries, including the United States are undertaking – cannot be predicted even in Rosatom’s optimistic analysis.

“An if something unforeseeable happen, like, for instance, destruction of the hermetically sealed construction of fundamental equipment as a result of the prolonged impact of ionizing radiation, the metal will simply not support it,” said Zolotkov. “Logically, it is necessary to shut down all ‘prolonged’ reactors. What will happen with the energy supply in Rusia and the practice of “prolonged engineering life spans?
Kola NPP 2

The engineered life span of Kola NPP’s No. 1 expires in 2018 and the No 2 reactor’s expires in 2019. There are no plans to prolong them, but there is still the expectation that a Kola NPP 2 will be constructed.

According to Zolotkov, plans for Kola NPP 2 have been on the drawing board for 20 years. Therefore there is no certainty that it will come to fruition. Much will depend on the economic development of the Murmansk Region and the results of other government plans for energy efficiency, energy savings, the adoption of alternative sources of energy, the demand for gas for personal use, and not on sales.

“I hope no one hits on the idea of building a nuclear power plant for selling energy abroad,” said Zolotkov.

The Project Declaration for the construction of KNPP 2 received agreement from Atomenergoproekt, Russia’s reactor building monopoly. Ionov of KNPP told Bellona Web that the KNPP 2 will consist of two VVER-1000 reactors with an output of 1150-1200 megawatts a piece. Their engineered life spans will be 50 years.

“This is a contemporary project, which embodies all the best and which yields nothing to international analogues,” said Ionov. However, at present, such reactors are not in service anywhere and there is little experience with their operation. Preliminary work on the project will begin in 2011. This will primarily be surveying work.

Two locations are under consideration for the new nuclear plant. The first is located two kilometres southwest of the Kola Peninsula city of Polyarny Zori. Ionov said that this site has been entirely surveyed and is perfectly suitable for the construction and operation of a nuclear power station.

The second site under consideration is the Kola Peninsula village of Maloe Olene, 50 kilometres from the village of Teriberka, which is slated to be the base of operations for the Shtokman field project. The advantages of this site, said Ionov, is its proximity to the gas condensate plant that is slated to be built in Teriberka. The licence for the new nuclear power plant is expected to be handed down from the Russian Service for Ecological, Technical and Nuclear Oversight (Rostekhnadzor) between 2011 and 2013.