Despite assurances from nuclear and emergency officials last week that Russia’s record setting pandemic of raging wildfires poses no danger to nuclear installations, radioactive dust and smoke is now a concern as fires reach the areas affected by the 1986 Chernobyl blast and the Mayak Chemical Combine, where radioactive rivers are running dry and spreading contaminated sediment. 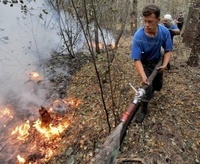 Kremlin leaders are already grappling with Russia’s deadliest wildfires since 1972 and a drought that has destroyed crops after what weather monitoring officials say was the country’s hottest summer in a millennium.

The total area enflamed by wildfires in central Russia had fallen by half since Tuesday, but there were still hundreds of wildfires raging, the Ministry of Emergency Situation (MChS) said in a statement. Yet 612 fires were still ablaze, up from 557 reported on Tuesday, the MChS statement read.

Russian forestry officials on Wednesday finally admitted wildfires are scorching hundreds of hectares of land and forest contaminated by the Chernobyl nuclear disaster around Bryansk, near the Russian-Ukrainian border. 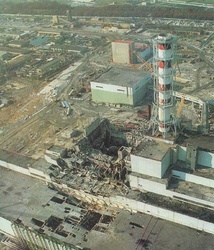 Russia is experiencing its worst ever heat wave that has kept temperatures around 37 Celsius (100 F) for weeks in the capital, throughout Central European Russia, and the lower western edge of Siberia.

Last week in the Voronezh Region, 42 kilometres south of the town of Voronezh in Central European Russia, fires threatened to encroach on the Novovoronezh Nuclear Power Plant. In the Nizhny Novgorod, the All-Russian Research Institute of Experimental Physics, a nuclear research facility in Sarov, was also threatened by the wildfires.

Russian nuclear power plants are typically surrounded by a clear cut barrier of forest to prevent wildfire spread to plants. The Sarov nuclear research facility was evacuated of all explosive and radioactive material.

Two different sources within Rosenergoatom, Russia’s nuclear utility, told Bellona Web differing stories about the danger Novovoronezh NPP faced because of the wildfires, one saying the fires posed little danger to the plant, another saying that the fires posed risks of nuclear power plant shutdowns and power drains.

Environmental groups have excoriated the government for its lack of preparation for fires of this magnitude. At issue is recontamination of Russia’s irradiated areas by fires lifting radioactive particles into the air.

“It is just absolutely crazy that no authority actually warned people living in the regions about problems of radiation re-distribution,” said Vladimir Slivyak, co-chair of the Russian environmental organisation Ecodefence! in an email interview with Bellona Web

“When fires spread to contaminated zones, they lift radioactivity up into atmosphere and the wind distributes it,” he said.

He was also critical of government agencies playing down the dangers of the fires. Yesterday, Gennady Onischenko who heads Rospotrebnadzor, Russia’s consumer protection agency, said that no forests containing radiation were on fire.

“It reminds me 1986 when Chernobyl accident happened – at first officials also insisted there was no radiation problem,” said Slivyak. “And as a result, a lot of people suffered.”

The fires and their locations

Fires covering an area of 92,700 hectares (more than 900 square kilometers) were blazing in Russia, almost half of Tuesday’s figure of 174,000 hectares.

Slivyak put locations to the radioactive fires, saying, “according to  maps of fires for August 9 provided by the MODIS Rapid Response System, radioactive forests were burning in the regions of Bryansk, Tula, Kaluga, Oryol, Lipetsk, Ryazan.”

Forestry officials finally fess up to fires near Chernobyl

Forestry officials conceded in a statement that of five days ago that in the Bryansk region alone 28 fires covering an area of 269 hectares were recorded on the radioactive lands.

But Slivyak said the radioactive fires reach as far back as last month, according to information he obtained from Roslesozaschita, Russia’s forestry agency – which somewhat contradicts what the forestry agency said today.

“A lot of fires registered at contaminated forests near Mayak, even in July,” he said. “Actually, official statistics from forest agency Roslesozaschita says up to 500 forest fires happened in July in regions that are partly contaminated with radiation. It’s not clear how much of this actually approached accumulating radioactivity in the upper level of soil, but it I likely that some fires did – and if it didn’t in July, in August it definitely did.”

Russian Emergencies Minister Sergei Shoigu told reporters on August 5 that in the event of a fire in forests in the Bryansk region, radioactive particles could be propelled into the air.

“It was a fire in the reactor that led to the large consequences of Chernobyl, it meant that the particles were transported thousands of meters into the atmosphere,” he said, adding “Yet that was not a forest fire. But if wildfires begin to burn plants and reactors in the area, we will get a strong proliferation” of radioactivity.

Asked whether fires in the areas contaminated by Chernobyl could bring radioactive particles in the Moscow region, Yelena Popova, the head of Moscow’s radiation monitoring centre, told Reuters the risk was still “theoretical.”

“There is a possibility that winds could bring contaminated air from Kaluga or Tula regions if major fires erupt there,” she said, referring to two Russian provinces a little under 200 km (125 miles) southwest of Moscow that were also polluted by Chernobyl.

Cries of help have also come from the region of the Mayak Chemical Combine in the Southern Urals, Russia’s one operative nuclear reprocessing plant. According to Nataliya Mironova, president of the local Movement for Nuclear Safety, the main concern in her area is evaporating rivers and lakes containing radioactive sediment. Mayak’s Techa River cascade and nearby Lake Karachai have for decades been a dumping points for Mayak’s liquid radioactive waste. 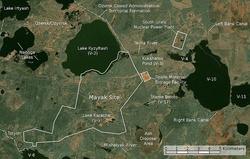 “The problem (surrounding Mayak) is that a lot of radioactivity is released into rivers and lakes. This then lies in the sediment deposits, and when it has been dry in Russia, then the banks are exposed,” to the open air,” said Bellona’s  Boehmer.

“The radioactive particles have previously been protected by the mud or under water, but now they come to the surface. When the fires come, these particles will be taken up into the air,” he said.

Mironova is currently writing an appealing to the regional governor,  for help with – and indeed to draw his attention to –  forest fires, burning bogs and  river evaporation spreading of irradiated silt in the Chelaybinsk Region where Mayak is situated.

“There is a real threat that the situation of 1967, when exposed banks of the contaminated Lake Karachai were spread by whirlwinds carrying radiation that was spread throughout a significant portion of the Chelyabinsk and neighboring regions,” she writes. “This led to the necessary evacuation of several dozen populated areas that were contaminated as a result of windborne radiation.”

Indeed, eyewitness accounts of the evaporation of contaminated water bodies have been forwarded to Bellona Web by Mironova.

One Nataliya Manzurova wrote from Muslyumovo, a radioactively contaminated village that is still undergoing evacuation from a 1957 explosion at one of Mayak’s waste storage tanks, that she had seen obvious falls in the water level of the Techa River.

She went on to report that cattails in the riverbeds were still green but “if they dry out, they could catch fire.”

Manzurova continued that “this is very serious, even more than 1967,” she wrote, adding that the Itryash, a tributary of the Techa, has also seriously evaporated away from its banks, exposing radioactive sediments to the winds.

“I phoned MChS, and they said that the population has nothing to worry about, and that all services are following the situation.”

For Slivyak, Manzurova’s experience typifies the government’s response to the fire.

“I think Russian authorities must accept responsibility for radioactive dangers instead of keeping silence about it,” he said Wednesday. “They should tell (…) that there is likely a problem with radiation and suggest methods of protection,” he said, adding, “And of course, it’s important to determine now where radiation is being re-distributed by wind.”