An energy transformer exploded into bits and pieces at the Kola Nuclear Power Plant located on the Kola Peninsula, in Northwest Russia. The incident led to a 50% reduction of power output from two reactor units leaving onsite spent nuclear fuel storage without energy supply. The authorities at the plant neglected to report about the incident.

Published on February 4, 2010 by Igor Kudrik 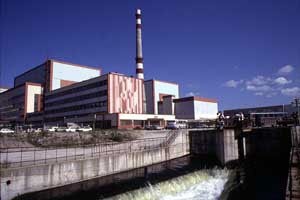 “On January 15, 2010 at 16:48 while the plant was operating at 1433 MW capacity, due to a failure in the energy transformer, two 330 kilowatt electric mains, which supply consumers in the Murmansk region, were switched off. The 3rd and 4th reactor units reduced their capacity to 50% of nominal output in accordance with the guidelines,” reported the press service of the Kola Nuclear Power Plant on February 3rd, 18 days after the incident took place.

But the dry language of the press release disguised the severity of the event. “The failure in energy transformer” was in fact a powerful explosion which completely trashed the transformer, damaging the surrounding facilities in an 80 meter radius. As a result of the damage, not only were two electric mains switched off, but the energy supply to the onsite ponds holding spent nuclear fuel was also cut off, in effect stopping water circulation pumps and water cooling units.

“The incident could have had serious consequences if there was “hot,” or recently unloaded fuel. Insufficient cooling of “hot” fuel can lead to damage in the fuel encapsulation and massive release of radioactivity into the pond with severe consequences,” says Andrey Ponomarenko, Nuclear Project Coordinator at Bellona Murmansk.

“The attempt to first hide the incident from the public, and then try to downplay its significance is an appalling practice,” says Alexander Nikitin, Bellona’s Nuclear Safety Expert. “The reliability of the units and installations at the Kola Nuclear Power Plant is also questionable. The exploded energy transformer was delivered to the Kola plant in 2007!”

Nils Bøhmer, Director of the Bellona Foundation and a nuclear physicist, is concerned with the warning routings between the Russian and Norwegian authorities. The Kola Nuclear Power Plant is located only 200 kilometres from the Norwegian border. The agreement between Norway and Russia stipulates that Russia informs Norwegian authorities about accidents that can lead to transboundary radioactive contamination.

“It would be better if Russian authorities could inform more, rather than less,” says Bøhmer. “The warning agreement should be renegotiated.”

Kola Nuclear Power Plant is located in the south-eastern part of the Kola Peninsula and operates four VVER-440 reactors, commissioned in 1973, 1975, 1982, and 1984, respectively. The two first reactor units are first generation. The 30-year life span design designated for the reactors was extended by 15 years for the first two reactors. The life span of the other two reactor units will be expanded to so that they are in operation 25 to 30 years more.