ST. PETERSBURG – “Nuclear monsters” laid a faux foundation for the Leningrad Nuclear Power Plant 2 (LNPP 2) during a Bellona protest in central St. Petersburg a week after the ceremonial laying of the cornerstone for the actual plant’s first reactor in the town of Sosnovy Bor, 80 kilometres west of St. Petersburg, where the actual nuclear station will be built.

Published on November 2, 2008 by Bellona

“Today’s environmental protest is in response to the fact that construction has begun on a new nuclear power plant near St. Petersburg,” said Rashid Alimov, editor of Bellona Web’s Russian-language pages.

Saturday’s protest was marked by activists dressing up in skeleton masks and hazmat suits to lay cement for the foundation of the new nuclear power plant. 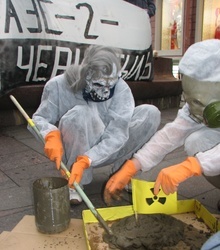 An informational stand set up by the environmentalists listed the fundamental assertions against building a new nuclear power plant near St. Petersburg, which included:

1.) Environmentalists were not allowed to conduct an independent environmental impact study of the LNPP 2 project.

2.) Documents relative to an accident at the original Leningrad Nuclear power  Plant in 1975 remain classified.

4.) Problems of safely storing nuclear waste have not been solved by any country in the world.

5.) There are as yet no plans that have been worked out for the decommissioning of the original Leningrad NPP.

6.) The engineered life-spans for two reactor blocks at the Leningrad NPP were illegally extended without the conduction of an environmental impact study.

7.)  Some 78 percent of Russian are against the construction of new nuclear power plants according to a ROMIR poll.

8.) Even under safe operating conditions, there is a rise of 2.5 times in the chances that children living near a nuclear power plant will become ill with leukaemia.

9.) According to the general city plan, St. Peterburg and its 5 million residents fall within the path of any prospective catastrophe at the Leningrad NPP.