NIZHNY NOVGOROD – Russian anti-nuclear activists from seven cities today gathered in the city of Nizhny Novgorod, some 500 kilometers southeast of Moscow, to protest government plants to build a nuclear power plant in the city, Bellona Web has learned. 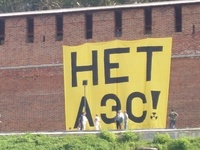 Protestors gathered in the center of the city near Nizhny Novgorod’s Kremlin and unfurled a banner reading “No to the nuclear plant.” Local activists were joined by protestors from Dzerzhinsk, Rostov-on-Don, Yekatrinburg, Moscow, Irkutsk, and Voronezh.

Representatives of anti-nuclear groups from around Russia gathered in solidarity in the fight against the construction of the new nuclear power plant. The protest was organised by Ecodefence, Voronezh’s Groza movement, and the Nizhny Novgorod Anti-Atomic movement.

A banner measuring about 100 square meters was raised on the 12-meter wall of the Nizhny Novgorod Kremlin and remained there for about 10 minutes before police ripped it down.

Prior to the beginning of the protest, Nizhny Novgorod police phoned the activists and tried to force them to abandon the protest, but activists brushed off the pressure.

The protest progressed peacefully and no arrests were made. The 12 activists who participated in it have so far not been arrested in its wake.

“A repeat of Chernobyl is possible on the banks of the Volga” where Nizhny Novgorod is situated, said Andrei Ozharovsky, a physicist and engineer with Ecodefence. “The nuclear power plant is a radiation hazardous installation – there is no guarantee that an accident will not happen, or even a catastrophe,” he said.

“In the event of an accident or incident our region will suffer unjustifiable damage, ecological refugees will appear, contaminated zones, evacuation zones, and people don’t want that.”

“The authorities are taking the line of the nuclear lobby, arguments of opponents of the nuclear power plant are being ignored, and this is not right. It is an important problem, therefore we are doing everything to attract attention,” said Levashov during the protest.

“Building nuclear power plants is an economic trap. The nuclear power station will produce dangerous nuclear waste, for which there are no safe means to handle,” said Viktoriya Gromova, a representative of Voronezh’s Groza movement at the protest.

“When the waste piles up significantly, storing it in the territory of (the Nizhny Novgorod) region will be dangerous and cash consuming matter. Nuclear electricity will then become too expensive. We think it is far better to conserve energy and develop the use of renewable energy, which do not create unsolvable problems for coming generations.”

Protestors demanded that Nizhny Novgorod governor Valery Shantsev and his government call of their plans to prepare for the construction of the nuclear plant, and further called for Russia’s state nuclear corporation Rosatom to stop building dangerous plants.

Nizhny Novgorod concluded an agreement with Rosatom to build the plant. The site for the plant has not yet been chosen, but one possible location is in the Uren district of the Nizhy Novgorod region, east of the city of Nizhny Novgorod.

According to a December 2007 poll conducted by the ROMIR agency, which is associated with Gallup, 62 percent of Nizhny Novgorod residents don’t support the possible construction of a nuclear power plant.

In the 1990s, massive protests and the absence of a 100 percent safety guarantee halted the construction of the Gorkovskaya Nuclear Heating plant. Activists in Nizhny Novgorod believe they can repeat this achievement.

Anti-nuclear protests in the Nizhny-Novgorod region – among them a recent anti-nuclear camp near the half-builf Gorkovskaya station – are a regular occurrence. Resident of the region have sent Russia President Dmitry Medvedev more than a thousand postcards demanding that no nuclear power plants be built in their regions.

But, where the 1990s were a decade of loud protests against nuclear construction, the Russia press – with the exception of independent newspapers like Novaya Gazeta – have all but ignored recent protest efforts, and support the government’s push forward with optimistic prognoses for Russia’s nuclear future, whether the population wants it or not.

Indeed, despite the peaceful protests in Nizhny Novgorod, anti-nuclear picketing has become more hazardous for activists in the past two years, as arrests and even threats at gun-point from authorities become more frequent.