The Federation Council, Russia’s upper house of parliament earlier this week approved the law approving the unification of Russia’s nuclear agency under one roof, creating a giant “state corporate” monopoly industry for all things atomic. 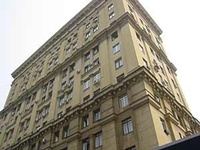 According to the newly approved legislation, a structure for overseeing all aspects of Russia’s nuclear industry – both civilian and military – will be created of Rosatom, Russia’s current Federal Atomic Energy Agency, constituting an enormous jump in power and prestige for the organisation.

All that now remains before the creation of the super corporation is the signature of Russian President Vladimir Putin, which as a Kremlin backed legislation, it is expected to receive.

The powerful new status of Russia’s nuclear industry can be attributed to Sergei Kiriyenko, Rosatom’s current director, who is am skilled, behind the scenes business-oriented government operator who managed to promote Rosatom from being an insignificant agency far down the food chain into an over-arching super-structure reminiscent of the atomic energy of Russia’s Soviet past.

Specifically, Kiriyenko designed the new state corporation along the lines of the Soviet Union’s Minsredmash – the Ministry for Medium Machine Building in its secretive Soviet acronym – which enjoyed virtually unchecked power as a state within a state until the Chernobyl disaster of 1986 forced – in the clearest possible terms– a re-evaluation of the industry.

The law creating the new superstructure and approved by the Federation Council, specially creates a so-called state corporation and outlines its creation outside the walls of federal power in Russia.

The corporation will encompass practically all enterprises that have had some relation to Rosatom, and it’s earlier ministerial manifestation, Minatom, and will be divided, roughly speaking, into those enterprises that can bring in their own money, and those that will live on government hand-outs.

The corporation’s chief executive will be hand picked by the president, and the corporation will be responsible for forming its own funds, as well as licensing and control bodies relative to the nuclear industry. The corporation is also given sole discretion and enormous authority to “defend,” or classify, information relative to its undertakings.

“We take the formation of such a corporation as the first step toward privatising the (Russian) nuclear industry,” said Alexander Nikitin, chairman of Bellona’s Environmental Rights Centre in St. Petersburg.

Bellona offers analysis of the corporation, its new structure, economics and authority in its position paper on the Rosatom state corporation.