Published on September 26, 2006 by Charles Digges 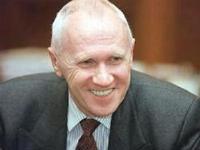 Both the 55-year-old Kaushanky and Adamov, 67, have been charged by the Western Pennsylvania Federal District Court with some 20 counts of conspiracy and tax evasion in an elaborate scheme to allegedly launder US nuclear aid money. Until yesterday, both maintained they were completely innocent of all charges. Adamov still maintains his innocence, despite the uncomfortable revelations of his business partner.

Initially, Kaushansky – who immigrated from Ukraine in 1979 and is now a US citizen – was accused by the US Attorney’s Office of helping Adamov steal more than $9 million in aid money from the US Department of Energy (DOE) and was charged with 20 counts of conspiracy, fraud and money laundering.

Yesterday’s plea by Kaushansky before Senior US Federal District Judge Maurice Cohill included just nine of the original 20 counts against him, the Pittsburg Post-Gazette reported. Kaushansky’s lawyer, Fred Thieman, told the paper that he expected the additional 11 charges to be dropped at sentencing.

"We always denied that there was any type of scheme or fraud to skim money from the Russian science agencies," Thieman said.

Russian prosecutors would not comment Tuesday on how – or if – the Kaushansky confessions would strengthen their case against Adamov, saying they were not allowed to discuss on-going investigations.

But Timofey Gridnev, Adamov’s Russian lawyer, said Kaushansky’s mea culpa would not influence the outcome of his client’s trial at all.

“Adamov did not take part in declaring taxes of the American companies, and he was never accused of not paying his personal taxes,” Gridnev said.

Why the guilty plea?
Asked yesterday by the judge why he was pleading guilty, Kaushansky said, "I just decided to admit that some tax-related irregularities were made," the Associated Press reported.

Kaushansky’s sentencing hearing was scheduled for February 5th, but is now expected to take several days because both sides will present evidence about the amount of income for which he tried to evade taxes. Prosecutors say the counts involve income of more than $5 million, but Thieman said it is a fraction of that figure.

Adamov was extradited to stand trial in Russia in early 2006. He was arrested in May 2005 in Bern, Switzerland on a US warrant for his role in the apparent scheme to divert the $9m in US aid to help make safety upgrades to Russia’s 11 RMBK-1000 reactors – the same reactor type that blew up in 1986 at Chernobyl in the world’s worst nuclear power plant disaster.

Adamov served as Russia’s Minister for Atomic Energy from 1998 until President Vladimir Putin fired him in 2001. After his sacking, Adamov was appointed head of the Russian nuclear research institute NIKIET.

Adamov had a tumultuous and controversial tenure as atomic energy minister. During Adamov’s watch, the Russian Duma approved – at the behest of Adamov’s adamant lobbying – a raft of legislation allowing the import of radioactive waste to Russia.

The initial connection between Kaushansky and Adamov
Kaushansky was working as a researcher at Westinghouse Electric Corp. and as a translator when he met Adamov, according to the US indictment against the two.

US authorities initially wanted to try Adamov with Kaushansky on American soil, and filed an extradition request for Adamov with the Swiss government. But Russian prosecutors filed their own extradition request earlier than the United States – a move many observers considered a counter-punch against perceived US plans to obtain Russian nuclear secrets from Adamov.

The Swiss Ministry of Justice returned Adamov to Moscow after 15 months in custody on the grounds that Russia had filed its extradition request first. He was officially charged in a Moscow court last December with fraud and abuse of his post as atomic energy minister. He spent six months in remand before his trial began last month and judges returned the case to prosecutors for further investigation.

The US sketch of the alleged scheme
According to the US attorney’s office investigation, Kaushansky and Adamov joined forces in 1993 – prior to Adamov’s tenure as atomic energy minister – to open a nuclear energy consulting firm called Energy Pool in Pittsburg, which listed Adamov as its director. The company only existed for three months before it was self-liquidated, the Russian news site Gazeta.ru reported.

But for five years, said officials in the US Attorney’s office, US Government funding continued to appear in Energy Pool’s accounts. Millions of dollars were received from the DOE to fund safety upgrades for RBMK reactors being developed by NIKIET.

According to prosecutors, the conspiracy included money laundering through Energy Pool. Adamov would supposedly transfer US aid funding from Moscow to Energy Pool’s account. Overall, US prosecutors allege that some $15m went through Energy Pool, $9m of which was skimmed by Adamov for his own personal use, said Gazata.ru.

US prosecutors allege that the money didn’t go directly to Adamov from Energy Pool, but was rather shuttled to him through two shell companies – Omeka Ltd. and Aglosky International – both of which had bank accounts in the United States, France, and Monaco.

U.S. Attorney Mary Beth Buchanan said in a statement yesterday that the indictment alleges Adamov was primarily responsible for diverting the money, but that Kaushansky "was most directly involved with the concealment and expenditure of those funds."

Adamov’s defence
Adamov’s American attorney, Lanny A. Breuer, has said that Adamov didn’t steal any money, but invested it in other countries to avoid the financial turmoil following the collapse of the Soviet Union in 1991.

“(Adamov) did what they did in those times – he kept a cash account abroad and paid the project funds and for the work of his co-workers at the (NIKIET) institute in Russia with his own means, from bank accounts in Russia to avoid overblown taxes and the interference of criminal gangs,” said Breuer. He added that the defense has documentary proof that the US aid money reached its intended destination, though did not say what this proof was.

In 1986, a shattered RBMK-1000 reactor at the Chernobyl nuclear power plant spewed radiation across much of Europe, contaminated 200,000 square kilometres and forced the Soviet government to permanently evacuate more than 300,000 people. Dozens died within months, and the UN health agency estimated last year that the ultimate death toll from Chernobyl-related cancers will be more than 9,000 – an esitmation that many NGO and anti-nuclear activists consider to be egregiously low.