Adamov proclaims his innocence and accuses ex-partner of ‘sins’

Russia’s fiery former Atomic Energy Minister Yevgeny Adamov challenged Moscow prosecutors in letter to find evidence of wrong-doing in the case of fraud and tax evasion leveled against him and a US partner as a result of an alleged swindle to pocket $9m in US aid for nuclear safety upgrades in Russia.

Published on September 28, 2006 by Charles Digges

He adamantly proclaimed his innocence again at a Wednesday press briefing in Moscow, two days after his former partner, 55-year-old Mark Kaushansky, a Westinghouse employee, pleaded guilty to similar charges in the US Western Federal District Court in Pittsburg, Pennsylvania.

"I am not worried because I am not guilty," Adamov, 67, was quoted by the Associated Press as saying.

He also showed some evidence of trying to distance himself from his former partner by saying Kaushansky had committed "sins" and that Kaushansky had indeed failed to pay taxes.

Kaushansky immigrated to the United States form the Soviet Union in 1979. He was working as a researcher at Westinghouse Electric Corp. and as a translator when he met Adamov, according to the US indictment against the them.

The two allegedly joined forces in business in 1993, five years prior to Adamov’s appointment to the post of Russia’s atomic energy minister when Adamov was still working at the Russian nuclear research institute NIKIET.

Adamov challenges the prosecutor
In his letter to Russian Prosecutor General Yury Chaika, Adamov challenged his Russian accusers to find evidence of criminal wrong-doing in the case compiled against him, the newswire RIA Novosti reported.

According to Adamov, he sent the letter to Chaika immediately after a Moscow court returned the case against him to the prosecutor general for further investigation on the grounds of procedural and other viloations on August 22nd. It is not clear when the trial will resume.

“I suggested the honorable prosecutors analyze the contents of the case to determine whether there was a criminal case or not,” said Adamov at his Wednesday press briefing, according to the Russian news site Polit.ru

If convicted of the charges against him, Adamov faces 10 years in prison.

Adamov was arrested in May 2005 in Bern, Switzerland on a US warrant accusing him of defrauding the US government of $9m dollars from the US Department of Energy (DOE) and various other donors for safety upgrades on Chernobyl-type RBMK reactors.

Adamov allegedly funneled the DOE aid money to himself via a US company called Energy Pool that he established with Kaushansky, and transferred the funding to two shell companies, Omeka Ltd. and Aglosky International, which had bank accounts in France, Monoco and the United States. He was also charged with 20 counts of tax evasion.

After 15 months in a Swiss jail, Adamov was sent back to Russia where he spent six months in a remand jail before he was released on the condition that he not leave Moscow before or during his trial.

Adamov said he had been prepared to cooperate with US investigators, but that they refused to agree to certain conditions – including not insisting that he travel in handcuffs and guaranteeing he would not face physical or psychological pressure, AP said.

He also accused US investigators of trying to put pressure on him to get nuclear secrets and classified information. 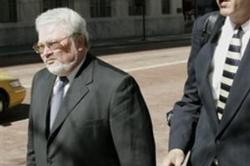 US Federal court accepts plea from Kaushansky
US federal prosecutors maintain that Adamov and Kaushansky stole $9 million from the US DOE, and other countries and corporations by setting up Energy Pool to receive the funding. Energy Pool, a nuclear consulting firm, self-liquidated after only three months but its bank account continued to accrue funds that eventually reached $15m.

Kaushansky pleaded guilty Monday in the Pittsburgh federal court to conspiracy to defraud the US government and eight counts of tax evasion – bumped down from the original 20 prosecutors had initially charged him with.

The US court confirmed yesterday that Kaushansky’s lawyer, Fred Thieman, had struck a deal with prosecutors to drop the conspiracy and money laundering accusations and try Kaushansky only on the tax evasion charges.

Adamov’s Defense
Adamov has never denied that he shuttled the money around among different bank accounts, and said he did so in order to invest it in other countries to avoid the financial turmoil following the collapse of the Soviet Union in 1991.

“(Adamov) did what they did in those times – he kept a cash account abroad and paid the project funds and for the work of his co-workers at the nuclear research institute in Russia with his own means, from bank accounts in Russia, to avoid overblown taxes and the interference of criminal gangs,” said Lanny Breuer, Adamov’s US defense counsel.

Breuer added that the defense has documentary proof that the US aid money reached its intended destination, though did not reveal what this proof was.

Adamov’s Russian lawyer, Timofey Gridnev, has said Kaushansky’s guilty plea to the lesser charges in Pittsburg will not impact the outcome of his client’s trial in Russia.

US Federal Attorney Mary Beth Buchanan said in a statement Monday that the US indictment alleged Adamov was primarily responsible for diverting the money, but that Kaushansky "was most directly involved with the concealment and expenditure of those funds."

Adamov’s checkered past
Adamov declared himself to be a Russian patriot at his press briefing, AP reported.

"We are witnessing, in front of our very eyes, the destruction of the pretty picture which was constructed and which perfectly confirmed the myth … that everything in Russia is for sale, that all authorities in Russia are for sale," he said.

He added that during his tenure in office, "I never once by my side saw thieves or corrupt officials."

But Adamov was fired in 2001 by President Vladimir Putin, and a parliamentary committee accused him of illegally setting up companies inside and outside Russia.