APATITI, Northwest Russia—A protest was staged earlier this week against the governments plans to extend the engineered life-span of two reactors at the Kola Nuclear Power Plant, an extension the Murmansk area Prosecutors Office considers illegal and against which it is preparing documentation for the Prosecutor General in Moscow.

Published on November 10, 2005 by Rashid Alimov 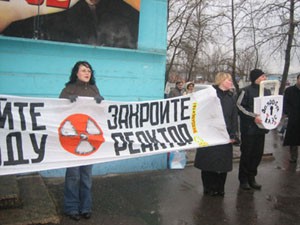 The organisers of the protest from Murmansks Nature and Youth presented the Murmansk Region with a symbolic gift—a huge mock-up lock with which the governor could close the aged reactors at the nuclear power plant (NPP). It was accepted on the governors behalf by his assistant, Aleksei Barabanov.

As announced by the Murmansk prosecutors office, extending the life-spans of reactors No. 1 and 2 at the Kola NPP (KNPP), which was granted by the Russias nuclear regulatory body within the Federal Service for Energy, Technological and Atomic Oversight (FSETAN) was fundamentally illegal: No state environmental impact studies were carried out, nor any public hearings on the issue held, as required by law. Protestors carried placards and banners that read Open the truth—shut the reactor.

The reactor that exploded at Chernobyl was brand new and had been in operation for barely two years. The now-extended first generation reactors and old. Their operation cold turn into a catastrophe any day, said Bellona researcher Igor Kudrik.

But this did not happen. Instead, their operational life-spans, with a few upgrades, were granted. The licence for the their five-year operation extentions—granted by Russias civilian nuclear regulator Gosatomnadzor, FSETANs predecessor—were issued without conducting an obligatory state environmental impact study. Conducting such federal level studies is mandated by the law On environmental impact studies in article 11.

It should be noted that the first extension for the old reactors was issued in summer 2003—almost precisely after former Deputy Minister of Atomic Energy Andrei Malyshev was installed as Gosatomnadzors chief.

He replaced Yury Vishnevsky at this post. Vishnevsky had been an outspoken critic of the former Ministry of Atomic Energy, now known as the Federal Agency for Atomic energy, or Rosatom.

In April 2005, the Murmansk Regional Prosecutor issued a recommendation to annul the violations surrounding the reactor life-span extensions and force regulatory bodies and Rosenergoatom, Russians nuclear power plant operational conglomerate, to carry out the environmental impact studies. But none of these structures did as they were ordered.

The Murmansk Prosecutors again ordered the state structures to fulfil the earlier order, but got only the run around in return. In the near future, the Regional Prosecutor will send documentation on the case to the Prosecutor General in Moscow after a possible court petition regarding the non-compliance with the prosecutors recommendations.

The Situation on the Kola Peninsula
The governor bears responsibility for everything that happens on the territory of the Murmansk region, said Vitaly Servetnik, the coordinator of anti-nuclear projects for Nature and Youth.

A program for decommissioning the Kola NPP must be developed in the Murmansk region as well as a strategy for energy savings and the development of wind power.
At present, energy abounds on the Kola Peninsula. Realising this, Rosatom is lobbying for the construction of an aluminum factory in Kandalashka in order to have an argument against closing the dangerous reactors. The factory would presumably supply the ailing reactors with parts.

A similar initiative was undertaken to justify the extension of the LNPP reactors, however public protest and the lack of any economic benefit from the project brought it to a halt.

The energy power of the Kola NPPs reactors No. 1 and 2 comprise 880 MWts.

The energy lost by taking these reactors of the grid could be temporarily compensated for by thermoelectric energy, as well as with the help of wind energy.

Just using the existent hydropower, windmills could be installed with a power output of 550 MWts, Valery Minin, laboratory chief at the Kola Scientific Centre in the town of Apatiti, told Bellona Web in an interview.

All the prerequisites for joint use of hydroelectric power and wind power are there: The biggest consumption of thermal and electrical energy comes during the winter, and with winter comes maximum intensity winds and minimum flow in freezing rivers. By the same token, both forms of energy could compliment one another.

The yearly wind energy potential on the Kola Peninsula, according to the Kola Scientific Centres data, is 350 TWts per hour. This corresponds to a wind park with a general established power level of 120,000 MWts. The technical resources of wind energy along a narrow seaboard strand (some 15-20 kilometers wide) where the average yearly wind speed is 8 kilometers an hour has been established as producing 125 TWts per hour a year, which constitutes a 40,000 MWt wind park.