The Russian ministry for nuclear energy reports about profit and production increase, plans to intensify its activities, but pays little attention to the environment. 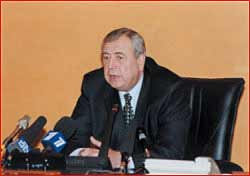 In 2001, Russian nuclear power plants generated 136.4 TWh of electricity. The average load factor was 70.3% in 2001, up 1.2% on 2000, compared with 80% in the West. The Russian power plants managed to operate without incidents rated more than level 0 on INES scale. The incidents quantity reduced from 69 down to 66 rated level 0. According to the northern-European department of the Russian Nuclear Regulatory, the nuclear power plants in 2001 suffered 31 violations in operation: 5 at the Kursk NPP, 7 at the Leningrad NPP, 14 at the Smolensk NPP. 14 incidents involved generators failure. Smolensk NPP equipped with RBMK Chernobyl type reactors experienced three incidents on the same generator. The measures taken were not enough as the main cause was not determined. The quantity of the incidents due to the bad quality pipes discovered during maintenance is still high, 8 incidents.


In 2001, Unit 1 at Volgodonsk (Rostov) went into operation. This event was accompanied by the information that Minatom did not pay to the contractors, and that the unit launch led to the excessive energy supply in the region. Unit 3 at the Novovoronezh NPP was licensed to operate by December, 2006. The unit was put into operation back in 1971. The requirements for operation of RBMK-1000 unit 1 at Kursk were fulfilled, the unit was launched in 1976. Unit 3 at Kalinin is expected to go into operation by 2003, Volgodonsk 2 by 2005 and Balakovo 5 by 2005. Kalinin 4, Balakovo 6, and Novovoronezh 6 are due to go into operation between 2006 and 2010. Construction of the most of the above-mentioned units was stopped in the beginning of 90s.

Minatom’s export of the production and services totalled $2,506.4 million, up 10% on 2000. Technical participation in construction works abroad increased in 2.5 times than in 2000. Minatom will continue building nuclear stations in China, Iran and India.


Construction of unit 1 and 2 at the Tnvan NPP in China continues according to the schedule. 8.5 thousand tons of equipment was delivered to the site.


Memorandum on basic principles of cooperation on Kudankulam NPP construction in India. The Russian company Atomstroyexport and the Indian Corporation on Atomic Energy signed the agreement about NPP construction listing services and deliveries from Russia.


Busher NPP construction site in Iran received 5,000 tons of equipment from Russia. The Russian government approved the initiative of Minatom and the Russian Foreign Ministry regarding development of the cooperation in the area of peaceful application of atomic energy. This project has raised great concerns in the US, which suspect Iran in financing terrorist organisation.


A contract on unit 5 and 6 up-grade at Kozloduy in Bulgaria has been signed and comes in force on July 1, 2002.

Despite all the mentioned achievements, Minatom has nothing special to be proud of regarding environmental safety.