Radiation levels around tanks storing contaminated water at Japan’s tsunami-stricken Fukushima Daiichi nuclear plant have jumped to a new high, increasing by a fifth of measurements reported on Monday, officials have said.

Published on September 5, 2013 by Charles Digges 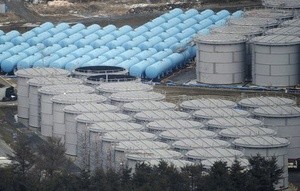 Measurements taken on over the weekend in the same spot revealed readings of 1,800 mSv – also considered to be soaring. Even that level is lethal after an exposure period of merely four hours to anyone without protective gear standing near the leak.

The March 11, 2011 tsunami smashed into the plant after Japan’s north-east coast was rocked by a magnitude 9.0 earthquake. The waves killed almost 19,000 people, while the resulting three-reactor meltdown at Fukushima Daiichi forced some 160,000 people to abandon their homes. Most have not been able to return.

All of Fukushima Daiichi’s primary and back up cooling systems were destroyed when the tsunami hit. This has necessitated the constant pumping of water to cool the reactors and spent nuclear fuel storage pools via improvised means.

The leak, or leaks – Tepco has not yet established which–are coming from 1,000 tanks the utility trucked in to handle the overflow of irradiated water flowing from improvised cooling systems constructed to keep the plant’s three melted down reactors and its spent fuel pools cool.

The leak discovered over the weekend – which was confirmed yesterday as even more deadly – prompted Shunichi Tanaka, chairman of the newly-constituted Nuclear Regulatory Agency (NRA), to announce that controlled dumping of irradiated water into the ocean may be the only way to bring the leakage and flooding to heel.

“Tepco has engaged in a series of quick fixes that it hoped would clear things up, but which are, as we currently see, failing,” said Nils Bøhmer, Bellona’s general director and nuclear physicist. “The tanks seals are supposed to be welded, but over the past days, may have been found to simply be bolted in place, inviting leakage and corrosion.”

Indeed, the Fukushima plant’s proximity to the ocean makes salt-water corrosion to even the welded seals problematic. And further seismic jolts could further damage leaking tanks resulting in further spillage.

According to Japanese nuclear regulatory assessments, the amount of radioactivity contained in the contaminated water tanks is three times that, which was released during the Chernobyl disaster in 1986.

History of the leaks

Other leaks have also been reported, prompting the government on Tuesday to pledge 47 billion yen ($473 million) in funding to tackle the problem.

The spike in radiation levels found on Wednesday was in the same area where the 1,800 mSv level was detected on over the weekend, a spokeswoman from Tepco told Bloomberg.

Neither Tepco nor the NRA could explain the spike in radiation levels, but Bøhmer speculated that radioactive particles or sediments in the ground near the leak could have contributed.

“There could also simply be more radioactivity in the tanks than last weekend’s test revealed,” he said. “There are many variables that could influence the spike in radiation.”

The water that is now being pumped in to cool the reactors has posed enormous storage problems for Tepco.

Just keeping the reactors cool creates an extra 400 tons of contaminated water every day, which is then channeled into the 1000-tank storage farm.

But leaks of contaminated water, both from the tanks, pipes and through damaged structures, have been a persistent problem, beginning as few as three days after the initial disaster two and a half years ago.

Groundwater from the hills surrounding the plant also flows down and into the radioactive areas.

Under the government plan announced on Tuesday, a wall of frozen earth will be created around the reactors using pipes filled with coolant. This aims to prevent groundwater from coming into contact with contaminated water being used to cool fuel rods, which could have devastating effects on drinking water supplies. 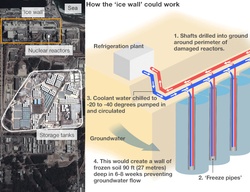 Water treatment systems will, according to the the NRA, also be upgraded to tackle the build-up of contaminated water.

But Bellona’s Bøhmer remained unconvinced that the frozen earth walls will provide any kind of long term solution to protect ground water from irradiated water from the leaking tanks at Fukushima.

“The frozen earth wall is yet another in a series of desperate measures that will not work in the long term,” he said. “It’s also proof that far too many of the efforts Tepco has undertaken are shoddy and improvised with no view to whether they will work in the long term.”

Bøhmer has said that Japan must seek international aid.

“The idea pool in japan is running dry,” he said. “This is why I have continued a drum-beat on how Tepco and the government should bring in international experts with an eye toward more permanent solutions.

Even the government has acknowledged that the new initiative is experimental, untested, unconventional and expensive.

Problem-solving at Fukushima a game of ‘Whack-a-mole’

Toshimitsu Motegi, Japan’s Minister of Economy Trade and Industry (METI), who has offered to put his government structure in charge of the cleanup efforts at Fukushima, called the new effort to build the wall a stop-gap measure comparable to playing a game of “Whack-a-mole,” according to the Kyoto news agency.

Mycle Schneider, a Ottawa, Canada-based nuclear expert, told CNN in an interview that he was “very disappointed” with the wall plan, and, like Bellona’s Bøhmer considers it to be an expensive waste of time and resources.

“This is not a final solution,” said Schneider in a televised interview with CNN on Wednesday. He said that such technologies have only ever been applied on small scales.

Frozen walls as bulwarks against groundwater in mining have been in use since the late 19th century. But Schneider pointed out that the mining industry routinely involved walls of only a few meters. But the frozen wall at Fukushima Daiichi to hold back tides of groundwater from exposure to contaminated water will have to be several kilometers long.

He added that enormous amounts of power are required to keep the wall frozen, which is not ideal for an area that has, since the 2011 disaster, been plagued by power outages.

The most egregious of these power outages occurred in March this year when a rat gnawed its way through cables in a junction box, causing power outages to coolant systems for Fukushima Daiichi’s spent fuel cooling pools.

When workers eventually installed nets around circuitry to prevent rodent incursions, they themselves triggered yet another power blackout that lasted for several hours.

Like Bøhmer, Schneider appealed to the Japanese government to turn get international experts involved in solving the recurring issues at Fukushima Daiichi.

“The situation is not stable,” said Schneider. “We will hear of more leaks and more problems in the months to come.”