Russia, Japan in a tiff over car import contamination concerns

ST. PETERSGBURG –As more troubling news comes from the destroyed Fukushima Daiichi Nuclear Power Plant in Japan, where authorities have sought to update the severity rating for a radioactive water leak discovered last week, Russian officials remain vigilant for possible spread of radiation via means other than contaminated sea water – namely, import of radioactive used Japanese cars over the Russian border. Japan believes these fears to be exaggerated.

Published on August 30, 2013 by Maria Kaminskaya 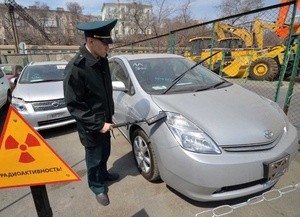 Media reports in early August cited information made available by Russia’s federal customer rights protection agency Rospotrebnadzor as saying that since the beginning of the year, Russian customs authorities have stopped 112 batch lots of contaminated goods, including 80 second-hand cars, 30 batches of spare parts, and two batches of watercraft and specialized equipment, from entering the country after the goods failed radiation tests.

Altogether this year, the agency has examined 135,706 batch lots of goods arriving from Japan for radiation safety, including 91,628 cars and 35,291 batches of spare parts, a statement from Rospotrebnadzor said, according to media reports.

The Russian business daily Vedomosti, in an early August story (in Russian), cited Rospotrebnadzor head Gennady Onishchenko as saying his agency was still worried about the import into the country of “glowing” Japanese cars. Every month, Onishchenko said, according to the paper, some 18,000 cars are imported into Russia from Japan, of which dozens have to be sent back due to elevated radiation levels.

Russia remains a substantial market for used Japanese cars, with the neighbor’s right-hand-drive vehicles being a steady staple in the Russian Far East. Strict radiation control measures, however, have been in place at customs stations at the Russian border since the catastrophe at the Fukushima Daiichi plant in March 2011, when an earthquake and a devastating tsunami wave destroyed the six-unit station’s power supply, triggering core meltdowns, exposing spent nuclear fuel in cooling ponds, and causing massive radiation releases. Efforts to contain the spread of radioactivity from the stricken site are still ongoing.

According to the Vedomosti report, which cited the Russian news agency RIA Novosti, a considerable portion of Japanese used cars imported to the Russian Far East are delivered via the seaport of Vladivostok.

“[Our] specialists keep detecting used and disassembled cars, specialized equipment, and containers with spare parts that show radioactive contamination,” a Russian customs official told RIA Novosti, according to the Vedomosti story. “Since the disaster at Fukushima [Daiichi], 697 such items have been detected [at the port of Vladivostok], 591 were banned from entrance.”

An August 5 story in The Wall Street Journal has additional figures: Citing the Russian Federal Customs Service, the paper reports 43 items contaminated with beta-active radionuclides found in the latest quarter ended June 30. Officials said the numbers are falling, according to the paper: In the previous quarter, 59 contaminated items were discovered; in 2012, the average was 75 per quarter; and, in 2011, 90 tainted vehicles and parts on average every quarter.

WSJ said 300 used vehicles were sent back in 2012. The overall number of used cars exported by Japan to Russia that year was 131,999, the paper said, citing information from the Japanese Ministry of Finance.

Still, Russia’s Rospotrebnadzor remains on the alert. An August 8 Rossiiskaya Gazeta story cited the agency as saying it has received no information from Japan on measures taken to regulate the export of used cars with potential contamination, an issue that Russia and Japan, the story said, are currently discussing.

For its part, Japan seems unconvinced that Russia’s concerns are well warranted. The Wall Street Journal quoted Yutaka Shiota, managing director of the Japan Used Motor Vehicle Exporters Association, as saying to JRT, a WSJ site, that “all used cars to be exported to overseas markets go through the radiation-level check before being shipped out.”

Japanese manufacturers started testing their goods intended for shipping overseas for radiation risks within weeks of the catastrophe at Fukushima Daiichi, in an effort to assuage the importers’ worry over possible contamination. One of the media reports of April 2011, in The Asahi Shimbun, said the Japan Automobile Manufacturers Association established its own radiation testing standards “to try to allay fears abroad.” A spokesman for the association said automakers would inspect radiation inside cars and on tires before shipment, CBSNews reported in late April that year.

While Russia is the largest market for Japan’s used cars, it is the only country that has continued to complain about nuclear contamination, and to send cars back, Shiota, of the Japan Used Motor Vehicle Exporters Association, told WSJ. Given the various trade barriers Russian has imposed on Japan, such as high import tariffs in the past, “they simply do not want to have Japanese cars imported,” the report quoted Shiota as saying.

Rospotrebnadzor head Onishchenko has previously instituted drastic import restrictions on a variety of products shipped to Russia from countries such as Ukraine, Georgia, Belarus, and other exporters – measures that coincided with troubling dips in Russia’s relations with those nations and were broadly interpreted as politically motivated. One was the much-discussed, and recently eased, 2006 ban on Georgian (and Moldovan) wines and mineral water. Some of the agency’s more recent moves were an import ban on Ukrainian chocolates earlier this month and, just this week, a statement expressing concerns over Belarusian dairy imports.

According to The Wall Street Journal, Japan’s shipping companies have voluntarily capped allowable radiation levels for used cars shipped for export at 0.3 microsieverts based on the government guidelines since the nuclear accident. But since Russia has a tighter regulation, the paper said, a limit of 0.2 microsieverts was adopted for cars exported to Russia to avoid the extra cost incurred with return shipment of banned vehicles.

The commonly accepted safe radiation level that stays below the natural background values is 0.5 microsieverts per hour. Bellona has learnt that firms have appeared in large cities in Russia’s Far East as well as the Urals and Siberia that offer Russian motorists radiation inspection services, at about RUR 1,500 ($45) per vehicle, to check their cars for possible contamination.

In Bellona’s information, not all cars that are initially banned for import from Japan are sent back to the country of origin: Upon additional checking, some are in fact admitted across the border.

Yet cases of Japanese car imports banned from entrance for failing radiation tests have been reported outside Russia as well. In mid-May, a container with five cars with detected increased radiation levels was stopped at the border of Kazakhstan and Kyrgyzstan, reportedly on its way from Japan to Kazakhstan, a story by the Russian news agency Rosbalt said.

In February, the WSJ said, Kyrgyzstan returned an undisclosed number of cars to Japan that reportedly exceeded permissible limits for radiation.