Radioactive water at Fukushima poised to overflow into the ocean

Highly radioactive water seeping into the ocean from Japan’s tsunami-struck Fukushima Daiichi nuclear plant is creating an “emergency” that the operator is struggling to contain, according to the country’s nuclear watchdog, the Nuclear Regulatory Authority (NRA) said, according to various reports.

Published on August 7, 2013 by Charles Digges 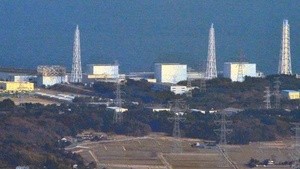 The reports were the first public indication that contaminated water has been seeping into the ocean, as reports indicate that officials have known about the problem for some time.

After a major leak a month after the meltdowns, plant owner Tokyo Electric Power Co. (Tepco) said it had contained the problem and denied further underground leaks into the ocean were occurring, although many experts suspected they were.

Tepco said Wednesday that some of the water is seeping over or around an underground barrier it created by injecting chemicals into the soil that solidified into a wall, the Associated Press reported. But these countermeasures where only intended to be temporary, said the NRA.

This latest problem in trying to bring the still ailing plant to heel involves underground water that has built up over the last month since the company began creating the chemical walls to stop leaks after it detected radiation spikes in water samples in May.

The contaminated groundwater is now rising towards the surface and exceeded legal limits of radioactive discharge, Shinji Kinjo, head of an NRA taskforce told Reuters.

Contaminated water could rise to the ground’s surface within three weeks, the Asahi Shimbun newspaper reported.

Three reactors at the Fukushima Daiichi plant suffered meltdowns after a massive March 2011 earthquake and tsunami destroyed power and back up cooling systems. Rescue efforts at the plant are still running on makeshift equipment and have been plagued by blackouts and leaks from underground tanks.

Bellona’s general manager and nuclear physicist Nils Bøhmer has repeatedly said that the plant will continue to suffer an accrual of accidents such as this for many years to come before technicians and scientists can figure out a way to contain radioactive water and remove contorted and destroyed spent nuclear fuel that resulted from the triple meltdown.

Tepco has been roundly criticized for its failure to prepare for the 2011 tsunami and earthquake that devastated its Fukushima plant, as well as being lambasted for its inept response to the reactor meltdowns. It has also been accused of covering up shortcomings.

An independent government-commissioned report on the accident released in December 2011 in fact ascribed the lions share of responsibility for the accident to human error –10-meter tsunami and 9.0 scale earthquake notwithstanding.

Tepco’s “sense of crisis is weak”, Kinjo was quoted by the agency as saying. “This is why you can’t just leave it up to Tepco alone [to deal with the situation].

“Right now, we have an emergency.”

This latest crisis prompted a panel of officials from local towns and villages to gather at the plant Tuesday to demand that Tepco limit the rising water’s impact on the sea, AP reported.

TEPCO spokesman Yoshikazu Nagai admitted to AP Tuesday the company was slow to deal with the underground water leaks because it was focusing on cooling the damaged reactors, which pose a greater risk.

In the early weeks of the disaster the Japanese government allowed Tepco to dump tens of thousands of tons of contaminated water into the Pacific as an emergency measure. Tepco also inundated the overheating reactors with water cannons and helicopter drops of seawater, causing massive flooding.

The NRA has set up a separate special panel with Tepco and met Friday to discuss how to resolve the mounting water problem. The NRA has urged Tepco not to dump the contaminated water into the ocean, and rather pump it inland as well as to expand underground water and seawater sampling, said the news agency.

AP reported that Tepco was unable to answer many of the NRA’s questions regarding the origin of the current leaks, their routes and how they could be plugged. The AP also quoted Tepco as telling the NRA it had neglected dealing with large amounts of highly contaminated water, which has remained in maintenance trenched since the crisis began.

Tepco is meanwhile building more chemical barriers around the plant to contain the water build up.

It was not immediately clear how much of a threat the contaminated groundwater could pose, though figures cited by AP and Reuters said Tepco estimates nearly 40 trillion becquerels of radioactive tritium – a water soluble element that can affect DNA but is believed to be less dangerous than cesium or strontium – might have leaked into the sea over the past two years.

The amount of contaminated water at the plant increases by 400 tons a day, said AP. Tepco plans to secure storage facilities capable of holding 800,000 tons more water by 2015.

Tepco told Reuters on Monday that caesium levels at an observation post 53 metres from the sea had jumped in the past week. Readings for caesium-134 were almost 15 times higher at 310 becquerels a liter.

Cesium-137, with a half-life of 30 years, was also 15 times higher than it had been five days ago at 650 becquerels a liter, Asashi Shimbun reported.

A much larger spike in radioactive cesium in July in a different well led to Tepco overturning months of denials and admitting that radioactive water had been leaking into the sea.