TOK¥O –On the eve of the second anniversary of the Fukushima disaster – the worst nuclear catastrophe since Chernobyl – thousands of anti-nuclear demonstrators gathered here today to march from the city’s Hibeiya Park and deliver a petition to the Japanese government demanding an end to nuclear power in Japan.

Published on March 9, 2013 by Charles Digges 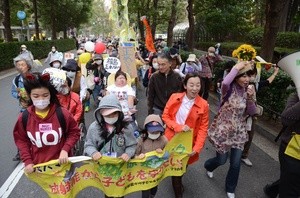 Sunday’s protesters, which according to organizers numbered as many as 40,000, from the elderly to small children and their parents, to the handicapped rallied and bore colourful banners and shouted through bull horns and megaphones demanding a shut down to Japan’s nuclear industry in a festive yet firm demonstration that engulfed central Tokyo.

“The Japanese nuclear industry has a long way to go in regaining public trust as shown by this weekend’s demonstrations,” said Nils Bøhmer, Bellona’s nuclear physicist and general manager, who is in Fukushima and Tokyo with other Bellona staff for the anniversary of the disaster.

“These demonstrations show that there is a broad spectrum of Japanese citizens opposed to nuclear energy, and these protests, which continue on a regular basis, have been somewhat ignored by the world at large,” he said.

Today’s gathering, was the second held this weekend – and a part of the ongoing demonstrations that have been held in front of Tokyo’s parliament each weekend since a triple core meltdown following the March 11, 2011, tsunami and earthquake at the Fukushima Daiichi nuclear power plant.

Marchers also delivered their petition to politicians who stand in opposition to the Liberal Democratic Party of Prime Minister Shinzo Abe, who has reinvigorated Japan’s drive to restart nuclear reactors that were shut down after 3/11, as it has come to be known.

One such politician was former Prime Minister Naoto Kan, who lost his post largely due to his handling of the Fukushima crisis, but who has re-emerged as a member of parliament as a staunch anti-nuclear advocate. Abe overturned Kan’s promise to make Japan nuclear free by 2040. 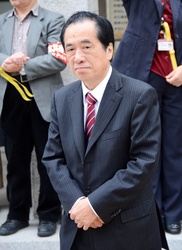 The vast majority of protestors interviews by Bellona were especially concerned by Abe’s government. One told Bellona, “We realize we are dealing with a government that is not sympathetic to our cause,” who added, “This was not the case a year ago.”

But the message from the Japanese public seems more urgent now than it did even a year ago as progress on decommissioning the smoldering, highly radioactive remain of the plant seem ever more distant.

Current estimates are that the plant will not be fully decommissioned for at least 40 years. Central to the problem is the difficult of removing ruined, melted nuclear fuel from reactor Nos 1,2 and 3. This task will require technologies not even invented yet.  Robots and thousands of workers at the site have yet to assess the condition of the fuel.

Conditions for workers at the site are also reported to be miserable. Many of them are subcontractors subjecting themselves to enormous radiation exposure risks for little more than $9 an hour. For this they crawl through a labyrinth of tunnels for hours on end scouring the decimated facility for other dangers that must be brought to heel.

The crisis, two years on, is decdes from being resolved.

His comments were nearly drowned out by a group of mother’s marching with their children, demanding that, “we want clean milk, not radioactive milk,” a reference to several prefectures in Japan reported that their milk and other food shipments had been contaminated with radiation from Fukushima. The milk was pulled from store shelves across Japan when the contamination was revealed.

On top of this, it is clear that new health hazards are emerging. Japanese media have confirmed seven cases of thyroid abnormalities among children in Fukushima who were exposed to the fallout, and humanitarian aid organizations have told Bellona they expect to see that number rise, despite an anemic report released by the World Health Organization last week saying Fukushima residents were at only a “slightly” higher risk of radiation-related illnesses. Three of the children have undergone operations, while the remaining four await a final prognosis, Japanese media reported.

The WHO report was met with a hail of criticism from anti-nuclear groups working in the area, including Bellona, for using skewed projections of cancer rates, and for failing to take into account radiation measurements from some 21,000 cleanup workers at Fukushima, which were submitted to the Japanese government late.

Tokyo Electric Power Co. or Tepco – owner of the Fukushima plant – cited its inability to digitize the workers date in time. Tepco has repeated been accused in Japanese media of altering radiation exposure readings submitted by its contract clean up workers.

Across the street from Japan’s Ministry of Economy, Trade and Industry sat a grouping of tents in which 62-year-old Yoshinori Fukuda had been living for the past 362 days. 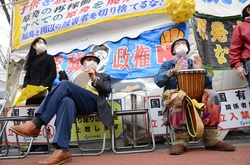 Informally dubbed “Occupy Tokyo,” the tent city, which has stood on the grounds of METI for 565 days, sprang up out of necessity.

“People were pouring inform Fukushima to bring their grievances and worries to METI but were being turned away, being told to wait in the hot summer sun,” said Fukuda.

People here in Tokyo began to bring tents for them to shield them from the blistering Tokyo sun as they waited to have their day with METI, said Fukuda.

For many, that wait began more than a year and a half ago and they are still here.

“Some people come and stay until then are heard out, others leave either with an answer or leave frustrated, but we are here to support them,” Fukuda.

Hope that new nuclear regulations will stop nuclear switch on

At present, only two reactors of Japan’s 50 are in operation, and those are at the Ohi nuclear plant in the central Fukui prefecture, which came back into operation in late summer. The Abe government is seeking to have remainder brought back online.

All of Japan’s nuclear reactors were shut down, or in an idled state when the March 11 earthquake and tsunami hit, but the government of the Fukui prefecture agreed with the federal government to let those two reactors to be switched back on due to scorching summer heat waves and joblessness.

The newly-formed Nuclear Regulatory Authoriy (NRA) in Japan, which displaces regulatory agencies in existence before the Fukushima disaster, had issued a raft of extremely extensive stress tests Japan’s reactors must undergo before allowing them to resume operations.

One of those requirements said the Sustainable Sweden Association’s Lena Lindahl, who has lived in Japan for more than two decades, is that the federal government be required to seek accord with governments at the prefecture level – and this will mean obtaining the permission of the people.

Yet whether the NRA, which is a newly minted organization actually pioneers a trail of regaining public respect or falls the way of its successors remains to be seen, Bøhmer said.

Today’s peaceful but active demonstrations ended in coffee shops across the city as activists relaxed and talked to one another about the days events.

One man of 75 who sat smoking, his placards leaning again his table as he sipped his coffee answered emphatically “No,” when asked if he thought any of Japan’s reactors should be brought back from mothballs.

Lindahl noted that the Fukushima disaster “has brought with it a new more unified voice challenging the government – certainly more than I have ever seen before.”

This article is the first in a series Bellona will be reporting from Fukushima and Tokyo.