Road to Fukushima fraught with ongoing tragedy and innovations ignored

NARAHA, Fukushima Prefecture, Japan –As you progress up Japan’s National Road No. 6 toward the destroyed Fukushima Daiichi nuclear power plant, you are impeded by the slow traffic of demolition vehicles and the virtually unending rotation of buses bearing decommissioning workers from J-Village that are engaged in the tedious day- to-day labor of bringing the still enraged facility to heel.

Despite this teeming parade, no roadside stores are open, and vegetable stands that used to do bumper business are shuttered. Instead, the sides of the road are buttressed by enormous encampments of black trash bags containing lowly irradiated shavings of brush and topsoil contaminated by Fukushima’s multiple explosions. Yet, authorities still don’t know were to deposit these bags.

At the mark of 10 kilometers from the plant, cordons of police wearing surgical masks turn away visitors who have no official permission to proceed further. One can watch at the checkpoint as busloads of fresh decommissioning workers, dressed in characteristic blue suits, are sent into the plant.  You can also watch those returning from their shifts as they lean half asleep, dazed and sweaty against the windows of their buses as they await contamination screening at J-Village, a former soccer complex come emergency deployment center where the decommissioning workers get their daily assignments.

Some 3,000 workers toil in confining radiation suits and exhausting conditions on weekdays. Five hundred continue to ply the business of reducing radiation over weekends. Many do this work for about $9.00 an hour, far less than standard pay for a nuclear worker in Japan.

The rotation is constant, given the limited number of hours workers from Tokyo Electric Power Co, or Tepco – which owns the plant – and their subcontractors, can be exposed to radiation during their shifts.

Radiation measurements at this checkpoint hit 1.3 microseiverts per hour, or 11 millisieverts per year, outpacing zones around Chernobyl on the Belarusian side of the border, where safe levels of one milliseivert per year have been restored, according to Belarusian and Ukrainian nuclear authorities.

The immediate area around Fukushima Daiichi is, in other words, uninhabitable – and not just at the 10 kilometer mark. Between 10 and 20 kilometers from the plant, former residents are only allowed to return to their homes during daylight hours to limit their exposure to radiation. Dozens of apartment complexes, devoid of drying laundry on balconies indicating someone is home, bear witness to the abandonment.

Return to many of these complexes would, in any case, be absurd: The 11 meter tsunami that hit the coastal nuclear plant after March 11, 2011’s 9.0 scale earthquake wrecked many of the buildings, which glower at roadside with smashed windows and barely tenable plywood efforts to restore their lower stories.

The air here tastes bitter. Baton wielding police take down tediously detailed information about those who want to so much as to stand at the crossroads and watch the caravans of rescue vehicles. The police refuse to be interviewed, or to give their location or how far we are from the plant, even though it is clear on any GPS system. 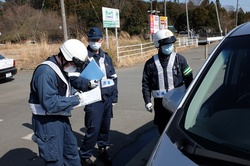 The area is, by any account, still one that reeks of urgency and the tragedy visited on it to years ago.

The stretch between 20 and 30 kilometers is open to more debate, Tatsuya Ito, who coordinates medical efforts throughout the Fukushima prefecture via a vast variety of NGOs he works with, told Bellona over lunch at his office in Iwaki, 43 kilometers south of the destroyed plant.

Ito and the sheer breadth of his affiliations in Fukushima make his avuncular, demure insistence one of the most thunderous voices in Japan speaking for the interests of the radiation calamity’s victims.

Health effects on the evacuated population

Some 160,000 people evacuated the Fukushima prefecture in the days and weeks following the earthquake, and the 11-meter tsunami that wiped out all coolant systems to the plant, causing a triple reactor meltdown. Those within 20 kilometers of the plant were forced by authorities to leave, while those outside that government limit were allowed to leave voluntarily.

“What I see very often is couples who differ in opinion about whether to return home,” said Ito. “One partner will be scared by the radiation levels, while the other will think them negligible – this causes enormous inner-familial stress.”

Such conflicts, he noted, stretch even further into battle-lines between evacuee neighbors, who also partake in vociferous disagreements about returning or not returning, stretching the strings of formerly tightly knit communities to the tautness of fraying piano wire.

“Those who were forced to leave lost community and history” said Ito. “Whether there is any history left to salvage remains debatable and a point of burdensome distress.” 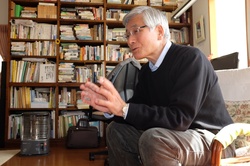 Not even faith left to restore tattered confidence

One forced evacuee was Tokuo Hayakama, a  73-year-old Buddhist priest from Naraha, whose six century-old temple lies directly in the path of the plant’s fallout. He turned to Ito with the wish of reviving his congregation, but Hayakama’s temple is too contaminated and his faithful now too dispersed.

Both Ito and Hayakama, who together have stood in opposition to nuclear power for 40 years, are against Japan’s apparent plans to restart nuclear reactors.

“We think Japan should abandon nuclear power altogether,” said Ito. “With the German nuclear phase out [by 2022], it is clear we are in a position to do this all over the world.”

The Center for People’s Movement Against Nuclear Power, just one of the NGOs with which Ito is affiliated, yesterday filed a class action lawsuit on behalf of 822 people for depriving them of “the right to live in a low radiation area.”

Ito characterized the federal government’s response to the Fukushima disaster, especially the health of the people, as “extremely insufficient.”

“They sloughed off the problem of thyroid screening to the government of the Fukushima prefecture, and two years later we know virtually nothing,” he said.

What is known, according to Ito and Fukushima Medical University is that three people thus far have been diagnosed with thyroid cancer, and another five cases have yet to receive a prognosis.

But Ito excoriated the government for not investing in a thyroid screening program for children and dumping it in the lap of Fukushima Prefecture administration.

He said that of the 360,000 eligible youths in Fukushima, only 142,000, two years down the road, have been medically screened for abnormalities of the thyroid, which is a primary indicator of radiation exposure and cancers. That’s only 42 percent of eligible children.

Ito insisted that screenings of all eligible youths should have been completed at most within a year after the disaster, both for medical reasons and to show a concerted effort by the government ­– whose misreading of the radiation disaster was epic, scattered, and erroneous – to restore some modicum of public trust.

“In my opinion, it is very important to make this initial investment in thyroid screening,” said Ito. He added that when suspicions of curious cancers arose, the government should not have paused to debate the causes as to whether they were related to the plant accident or not, but simply should have treated them.

He said that he could not evaluate whether Fukushima Medical University, which was charged with carrying out the screenings, was actively engaged in suppressing data, as has been suggested by many observers. But he did offer an opinion on how the university comported itself with Fukushima’s public.

“The are aloof, and preface each pronouncement with ‘we don’t think this is caused by radiation,’ which is just a trigger to worry people,” he said, adding that public doubt regarding official pronouncements about radiation is something that has emerged in the two years since Fukushima.

“All announcements from officialdom are treated skeptically – especially because the government so poorly handled initial information about radiation – and this is a totally new phenomenon,” Ito said.“If Fukushima Medical University would simply say they are there in the interest of public health and not hold society at arm’s length, it might dispel suspicions that they have something to hide.”

Money to be made versus health to be maintained

Peeling the onion of the disaster however, reveales that well-heeled interests are in a position to dictate what information is made public and what gets trashed. Not only does Tepco stand to lose many billions more, but so do its subcontractors and investors, as well as anyone else making bank on the disaster, like powerful liquid natural gas suppliers who have made up Japan’s energy deficit while all but two of its 50 reactors have been shut down, said Ito.

The LNG imports have meanwhile driven Japan’s usually robust economy into record trade deficits that have increased yearly from 2011 on.

Ito, through his affiliations with Hamadori, a medical assistance coordination NGO, took on thyroid screening for the Fukushima prefecture village of Futaba, and its population of 6,300.

Of 42 people between the ages of 19 and 39 who where checked by three independent doctors each, one patient emerged as a definite candidate for thyroid cancer. The results of the tiny sample suggest that the larger, perfunctory checks of increased cancer risks carried out by Fukushima Medical University ­­– whose findings of “minimum cancer risks” informed a UN World Health Organization Report released earlier this month – could be well off the mark.

Ito has therefore suggested to the government that it must not only up the tempo but the frequency of screenings for thyroid and other cancers by establishing a fund for Fukushima.

The fund would be comprehensive. Current estimates put a full decommissioning of the Fukushima plant at 40 years from now, and Ito asserted that screenings must continue at least that long.

“The emotional stress on victims is incredible and continues,” he said. “The government must take responsibility for this and keep on with the check ups – only then will we have a reliable pool of data.”

Ito said he had no idea how much such a program would cost – and frankly stated that he did not care.

“That’s not up to me,” he said. “I understand many consider such a plan unreasonable, but that is what I would do.”

The weight of his opinion will hopefully lead to comprehensive and open checks.

Meanwhile the buses of decontamination workers continue their circular route up and down National Road No. 6. They are forbidden from talking to the press, but several workers waved to Bellona reporters as they reentered the fray at the checkpoint. 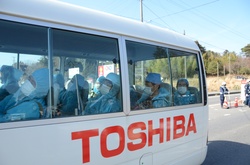 Back at J-Village, positioned 20 kilometers from Fukushima Daiichi – the edge of the mandatory evacuation area – the workers return bedraggled, their bus seats lined with plastic to avoid possible contamination.

Upon return, the are channeled directly into radiation screening before they can officially clock off, and await another shift of crawling through the labyrinth of the Fukushima plant’s highly irradiated tunnels as they try, where robots have failed, to ascertain the condition of the molten radioactive lava.

This is the third in a series of reports by Bellona on the second anniversary of the Fukushima disaster written from Japan.