A spokesman for Tokyo Electric Power Co (Tepco), the company that runs the beleaguered Fukushima plant, which was devastated in the March 2011 earthquake and tsunami, said a rat may have caused the power outage to the plant’s cooling ponds earlier this week 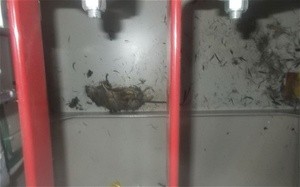 He said the rat may be linked to the power failure, but that more investigation is needed to be sure.

The 15 cm rat was found dead on Wednesday near a switchboard. The company suspects the rodent may have caused a short-circuit in the switchboard, triggering the power cut.

The power outage was a reminder that the world’s worst nuclear disaster since Chernobyl is decades from being resolved.

“We have deeply worried the public, but the system has been restored,” Tepco spokesman Masayuki Ono was quoted as saying by AFP news agency.

Two years ago a massive quake-triggered tsunami caused thre reactors to melt down at the plant.

The plant was brought into cold shut-down mode in December 2011 and Monday’s crisis was the first time since then that so many facilities had been affected by electrical failure at the same time, Tepco admitted, according to the BBC.

The power cut shut down cooling systems for four spent fuel ponds at reactors 1, 3 and 4 on Monday evening, although cooling to the reactors themselves was not affected.

The system cooling water which contained spent – but still highly radioactive – nuclear fuel rods failed and it took engineers some 30 hours to repair the damage.

All cooling systems were operational by early Wednesday morning, Tepco said, according to the Associated Press.

Tepco said it found burn marks on a makeshift power switchboard and a 15cm dead animal nearby. The company released an image of an apparent rodent carcass inside the switchboard unit.

Bellona’s nuclear physicist and general manager said the incident has highlighted the fragility of the rescue operation at Fukushima two years after the meltdowns caused a major release of radiation.

The Japanese government insists that because the reactors are in  cold shutdown they are no longer releasing high levels of radiation.

But company officials admit they are still using makeshift power systems as they struggle to decommission the facility, a process that is expected to take decades 40 years or longer.