TOKYO– For the past few days, I have been traveling with my colleague Charles Digges in the area surrounding the Fukushimi Daiichi Nuclear Power Plant in Japan – the site of one of the world’s largest nuclear accidents, which occurred on March 11, 2011. My impressions of this trip have been manifold, and I will try to summarize some of the most prescient ones.

Published on March 12, 2013 by Nils Bøhmer, translated by Charles Digges 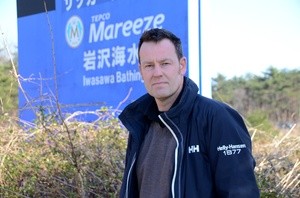 One of the most indelible impressions I carry away from this experience on a professional level is the sheer geographic extent of the accident, as well as how long the fallout will affect the environment and the people who used to live here.

As yet, much of the zone within a radius of 20 kilometers from the nuclear plant remains completely evacuated because of radioactive contamination. In some parts of the zone, locals are allowed to visit their property during daytime, but are not allowed to overnight in their own homes. Nor can they cultivate their land, which previously bore high quality agricultural products.

Instead, decontamination workers now gather contaminated grass, trees and other agricultural materials in large black trash bags, which are deposited at dozens, if not hundreds, of different collection sites for low-level radioactive waste throughout the Fukushima prefecture. This brush cleanup is part of the massive decontamination effort the Japanese government has initiated in an attempt to reduce the impact of the nuclear accident.

Although the Japanese government is investing a great deal of effort into the cleanup process, it remains uncertain as to how the effective the travail actually is.

There are still 160,000 people who were forced to abandon their homes. And a shroud of uncertainty hovers over when, if ever, they will be able to return.

For comparrison, the International Atomic Energy Agency has said that 200,000 people where evacuated from the 30 kilometer radius surrounding Chernobyl, whose 1986 meltdown and explosion has become the benchmark for nuclear accidents ever since.

In an effort to hasten resettlement of the affected area around Fukushima, the Japanese government has said that evacuees can move home when the annual radiation dosage reaches 20 milliseiverts per year.

This contrasts sharply with limits of 1 milliseivert per year for resettlement set by the Ukranian and Belarusan governments following Chernobyl. This disparity of Japanese dose limits, if left to stand, will lead to a relatively high dose load for resettling Fukushima residents that will lead to a gradual increase in cancer statistics in the area.

Uncertainty remains as to the extent that the Fukushima catastrophe has caused an increase in cancer rates in the in the area of the decimated plant.  A recently published report by the UN’s World Health Organization (WHO) stated that a small increase in cancers – particularly thyroid cancers – should be expected among young people.

But the sample group for this study did not include all who were exposed to radiation during the height of the Fukushima accident.

Absent, for instance, are those who were forcibly evacuated from the 20 kilometer radius around the plant. During our conversations with locals in in Fukushima, it emerged that it took several weeks for the massive evacuation to take place ­– and the radiation levels in those now-unpolulated areas was relatively high.

The WHO report also excluded some 21,000 workers involved in cleanup in the most radioactive zone.

The 160,000 Fukushima residents who were evacuated because of the radioactive contamination are not only prone to increased risks of cancer, but are also burdened by tremendous psychological stress over the uncertainty of the invisible danger of radiation, and whether it will ever be possible to live a normal life in the familiar settings of their home surroundings.

After this visit, it is clear to me that the people around Fukushima Daiichi will continue to be affected by the accident for many decades into the future. With the added wounds of the 9.0 magnitude earthquake and tsunami that brought about this disaster, the radiation from the Fukushima plant will prevent area residents from living normal lives for many decades to come.

Nils Bøhmer is Bellona’s general manager and nuclear physicist. This is the fourth in a series of reports by Bellona on the second anniversary of the Fukushima disaster written from Japan.