Published on September 19, 2012 by Charles Digges 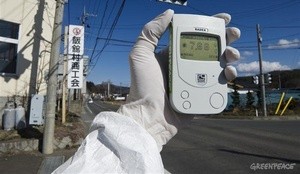 US government environmental monitoring agencies have either declared as safe, refused to comment on, or – say several independent researchers – vastly understated what impacts, if any, this could have for America’s western coastal population. Significant omissions in data reporting and hobbling of radioactive monitoring systems, say many, make it seem unlikely that hard government facts will be forthcoming to support evidence presented by independent researchers.

The new scientific paper, which will be published in November 1 edition of the journal Science of the Total Environment says that its research “clearly demonstrates how little dissipation [of radionuclides] occurred [between March 12 and 16] due to the nature of the rapid global air circulation system.”

The massive release of anthropogenic – or non-naturally occurring radionuclides such as cesium 137 and cesium 134 – by the meltdowns and explosions that rocked Fukushima Daiichi occurred in the five days following the beginning of the accident, the report says.

Simulations of potential dispersion of the radiation cloud conducted by Weather Online Website in the UK showed that air masses were eastwardly displaced from Fukushima after the accident, which put it on a collision course with the US West Coast.

The report goes on to say that “the Fukushima radioactive plume contaminated the entire Northern Hemisphere during a relatively short period of time” after the March 11, 2011 ten-meter tsunami emanating from a 9.0 magnitude earthquake destroyed Fukushima Daiichi’s primary and backup coolant systems.

News reports from the US west coast throughout August indicated that government helicopter were seen flying at low altitudes in cities such as Berkeley, Oakland, San Francisco and Seattle measuring radioactivity in the air, the San Francisco Examiner and MSNBC reported.

The choppers were contracted to measure radiation along the West Coast by the US Department of Homeland Security, which has not released any data about its findings, said the Examiner.

The department has maintained a position that radiation reaching the US West Coast after the Fukushima disaster was insignificant.

“During April, the people in Seattle could have just as easily been in Tokyo for the amount of hot particles that were there,” he told Washingtonblog, referring to microscopic pieces of airborne radioactive material.

Independent reports on radiation dispersion from the worldwide radiation sensor stations operated by the Comprehensive Test Ban Treaty Organization CTBTO, though not as dire as Gundersen’s asserting, confirm enormous and widespread releases of cesium-137, cesium-135 and iodine-131.

“Nine days after the accident, the radioactive cloud had crossed Northern America,” reported the CTBTO. “Three days later when a station in Iceland picked up radioactive materials, it was clear that the cloud had reached Europe.”

By day 15, said the CTBTO, traces from the accident in Fukushima were detectable all across the northern hemisphere.”

A report from March published by the Journal Environmental Science and Technology said the Fukushima radiation plume hit California “with greatest exposure in central and southern California.”

It also noted that Southern California’s seaweed tested over 500 percent higher for radioactive iodine-131 than anywhere else in the US and Canada.

News reports from March indicate that radioactive debris is likewise finding its way to US Pacific shores.

According to Seattle oceanographer Curtis Ebbesmeyer, some 20 million tons of debris has begun to make landfall in the US Pacific Northwest, and he is concerned the debris will bring toxic or radioactive contamination from Japan.

“We are not prepared for this. Nobody is prepared. Nobody has even thought through the dimensions,” Ebbesmeyer told AFP. This is unprecedented in scientific history. “[…] There’s never been a devastation on one continent that has moved off to the other continent and actually recorded.”

Scientists in Alaska are also investigating whether local seals are being sickened by radiation from Japan, reported Reuters, noting that scores of ring seals have washed up on Alaska’s Arctic coastline since July, suffering or killed by a mysterious disease marked by bleeding lesions on the hind flippers, irritated skin around the nose and eyes and patchy hair loss on the animals’ fur coats.

“There is concern expressed by some members of the local communities that there may be some relationship to the Fukushima nuclear reactor’s damage,” John Kelley, Professor Emeritus at the Institute of Marine Science at the University of Alaska Fairbanks, said.

Indeed, washouts of radiation from Fukushima into the sea have been well documented since March 14, 2011, when the aircraft carrier USS Ronald Reagan and other US Navy ships off the coast of Fukushima prefecture were repositioned after the detection of a low-level radiation plume from the devastated plant.

Numerous reports had also cited that Japanese policies of burning radioactive waste from Fukushima are leading to a spike in radiation in rains along the US Pacific Coast.

Whether the reports of radioactive air, water, marine life, and weather reaching the US Pacific Coast in such significant quantities are cause for alarm are unlikely to be substantiated by government agencies.

In the immediate aftermath of the Fukushima accident, the US Environmental Protection Agency (EPA) refused to answer questions or to explain the exact location and number of monitors, or the levels of radiation, if any, being recorded at existing monitors in California, the San Jose Mercury News reported.

On March 21, 2011, the EPA pulled 8 of 18 air monitors in California, Oregon and Washington state that track radiation from Japan’s nuclear reactors out of service for “quality reviews.”

By April, 2011 the EPA had temporarily raised limits for radiation exposure by rewriting its Protective Action Guides (PAGs) to radically increase the allowable levels of iodine-131 by 3,000 times, a 1,000-fold hike for exposure to strontium-90, and a 25,000-fold increase in exposure limits to radioactive Nikel-63.

The EU followed suit by implementing an “emergency” order without informing the public that increased the amount of radiation in food by up to 20 times previous food standards, according to Kopp Online and Xander News. According to EU bylaws, radiation limits may be raised during a nuclear emergency to prevent food shortages.

How will longer term radiation exposure affect the US Pacific Coast?

David Brenner, a professor of radiation biophysics and the director of the Center for Radiological Research at Columbia University Medical Center wrote in the Bulletin of Atomic Scientists in June that the extra individual risks of cancer from long term exposure to radionuclides from Fukushima will be small.

But he added that when the problem is examined not from a perspective of individuals at risk, but rather that of the entire population, the extra risk becomes far more significant.