Vis menyen
Bellona.org > Latest News > Nuclear issues > Nuclear Meltdown in Japan > Japan switching off its last operational reactor for summer in experiment that may shutter its nuclear industry for good

Japan will shut down its last functioning nuclear power reactor this weekend just over a year after an earthquake and tsunami scarred the nation, and if it survives the summer without major electricity shortages, environmentalists and a majority of the country hopes the plants will stay offline for good. 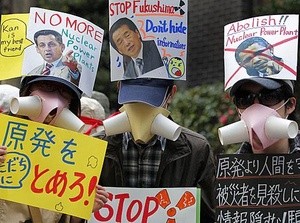 The shutdown leaves Japan, the world’s third largest economy, without nuclear power for the first time since 1970.

As Japan has shut its nuclear reactors one by one for maintenance and stress tests following the devastation of the Fukushima Daiichi catastrophe on March 11, 2011, overwhelming public opposition to nuclear power has prevented any of them from restarting.

The last reactor running, the No. 3 Tomari reactor of Hokkaido Electric Power Co in northern Japan, is scheduled to shut down on Saturday.

None of Japan’s idle reactors will be permitted to go back online while they continue to undergo stringent “stress tests”– simulations designed to test their ability to withstand catastrophic events such as the 14-metre tsunami that knocked out Fukushima Daiichi’s backup power supply, killed its cooling systems and sparked the world’s worst nuclear accident since Chernobyl.

While some experts have criticized the two-stage stress tests as inadequate, an immediate return to even a limited amount of nuclear power now seems impossible, said Bellona’s general director and nuclear physicist Nils Bøhmer.

Public opposition to nuclear power could become more deeply entrenched if non-nuclear generation proves enough to meet Japan’s needs in the peak energy demand of the summer months. Before the Fukushima Daiichi Disaster, nuclear accounted for 30 percent of Japan’s energy.

Japan did manage to get through the summer last year without any blackouts by imposing curbs on use in the immediate aftermath of the earthquake and tsunami.

Factories operated at night and during weekends to avoid putting too much stress on the country’s power grids.

A similar success this year would water down the argument of proponents of Japan returning to nuclear power in the autumn.

Japan has 54 nuclear power reactors, including the six at Tokyo Electric’s Daiichi plant in Fukushima, 4 of which were severely damaged in last year’s 9.0 magnitude earthquake and 14-meter tsunami, culminating in three meltdowns, two hydrogen explosions, radiation spread to land, sea and air, and food contamination.

The ongoing stress tests will determine much of Japan’s energy future, and will likely reveal signs of age and decrepitude, said Bøhmer.

Of Japan’s 54 reactors, 19 are over 30 years old, while only five have been in operation for less than 10 years. The average age of a nuclear reactor in Japan is 25, according to the Asahi Shimbun newspaper.

“At these ages, I doubt that a lot of these reactors are going to pass the stress tests,” said Bøhmer.

The average age of the reactors at Fukushima Daiichi were 38 to 40 years old, according to the Kyodo news agency. The plant’s reactor No. 1 had two weeks prior to the disaster been granted a 10-year operational extension despite warnings from regulators that its diesel back-up generators were suffering from saltwater corrosion.

Too early to celebrate

Anti-nuclear activists plan to celebrate the shut down of the Tomari reactor with demonstrations over the weekend – but questions of how to keep the lights on remain.

Another stupefyingly hot summer is looming for Japan, where temperatures can easily soar above 40 degrees, adding to the public temptation to reach for the air conditioner and hit deep freeze –  ratcheting up the risk of power cuts and yet more disruption for the country’s ailing manufacturers.

Bøhmer noted that, however slight the chance, there remains the possibility that one or two nuclear reactors could be switched back on to meet power shortages.

“Local opposition to nuclear restarts is so strong that I doubt they will restart – they don’t want to push too hard without local backing,” he said. At the same time, local approval is not a requirement for restarting a nuclear reactor.

Nonetheless, warned Bøhmer, the pulse of the national mood will have to be closely monitored. “We could see widespread fatigue with heat, or a spike in job losses because this or that factory cannot operate due to lack of power,” he said.

According to figures from the International Energy Agency (IEA), Japan is running some 10 to 15 percent below its projected energy needs. And that even as oil, coal and gas currently generate some 90 percent of Japan’s electricity, with hydropower accounting for about 8 percent and other renewables – solar, wind, geothermal and biomass – making up the balance, said the IEA.

The Japanese government – already one of the world’s biggest LNG consumers – is therefore trying to make up for that shortfall by importing $100 million, or 4.5 million barrels, of LNG a day to keep up with its energy needs.

“Huge imports of LNG is not an ideal situation if you are trying to phase out of nuclear and into and phase into renewables,” said Bøhmer.

He suggested that ballooning LNG expenditures could be pumped into renewable energy development, creating a burgeoning supply of alternative energy.

“But that is not going to happen before the end of the summer,” he said. In fact, most experts on renewable energy in Japan reckon it will take years, if not decades.

But worries over the risks of nuclear power and concern over carbon emissions from ramped up oil and gas imports are leading many decision makers to view renewable energy such as solar, hydro and wind more positively.

Prime Minister Yoshihiko Noda has pledged to reduce Japan’s reliance on nuclear power over time. And Japan is debating renewable energy targets of between 25 percent to 35 percent of total power generation by 2030, looking to Germany, which raised the proportion of renewables from 5 percent in 1990 to 20 percent by 2010, the Associated Press reported.

But even as experts are enthusiastic, green energy in Japan still faces numerous obstacles and headwinds, the Japan Today newspaper reported.

Besides the nuclear industry’s vested interests in powering Japan, barriers include stifling regulations, a power grid ill-suited to accommodating volatile solar and wind energy, and the huge upfront costs of building solar or geothermal plants – both technologies in which Japan is a world leader.

To help move things along, the government is easing restrictions on land use for solar and wind power. It also is relaxing regulations on small hydropower projects and regulations on drilling for geothermal energy in national parks, Japan Today reported.

More crucially, last week it approved feed-in tariffs that are expected to spur investment by guaranteeing higher returns for renewable than for conventional energy, said the paper.

All the same, most renewable initiatives remain piecemeal, such as a “smart community” plan for Kamaishi, a tsunami-hit city planning to rebuild as an eco-town powered by solar, wind and other renewable energy.

And unlike a European country such as Denmark, which has pledged to shift entirely to renewable energy by 2050, Japan is an island isolated from neighboring countries.

An Asian “super grid,” proposed by Masayoshi Son, a telecoms tycoon and leading proponent of renewable energy, that would link Japan to mainland Asia – and massive wind power capacity in the Gobi desert – will take years and could prove prohibitively expensive, AP reported.

The summer experiment will reveal much about Japan’s future energy generation capacity, as well as the safety and practicality of continuing reliance on nuclear energy

“It will be very interesting to see how japan uses its energy – there is a huge potential for renewables and for better energy planning,” said Bellona’s Bøhmer.