Fukushima one year on: Clean up efforts slowly gaining a toe hold as public trust in government remains low

Published on March 8, 2012 by Charles Digges

Taken alone, each of these stories would constitute major breaking news.

A year on after the catastrophe at Fukushima Daiichi nuclear power plant, they are still just part of the daily information ticker tape coming from the worst nuclear accident since Chernobyl – and testament to a disaster that is still very much in progress.

They also bear witness to what mistakes were made, what lessons remain unlearned, and the sobering truth that nuclear debacles are measured as much by what happened as in trying to predict what cataclysms – human health, massive population displacement, food supply contamination, domestic and world economic tremors, and willful ignorance – are still to come.

Yet, one year after Japan’s nuclear crisis began, researchers say that a strong, evidence-based understanding of the accident, and the risks the reactors continue to pose, is within reach.

But outside observers, and even some critics in Japan, are increasingly worried that the loss of public trust, together with politicians’ desperation to regain it, could undermine rational decision-making about clean up and resettlement – putting at risk more than 100,000 people who were evacuated.

Tokyo Electric Company, or TEPCO, has projected that within 10 years the Fukushima Daiichi site will be cleaned up.

But Bellona’s nuclear physicist and general manager Nils Bøhmer said he was “very skeptical” that will be the case.

An area estimated to be the size of Tokyo will have to be completely rehabilitated. The evacuees from a zone that is still radioactive despite the fact that the plant’s reactors have been brought under control will likely be left to themselves to decide whether returning home is worth the risk. Thousands of tons of radioactive debris will have to be removed with as-yet-to-be-developed technology.

Added to that, a quarter of a century later, Chernobyl continues to pose radiation hazards onsite and topsoil in Belarus, which took the brunt of the radiation after Chernobyl’s No. 4 reactor exploded, is still contaminated.

The crisis began a year ago on March 11, 2011, when a magnitude-9.0 earthquake on the Pacific floor sent a massive wall of water rolling towards the Japanese coastline. The three operating reactors of Fukushima Daiichi’s six reactors automatically shut down in the moments after the quake, but 41 minutes later the tsunami burst through the plant’s defenses – including a sea wall that was determined to be to low – and inundated the reactor buildings.

Water flooded emergency generators leaving the plant without power for cooling systems. One month earlier, regulators had inspected these generators and found them to be suffering from saltwater corrosion – and they agreed with industry officials to keep mum.

With no cooling, radioactive decay continued to heat the reactor cores. In the control room, workers struggled to run crucial instruments, using flashlights and car batteries scavenged from nearby vehicles and to search for emergency procedure manuals, TEPCO admitted in its own report on the accident. 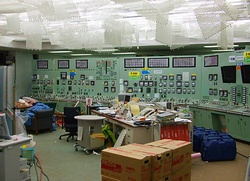 Over the following three days, the last line of emergency systems failed and the three reactors melted down. The process released hydrogen gas, which eventually triggered explosions in the reactor buildings. Volatile radioactive chemicals, notably iodine-131 and caesium-137, began to belch into the air and sea.

Japan initially declared to the International Atomic Energy Agency that the accident scored a “5” on the seven point International Nuclear Event Scale (INES), putting it equal to the Three Mile Island in Pennsylvania in 1979. Later, it upwardly revised its disaster to a “7,” making it the only nuclear accident in history on par with Chernobyl.

When reactor No.4 of the Chernobyl nuclear power plant exploded in 1986, the Soviet government imposed a strict information blackout. The situation at Fukushima was somewhat different: Within hours the government struggled to keep up with new information on radiation readings.

They were joined by TEPCO and a host of domestic and international researchers – often working at cross-purposes.

Most notably, it was discovered that Japan’s Atomic Energy Agency, TEPCO and their watchdog, the Nuclear and Industrial Safety Agency (NISA), had been working in collusion to keep a lot of information out of the public’s reach. Former Prime Minister Naoto Kan acknowledged his government had suppressed and mishandled information.

The saturation of information – true, false, misleading and contradictory – gradually led to extreme mistrust among the public: As radioisotopes spread from the plant, the government was repeatedly forced to raise its recommended safety limits for radiation exposure to citizens and workers – otherwise, it would have been legally required to evacuate the site immediately.

As a result, some in Japan believe that the government is corrupt; others think it is incompetent. Prime Minister Kan stepped down over his handling of the crisis, saying poignantly that his government should have been more open and organized in its public information policies. 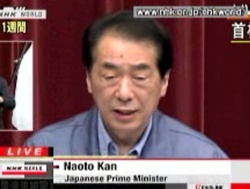 New Prime Minister Yoshikiko Noda has promised to shut down Japan’s nuclear industry in the next 40 years.

The accident itself spurred several other countries to reassess their own energy strategies, most notably Germany, which will shut down all 17 of its nuclear reactors by 2022. The Swiss government followed suit, announcing it hoped to shut down its five nuclear reactors by 2034. Belgium plans to do the same, and Italy voted in a summer referendum not to begin a nuclear program at all.

The prevailing feeling among the Japanese public remains that “what the government says always changes,” a former Japanese government official told Bellona in a recent email interview.

Sorting through the informational debris is Malcolm Crick, secretary of the United Nations Scientific Committee on the Effects of Atomic Radiation (UNSCEAR) in Vienna.

The committee will deliver its preliminary findings in May, and Crick says they should give a general picure of how much radioactivity was released, where it went, and how much workers and the general public received, said Nature Magazine.

In other words, and despite reports on radiation levels from Norway, the International Atomic Energy Agency, TEPCO and the Japanese government, we still just don’t know how much radiation was released and what impact it may have.

“The Fukushima accident was a real eye-opener for the world in several aspects,” said Bellona’s Bøhmer.

“First of all the accident reminded us about the real danger with nuclear reactors – that the unthinkable can and will happen. The accident also shows that even in as technologically advanced a country as Japan, there were several flaws in everything from lack of independent oversight of nuclear operators to flaws in emergency control.”

What remains of the plant

In the immediate aftermath of the accident, operators could do little more than flush the overheated reactors with seawater using fire engines, helicopter drops and improvised pumps. Today, the situation at the plant has improved. Corrosive salt water has been replaced with fresh water, which is passed through a filtration system to remove radioactive cesium before being recycled back into the cores, Nature Magazine reported.

The system seems to be working. Late last year, temperatures at all three reactors dropped below 100°C, leading officials to announce that the plants had achieved “cold shutdown.” Sensors in the bottoms of the reactor vessels show units 1, 2 and 3 to be in the range of 25-60ºC, World Nuclear News (WNN) reported.

The spent fuel storage ponds – which were another major cause of concern in the days following the accident as it could not be established if the water in the ponds had boiled away, exposing the spent fuel rods in storage – are also cool. Cold weather has presented more of a problem to TEPCO in recent weeks, reported WNN. The company is trying to insulate cooling equipment to prevent minor pipe-breaks.

Technicians are now turning their attention to major projects like relocating spent fuel from the ponds and the ultimate removal of the melted remains of the reactor cores, said WNN. The most damaged of the exploded reactor buildings are those housing reactor Nos 3 and 4, where excess debris presents special problems.

TEPCO intends to remotely evaluate the damage to the spent fuel storage pool above reactor No. 4. A recent inspection revealed that some four meters of water remains in the pond. Prevailing opinion is that none of the spent nuclear fuel there is damaged, reported WNN.

All of this radioactive waste will have to be stored onsite at least temporarily, so technicians have been working to repair some broken systems at the plant’s common fuel pond, which holds historic fuel from all six reactors.

The most difficult of the cleanup efforts onsite will be removing the destroyed reactor cores of reactor Nos 1,2 and 3.

“This is a delicate operation because fuel has been melted and has to be taken out by non-standard methods that will also have to protect the workers,” said Bøhmer.

“In such an operation you could lose fuel, causing dangers of chain reactions,” he said.

Removing the melted fuel demands decontamination within the buildings of reactor Nos 1, 2 and 3 as well as certain repairs to the primary containment vessels.

In short, dangers remain. The plant continues to leak cesium into the sea, according to Fukushima Diary, an activist site established by Iori Mochizuki, a 27-year-old civil engineer. Fukushima Diary further reported that the leaks of cesium tainted water are being underplayed by TEPCO, and that Japan’s Meteorological Research Institute indicates the levels are far higher than those being reported by the utility.

So even now, a year later, information supplied by the government and the utility is questionable.

Securing the rest of the country

Meanwhile, Japan has developed a “stress test” to assess the safety of its other nuclear plants. But for now, just two of the country’s 54 reactors are running, Reuters reported.

In an effort to win back the trust of its citizens, the government is planning one of the most extensive and costly cleanup operations ever – an effort some experts view as unrealistic. Last autumn, plans were announced to bring radiation doses from the accident to below 1 millisievert per year in as much of the evacuation zone as possible, which spans a 20-kilometer radius around the plant.

But that goal is based on an international standard for doses received during the normal operation of a nuclear plant, not following an accident.

Veterans of the Chernobyl accident say the best cleanup method is to literally turn over the first meter of topsoil for hundreds of square kilometers surrounding the plant.

But the terrain surrounding the plant is mountainous and wooded, and flipping the topsoil would involve killing the ecosystem, Wolfgang Weiss, a physicist at Germany’s Federal Office for Radiation Protection in Munich and chair of UNSCEAR, told Nature Magazine. 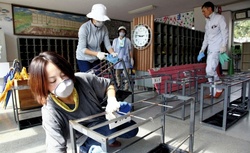 But with no central facility in which to place contaminated soil, such cleanup operations are just creating another localized waste problem.

“People are not allowed to transport the waste, so they put everything in holes on their property,” said Weiss.

But Yoichi Tao, an activist with a background in high-energy physics and teaching position at Kogakuin University in Tokyo who advises grassroots cleanup crews, told Nature Magazine that non-government affiliations attempts at bringing local problems to heel go further in the public’s mind.

“Since March 11, people haven’t trusted scientists who receive funding from the government,” Tao said. “They trust people who act without government funding and who work together with them.”

Another aspect of government control that will fall under question is the practice of prolonging the engineered lifespans of reactors that have reached their 30 to 40 year limits – as happened with reactor No 1 at Fukushima Daiichi two weeks before the tsunami, noted Bøhmer.

Should the practice of granting old reactors license extentions be discontinued, that, in turn, can do much to put nuclear power out of business in the long run, he said.

“The accident will also put more focus on safety when building new reactors, which will result in an even higher building cost for new nuclear reactors,” said Bøhmer

“These two factors, in combination with less public support for nuclear power, would result in a decline of nuclear power generation in the decades to come.”