Vis menyen
Bellona.org > Latest News > Nuclear issues > Nuclear Meltdown in Japan > Half of Fukushima children exposed to radiation say leaked data – but is even that too low?

Half of Fukushima children exposed to radiation say leaked data – but is even that too low?

Information released to the press by an anonymous government official on the results of thyroid gland tests taken on over 1000 children living around the devastated Fukushima-Daiichi nuclear power plant reveal nearly half of them show traces of radioactivity. 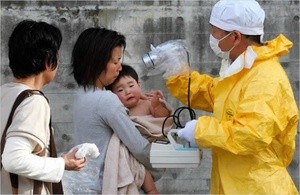 Japan has also allowed one reactor, at the Tomari nuclear power plant on northern Hokkaido Island to resume operations at full capacity, casting doubt on the embattled government of Prime Minister Naoto Kan to assert its wishes for the country to go nuclear free.

The government was forced to responded quickly to the leaked thyroid tests and downplayed the results, saying the findings show that most of the children exposed absorbed very low dosages of radiation.

Leaked data may be red herring

But there is strong evidence to suggest that even the leaked test results are badly flawed in the timing of their data collection and the areas in which they were taken.

Japan’s nuclear watchdog, the Nuclear Safety Commission, recently published on their website the results of the thyroid screenings from the 1000-plus children in the area of the Fukushima Daiichi plant, only to yank the information from its website hours later citing patient confidentiality.

The deletion of the thyroid screen results from the website brought immediate outcry and accusations that the commission was denying the public accurate health information on the worst nuclear disaster since Chernobyl.

Only last Wednesday was there a gathering held for parents and guardians of the children who were tested, and they complained they had been kept in the dark for too long after the test results had been ready, according to the Asahi Shimbun newspaper.

The government said it did not consider informing the families of the detailed results as a priority as no child had shown contamination levels beyond the safety limit.

Is even the leak propaganda?

The new leak of the test results to the press, say some critics, is calculated to deliver reassurances that may not be true.

“Although the Japanese government has earlier apologized for being secretive in releasing information, they are nonetheless continuing with secretive policies,” said Vladimir Slivyak, co-chair of Russia’s Ecodefence and an expert on the Fukushima Daiichi disaster in an email interview.

According to the leaked information, 45 percent of the 1,149 children tested by the government’s nuclear accident task force, ranging from infants younger than 12-months-old to children up to 15 years in age, showed positive for bodily radiation absorption in the aftermath of the disaster.

The tests were taken about two weeks following the March 11 earthquake and tsunami triggered meltdowns, blasts and explosions at the Fukushima Daiichi plant.

One Japanese doctor said the children were not at risk of developing thyroid cancer, but also pointed to the fact that the timing of the tests made the data unreliable.

“The possibility of these children developing thyroid cancer is extremely low” if the findings are reliable, Yoshio Hosoi, a specialist with Hiroshima University’s Research Institute for Radiation Biology and Medicine, said.

But he then acknowledged that the thyroid screenings were taken too late in the crisis to account for contamination from radioactive substances that break down rapidly, such as Iodine 132 and tellurium.

Slivyak contradicted the new assurances that there were no dangers to the screened children.

“All of them are at extremely high risk of contracting cancer at some point,” he said.

“It is difficult to trust the Japanese government when last spring it failed to evacuate people for long periods of time from areas that were highly radioactive,” he said.

Radioactive iodine tends to gather in the thyroid glands of minors in particular, increasing the risk of developing cancer later in life.  The tested children therefore could have been exposed too much higher levels of iodine than they presented with on the days they were tested, given iodine’s rapid breakdown.

The official, who spoke on condition of anonymity via email, said none of the children suffered contamination beyond the equivalent of 0.2 microsieverts (mSv) per hour, the standard set by Japan’s Nuclear Safety Commission.

“Only one child showed a contamination level of 0.1 mSv per hour, the highest of the group,” the official said without giving the child’s sex or age.

The children tested came from three municipalities – Iwaki city, Kawamata town and Iitate village – where especially high levels of radiation had been estimated after the accident, the official said.

But those locales also present challenges to the accuracy of the anonymously released tests: Japan’s government ignored predictions reported by its vast radiation detection and forecasting system, sending hundreds of children and their parents to seek shelter in schools in the town of Naime – northeast of Fukushima Daiichi and directly into the plume of radioactivity released during the first several hours of the crisis.

The official said there are no tests available on possible radiation absorption from that area.

The commission is considering tightening its safety standard to 0.1 mSv.

But like some much throughout the crisis, the new proposed for safety standards may be too little too late, say experts. The Fukushima prefecture government plans to conduct lifetime medical checks for the estimated 360,000 people aged 18 or younger who were in the prefecture at the time of the nuclear accident.