Workers with Tokyo Electric Power Co (TEPCO) are struggling to move more than 100,000 tons of water that has pooled beneath the Fukushima Daiichi nuclear power plant into temporary storage tanks or else, they say, there will be more radioactive spillage into the sea later this month. 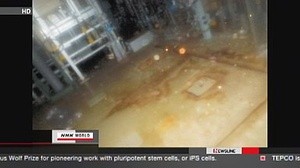 The utility warned that a new inundation of the sea by radioactive water could occur by June 20, the date they predict that temporary water storage facilities will reach their limits.

The potential new leaks of water, especially worrisome as Japan enters its rainy period, is the result of efforts to cool overheating reactors and spent nuclear fuel storage ponds after the back up cooling systems failed.

Fire brigades and the utility struggled against fuel meltdowns by dousing the reactor buildings with sea water fired from water cannons and dropped from helicopters.

The problem with water storage, however, was not unforeseeable, as Bellona’ nuclear physicist Nils Bøhmer pointed out early in the attempts to plug leaks at reactor No 2, which were discovered in April.

When that leak was plugged with a polymer and liquid glass, he noted that the blocked water would just flow to other places and cause more problems, and two weeks ago that was confirmed when new leakage was discovered at reactor No 2.

Bøhmer has predicted that the polymer mixture was only a quick fix to immediately stop highly radioactive water from being released in to the ocean, and that the plant’s coastline proximity to the sea would inevitably mean that containing contaminated water would be one of the most difficult tasks in bringing the plant crisis to heel.

Vladimir Slivyak, co-chair of Russia’s Ecodefense agreed, and said the water containment issues was concerning, especially because of the time constraints involved.

“Every time TEPCO announces trying to improve a situation under a deadline, it doesn’t work out. I don’t think they have the situation anywhere nearly under full control,” he said in an email interview Sunday.

Slivyak suggested that more epic scale events could occur before the situation was considered contained.

“I doubt it will be taken under control in the near future – there is a long road ahead and new discharges of water and radiation await us, even possibly more explosions,” he said.

Workers have been fighting to get the plant under control since a March 11 tsunami and a 9.0 magnitude earthquake knocked out primary power, destroyed backup generators and halted the crucial cooling systems for the reactors, causing the world’s worst nuclear disaster since Chernobyl in 1986.

Several explosions have scattered radioactive debris around the plant, and reactors are puffing radiation into the air. Initial radiation tallies put the amount released by Fukushima during the first three days of the disaster at one tenth that of Chernobyl. New figures have not been forthcoming.

Japanese officials only recently confirmed that the cores of the plant’s reactor Nos 1, 2 and 3 melted and sunk to the bottom of the units within mere hours following the tsunami. The fuel melts, which remain largely uncontained, imply that heavy radiation releases continue.

Can new storage tanks alone do the job?

New storage tanks for water began to arrive on site on Sunday and TECPO officials told press agencies. They said 1500 tons of water was being moved to temporary storage.

Two of 370 tanks presently on their way to the plant arrived Saturday from a manufacturer in nearby Tochigi prefecture, TEPCO said. Two hundred of them can store 100 tons, and 170 can store 120 tons.

The tanks will continue arriving through August, and will store a total of 40,000 tons of radioactive water. But this still falls well short of the 110,000 tons are on the loose at the plant.

As an additional measure, engineers have begun installing equipment supplied by French reactor maker Areva to decontaminate the radioactive water and TEPCO wants to start operating it by June 15.

But if the treatment system does not work, one of the reactors could run out of space to store contaminated water as early as June 20, and it could then spill into the sea. The same could happen to a second reactor a day later, TEPCO said. Officials did not identify the reactors in calls from Bellona Web, but they are thought by other experts who spoke anonymously to be reactor Nos 1 and 2, which have suffered from the most critical water overloads.

Further difficulties with pooled water – which press agencies estimate to be enough to fill about 40 Olympic sized swimming pools – could occur if there are glitches in trying to set up a new cooling system for the reactors.

TEPCO also said robots with cameras that entered reactor No 1 found Friday that steam was spewing from the floor. Nationally televised news Saturday showed blurry video of steady smoke curling up from an opening in the reactor floor, the Canadian Broadcasting System reported.

The radioactive fumes were suspected to be coming from the suppression pool area, which is near the reactor core.

The radiation level near the smoky area reached as high as 4,000 millisieverts per hour, much too high for any human to get near that area, and confirming the formidable obstacles Fukushima workers face in fixing the problems at the reactors.

In early April the utility dumped about 10,000 tons of water with low-level radioactivity into the ocean, prompting criticism from neighbors China and South Korea.

Highly contaminated water leaked for days into the Pacific Ocean from Fukushima Daiichi’s reactor No 2 for days before it was discovered in mid April, contaminating untold amounts of sea life. The leak was sealed with a polymer, but leakage was reported two weeks ago to again be a problem at the reactor.

On May 23, TEPCO issued a belated report that on May 11, 250 tons of water containing some 20 terabecquerels of radioactive substances had leaked into the sea from reactor No 3. The leak continued over a 41-hour period before it was stopped with concrete. TEPCO has yet to issue an explanation of why it waited almost two weeks to disclose the leak.

TECPO, criticized for its poor communication about radiation doses sustained by workers, also confirmed that two workers suspected of having exceeded the government’s radiation exposure limit of 250 millisieverts had indeed surpassed that figure. This level had been raised from the previous emergency exposure level of 100 sieverts in March by the Japanese Ministry of Health.

The unidentified workers were exposed to up to 580 millisieverts during cleanup efforts at the plant, TEPCO official Junichi Matsumoto told a news conference. Exposure to 250 millisieverts is equivalent to more than 400 stomach X-rays, Reuters reported.

Health checks on the workers are said not to have revealed abnormalities, but experts say higher levels of exposure correspond to higher cancer risks. Officials said it was possible that other workers had also exceeded the legal limit.

“We did not have a system in place to manage radiation risks as part of the early response,” Goshi Hosono, an adviser to Prime Minister Naoto Kan, told Reuters.