Tokyo Electric Power Co (TEPCO) said over the weekend that a woman at the embattled Fukushima Daiichi nuclear power plant has been overexposed to radiation, making her the second worker at the plant to be subjected to more than the legal limit. 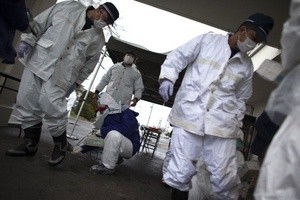 The new case of radiation overexposure comes as mounting evidence that nuclear regulators and the Japanese government operated in cahoots to cover up several fatal flaws at the Fukushima Daiichi plant, which some experts say would have manifested themselves even without the cataclysmic earthquake and tsunami on March 11 that cut off all cooling to the plant – the main cause of the ongoing crisis.

The woman, who received a total radiation exposure of 7.49 millisieverts, hasn’t complained of any health problems so far and will be checked by a doctor on today, the beleaguered utility said, according to the Japan Times.

The nuclear fuel in reactor No 1 is melting with emergency cooling efforts requiring 6 tons of water injected every hour. Radiation being released at the reactor last week were at the highest levels since the disaster began as reported by Bloomberg, with peak levels of more than four times the annual dose allowed for Japanese nuclear workers.

The overcrowded spent nuclear fuel pool at reactor Unit 4 is also suspected to be severely damaged and emergency cooling efforts are failing, said NHK Japanese television over the weekend. This spent fuel pool contains more used reactor fuel than any of the other pools at the complex, with more than 1,500 spent fuel rods.

To make matters worse, the weight of the water being injected into the pool, more than 200 tons, is further compromising the structural integrity of the pool and the containment vessel of reactor said NHK.

The worker in question, who is in her 40s, was found to have suffered more internal than external radiation exposure, with the internal exposure reaching 6.71 millisieverts.

She was providing care to workers who had become sick at a building on site that was being used as the operation center for the crisis, TEPCO said.

TEPCO said the woman may have inhaled particles of radioactive substances that got on the clothing of the other workers in the early stages of the crisis because most of the staff in the building at the time weren’t wearing masks. The woman left the plant on March 15, it added.

The announcement followed a similar one made by the utility last Wednesday in which it said female radiation worker had been exposed to doses far above the limit for women.

That woman had absorbed 17.55 millisieverts of radiation by March 23, the day when all female employees were evacuated from the plant, the Japan Times said.

Tepco also reported Sunday that it has found out that two of its four female employees who are not radiation workers have been exposed to 2.59 and 2.81 millisieverts of internal radiation, respectively.

The legal limit for the general public is 1 millisievert per year, excluding exposure from medical procedures. The total amount of radiation absorbed by the two general employees, who were also working in the makeshift operations center when the crisis began and stayed through March 23, was 3.37 and 3.42 millisieverts, respectively, said the Japan Times.

Meanwhile, two workers who were laying cable at the plant who were briefly hospitalized for alpha ray burns after stepping into puddles of highly radioactive water that no one warned them about, were revealed Saturday to have absorbed nearly 250 millisieverts of radiation.

A Health, Labor and Welfare Ministry ordinance limits individual radiation exposure to 100 millisieverts a year in emergencies. But that level was unilaterally raised to 250 millisieverts on March 15 in a bid to keep enough staff on hand to deal with the nuclear crisis at the plant.

As the workers reach their dosage limits and TEPCO’s subcontractors refuse to exceed the 100-millisievert pre-crisis limit, the utility is reportedly attempting to recruit volunteers with high pay to jump in to the plan to help with short repairs requiring only brief exposure to the high radiation at the plant.

Within this framework, TEPCO is planning to triple from about 1,000 to 3,000 the number of staff nuclear workers and subcontractors battling the crisis to reduce each individual’s radiation exposure, Agency France Presse reported.

TEPCO said to date that a total of 21 workers had been exposed to more than 100 millisieverts by the end of March, United Press International said, citing Kyodo.

TEPCO also announced plans to build new a wall about two metres (six feet) high and 500 metres long, made of rocks contained by wire mesh to better protect it from earthquakes and tsunami’s, said AFP, but whistleblowers accounts are revealing the wall in place when the March 11 disaster hit should have been far higher.

This is not the least of the cover-ups surrounding the integrity of Fukushima Daiichi that has come to light in recent days. Kei Sugaoka, a Japanese-American nuclear inspector who had done work for General Electric at Fukushima Daiichi has revealed the collusive ties that bind the Japan’s nuclear power companies, regulators and politicians.

In 2000, Sugaoka told Japan’s main nuclear regulator about a cracked steam dryer that he believed was being concealed. If exposed, the revelations could have forced TEPCO to undertake costly repairs – which it did not.

After officials divulged Sugaoka’s name, blackballing him from the industry, regulators told TEPCO itself to use their own workers to inspect the reactors at Fukushima Daiichi.

Regulators then allowed the company to keep operating its reactors for the next two years even though, as an investigation ultimately revealed, its executives had actually hidden other, far more serious problems, including cracks in the shrouds that cover reactor cores.

For several weeks, an ex-government official in Japan, as well as Western experts, have argued that inconsistent, nonexistent or unenforced regulations played a role in the accident – especially the low seawalls that failed to protect the plant against the tsunami and the decision to place backup diesel generators that power the reactors’ cooling system at ground level, which made them highly susceptible to flooding.

A 10-year extension for the oldest of Daiichi’s reactors suggests that the regulatory system was allowed to remain lax by politicians, bureaucrats and industry executives single-mindedly focused on expanding nuclear power. Indeed, regulators who pointed out stress cracks in the back up diesel generators, which would make them particularly vulnerable to seawater, were ignored.

Regulators nonetheless approved the extension beyond the reactor’s 40-year operational limit just weeks before the tsunami despite warnings about its safety and subsequent admissions by TEPCO that it had failed to carry out proper inspections of critical equipment. No diesel back up was available to cool reactors after the tsunami hit as the generators were, predictably, flooded.

The mild punishments for past safety infractions has reinforced the belief that nuclear power’s main players are more interested in protecting their interests than increasing safety. In 2002, after TEPCO’s cover-ups finally became public, its chairman and president resigned, only to be given advisory posts at the company.

After a temporary shutdown and repairs at Fukushima Daiichi, TEPCO resumed operating the plant.

In one of several reports emerging in western media about the web of connections between the nuclear industry and government officials, the New York Times reported that the collusion and mutual back-scratching is popularly referred to in Japan as the “nuclear power village.”

An ex-Japanese government official who has been speaking in email interviews with Bellona Web through the crisis, said the term was accurate and is used express the opaque, crony interests that underpin the establishment’s drive to increase nuclear power despite discoveries of active fault lines under plants, new projected tsunami rates and sizes and a general and long history of covering up safety problems.

At Fukushima Daiichi and elsewhere, the ex-government official said that safety problems have stemmed from a common source: a nuclear watchdog agency that is a member of the nuclear power village.

Though it is charged with oversight, the Japanese Nuclear and Industrial Safety Agency (NISA) is part of the Ministry of Trade, Economy and Industry, the bureaucracy charged with promoting the use of nuclear power. Over a long career, officials are often transferred repeatedly between oversight and promotion divisions, blurring the lines between supporting and policing the industry, the official told Bellona Web in several email interviews.

The practice is known in Japanese as amakudari, which translates as “descent from heaven.” Top government officials nearing the end of their careers land plum jobs within the industries they regulated, giving Japan’s utilities intimate familiarity with their overseers. Meanwhile, top industry officials are appointed to positions on policy-shaping government advisory panels.

Pre-tsunami promises to crack down on amakudari have yet to be fulfilled.

Some of the more glaring examples of amakudari, the ex-government source told Bellona Web, were the case of Toru Ishida. Ishida became an adviser at TEPCO in January, just four months after retiring as the head of the Agency for Natural Resources and Energy, the ministry organization that promotes the nuclear industry. After becoming a post-tsunami symbol for amakudari, he resigned.

Ishida wasn’t the first senior energy agency official to depart for the utility. Susumu Shirakawa held a senior agency post before he joined the TEPCO board and eventually became a vice president, the source said.

Kazuhiro Hasegawa, a spokesman for Tepco, denied that Ishida’s was an amakudari appointment, adding that the company simply hired the best people. The company declined to make an executive available to various news sources, including Bellona Web, for an interview about the company’s links with bureaucrats and politicians.

A review by the Associated Press of relationships on both sides of the nuclear power establishment shows that industry people ascend to regulatory posts as well.

AP examined the business and institutional ties of 95 people currently at three main nuclear regulatory bodies, either as bureaucrats or members of policy-setting advisory panels. Overall, 26 of them have been affiliated either with the industry or groups that promote nuclear power, typically with government funding. AP also came across 24 people with prior positions at those three regulatory bodies – one-third of whom had connections to industry or pro-nuclear groups.

“Because of this collusion, the Nuclear and Industrial Safety Agency ends up becoming a member of the community seeking profits from nuclear power,” said Hidekatsu Yoshii, of Japan’s fiercely anti-nuclear Communist Party and nuclear engineer who has long followed the nuclear industry.

Will the quake end the collusion?

The aftermath of the 9.0 magnitude earthquake and tsunami may finally persuade a nation long enchanted with nuclear power that intimate ties between regulator and regulated can create significant potential conflicts of interest.

Japan’s chief cabinet secretary and head spokesman, Yukio Edano, promised recently to curb the ability of bureaucrats to depart for jobs at utilities.

“Regardless of whether this is illegal or not, this should not be allowed,” he told reporters.

As Fukushima Daiichi deteriorated into a disaster as serious as Chernobyl, the main spokesman at NISA maintained that the regulatory structure was fine. But after a month, NISA spokesman Hidehiko Nishiyama wavered.

“Our thinking up to now was that safety will be maintained by the same group that both promotes and regulates the industry,” Nishiyama said.