In a surprise announcement that confirmed last week’s rumours, Tokyo Electric Power Co (TEPCO) announced yesterday that most of the fuel in Fukushima Daiichi’s reactor No 1 had melted a mere 16 hours after the March 11 crisis at the plant brought on my a 9.0 magnitude earthquake and 15-meter tsunami. 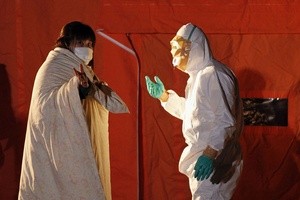 The fuel melted through the bottom of the reactor core, something that can cause a dangerous and uncontrolled chain reaction. A highly placed TEPCO official also said he expected that because the fuel in Fukushima Daiichi’s reactor Nos 2 and 3 is in similar condition, meltdowns likely occurred at those power blocks as well.

Officials with TEPCO, which owns the Fukushima Daiichi plant, said that it took them over two months to reveal the incendiary news of the meltdown because they had only begun to start obtaining detailed data on the temperatures and pressure in the reactor and analyze it in early May – though many nuclear and environmental experts had long concluded that the fuel melt had taken place.

Water that was meanwhile pumped in from the sea and by fire brigades to cool the overheating reactor is reaching uncontrollable proportions as workers battle further spillage.

The confirmation of the meltdown TEPCO led Japanese officials Tuesday to begin evacuating people from outside the 20 kilometer radius exclusion zone around the plant from which some 100,000 people had already been moved in the wake of the disaster.

Many domestic and international environmental groups, as well as the United States Nuclear Regulatory Commission, have for several weeks urged Japan to widen the exclusion zone to as much as 40 to 80 kilometers.

Reactor No 1, the most battered by the ongoing crisis, suffered a hydrogen explosion early in the disaster that many experts, including Bellona nuclear physicist Nils Bøhmer, thought signaled a massive build-up of the gas triggered by a fuel melt, and which would have resulted in damage to the reactor’s containment vessel.

It turned out that those speculations were correct, said TEPCO officials for the first time on Sunday, confirming that a meltdown had indeed occurred – the first such occurrence in a nuclear reactor since Chernobyl, and a scenario that was only narrowly avoided at Three Mile Island in the United States in 1979.

Reactor No 1 has also suffered leaks of radioactive water, announced Thursday, from the tremendous build-up of hundreds of tons of seawater that rescue workers have been daily forced to douse the reactor with after the tsunami knocked out all of their primary and back-up cooling systems.

By Tuesday, the amount of water in reactor No 1 had swollen to an amount that was reported by various press outlets to equal that of an Olympic swimming pool. The discovery has forced officials to abandon their original plan to bring reactor No 1 under control as they focus now on how to deal with the rising pool that some experts see as a threat to groundwater and the Pacific coast.

TEPCO Monday released a detailed accounting of the meltdown that occurred in the reactor.

Based on provisional data analysis on reactor No 1, the company concluded that the water level in the pressure vessel began to drop rapidly immediately after the tsunami, and the tops of the fuel rods began to be exposed above cooling water around 6 pm local time on March 11, the Mainichi Daily News reported.

At around 7:30 pm, the fuel was fully exposed above the water surface and overheated for more than 10 hours, spewing massive amounts of radiation.

At about 9 pm, the temperature in the reactor core rose to 2,800 degrees Celsius, the melting point for fuel.

At approximately 7:50 pm, the upper part of the fuel started melting, and at around 6:50 am on March 12, a meltdown in fact occurred which would account for the extremely high radiation levels registered early in the catastrophe.

The company said that readings showed the water level in the reactor vessel was “lower than five metres below the top of the active fuel, which means the water level was lower than the original bottom level of fuel.” 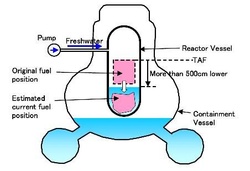 TEPCO also suggested in a statement the fuel assemblies have dropped and are now being cooled.

“It is estimated that the damaged fuel with control rods moved down to the lower plenum in the reactor and they are being cooled there stably,” said the company. As a result of injecting water into the unit, the temperature of the reactor pressure vessel (RPV) has remained between 100 and 120 degrees Celsius, said TEPCO.

By some environmental groups’ estimates, including Russia’s Ecodefence, the Fukushima Daiichi plant released some one tenth of the radiation released at Chernobyl within the first three days following the quake and tsunami.

The Fukushima Daiichi disaster has held at that figure for some weeks, though environmentalists and physicists like Bøhmer have said a final tally on released radiation is still far off.

News of the meltdown at reactor No 1 was an upsetting development for residents of Iitate village, who were told by Chief Cabinet Secretary Yukio Edano more than a month ago they may have to leave their homes as the Japanese government begrudgingly accepted that the their predictions for radiation movement had been thwarted by unpredictable wind patterns.

A touch further than 30 kilometers from Fukushima Daiichi, Iitate was outside the evacuation zone until now.

Because of wind patterns, Iitate and nearby communities have been swathed in high radiation and authorities are not willing to let people stay any longer.

“I’m sure most of you have lived in this village all your lives and have never planned on moving,” mayor Norio Kanno told residents in remarks reported by Reuters.

“To those of you that I now have to ask to pack up and leave your homes, I am deeply sorry.”

After TEPCO, told the Japanese people that things were stabilising at Fukushima Daiichi, it is now clear they knew far less about the situation than they were willing to admit.

About 8,000 Iitate residents and those in the nearby village of Kawamata are being asked to move, joining the tens of thousands who have already been forced out of their homes by the nuclear crisis.

They will be put up in hotels, public housing and evacuation shelters, and no one knows when they will be allowed to return.

Junichiro Matsumoto, another senior TEPCO official, said that “Because there is similar damage to the fuel rods at reactor Nos 2 and 3, the bottoms of their pressure vessels could also have been damaged.”

He said the utility would carry out a similar analysis on the two reactors to that which occurred at reactor No 1.

Hiroaki Koide, professor of nuclear safety engineering at Kyoto University, was critical of TEPCO and its repeated public assertions that nuclear fuel had remained undamaged, contrary to evidence to the contrary that began to mount as soon as the day after the quake.

“They could have assumed that when the loss of power made it impossible to cool down the reactor, it would soon lead to a meltdown of the core,” Koide told the Mainichi Daily News.

“TEPCO’s persistent explanation that the damage to the fuel had been limited turned out to be wrong,” he said.

Reactor had known flaws before it went online

Fukushima Daiichi’s reactor No 1 is of the General Electric Mark 1 design, a reactor known by several nuclear engineers to have a fatal flaw.

Mitsuhiko Tanaka, an engineer who was responsible for implementing the GE Mark 1 design at the Fukushima Daiichi plant in the early 1970s, said in a recent interview that for 40 years, he and others knew the reactor design to be faulty because its containment vessel is too small to adequately withstand pressure build-ups that bore out at reactor No1. Hydrogen explosions also occurred at reactor Nos 2 and 3 – also of the Mark 1 design.

And 35 years ago, Dale G. Bridenbaugh and two of his colleagues at General Electric resigned from their jobs after becoming increasingly convinced that the Mark 1 reactor, which they were reviewing, was so flawed it could lead to a devastating accident.

“The problems we identified in 1975 were that, in doing the design of the containment, they did not take into account the dynamic loads that could be experienced with a loss of coolant,” Bridenbaugh told ABC News in March.

“The impact loads the containment would receive by this very rapid release of energy could tear the containment apart and create an uncontrolled release,” said Bridenbaugh in televised remarks.

Tanaka, who says he turned his back on nuclear energy after Chernobyl in 1986, brought several specific concerns about Fukushima Daiichi’s reactor No 1 in 1988 with no results. Two years later he made his concerns public in a book entitled “Why Nuclear Power is Dangerous.”

The flags raised by the book remained ignored by the government, Tanaka said.