Leak of highly radioactive water at Fukushima Daiichi far from being plugged, and spiking radioactivity suggests yet another core breach

Workers at the Fukushima Daiichi plant are battling to seal a leak of radioactive water directly into the sea surrounding the plant – which has been producing higher and higher measurements of radiation – from reactor No 2, and attempts to block it with concrete have failed.

Published on April 3, 2011 by Charles Digges 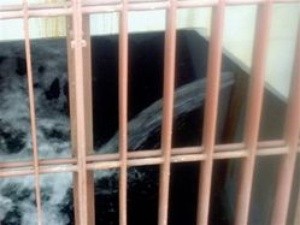 Over the past 10 days, pools of contaminated water have been found throughout the plant and high levels of radioactivity have been measured in the ocean, but this marks the first time authorities said they had found a spot where the water was directly entering the sea.

The leak, said officials, is the most likely cause of the spiking radiation levels they have detected at the plant over the last several days. Authorities discovered water gushing out of a two-meter-deep, concrete-lined basin and into the sea via a roughly 20-centimeter (8-inch) crack.

After attempts to fill the basin with fresh concrete failed, Hidehiko Nishiyama, an official with Japan’s nuclear and industrial safety agency (NISA) said that technicians would work Sunday to plug the leak by injecting a polymer to fill the crack.

Bellona physicist Nils Bøhmer, however, said that even polymers would be limited in their effect.

“This is a stopgap measure,” he said. “Polymers will not be 100 percent effective. It seems impossible that they will be able to stop the leakage.”

He added that the leak itself suggests that the containment vessel for reactor No 2, which suffered serious hydrogen explosion early in the crisis, has been breached.

International nuclear experts also believe that melted fuel in reactor No 1 has caused a “localized criticality,” which is a small, uncontrolled chain reaction that occasionally emits a burst of heat, radiation and a blue flash of light. It is not a threat to the area at large, officials say, but could be deadly for workers.

Added to that are continued difficulties with the spent nuclear fuel storage pool atop reactor No 4, which is entirely exposed to the open air. Officials have now discerned that that there is almost no water left in the pool, meaning the spent fuel within it is melting and emitting massive doses of radiation into the atmosphere.

“Localized criticality in reactor No 1, radiation emissions from the spent fuel pool, the leak of water from reactor No 2 – this situation is far from being stabilized,” said Bøhmer.

A leading international radiation tracking institute, the European Committee for Radiation Risk (ECRR), has urged Japan to widen its radius of evacuation around the plant from 20 kilometers to 100 kilometers to avoid risks of cancer among the 3 million people living in this area.

According to ECRR predictions, 200,000 living within that radius will develop oncological difficulties over the next 50 years. The ECRR says that half of these cases will be diagnosed within the next 10 years, the Russian environmental organization Ecodefence reported.

Some 168 Japanese environmental organizations have appealed to the government to widen the evacuation radius to at least 40 kilometers, said Ecodefence in its blog on the crisis.

“Were Japan dealing only with human displacement from the nuclear event, we would call for a much more robust evacuation zone, but the government needs to tend to everyone,” he said.

TEPCO officials meanwhile said that they had recovered the dead bodies of two plant workers who had been missing since March 11, the day the 9.0 magnitude earthquake and a 15 meter tsunami rocked the plant and the six reactor plant and the northeast coast of Japan.

The plant workers, Kazuhiro Kokubo, 24 and Yoshiki Terashima, 21, are the first employees of the operator, the Tokyo Electric Power Co. (TEPCO), to be reported dead.

TEPCO said the workers were found in the basement of the turbine building connected to the plant’s reactor No 4. The company found the workers on Wednesday, but did not release the details until their families had been notified.

Kokubo and Kokubo are said by TEPCO to have died on March 11 around 4 pm when the 15-meter tsunami hit the plant. TEPCO said they showed signs of tremendous blood loss, and linked their death to the tsunami.

Nishiyama said there had been no progress in slowing the water rushing through the leak, though said a search of the site revealed no other water leaks Sunday.

A picture released by TEPCO shows water shooting some distance away from a wall and splashing into the sea, though the amount of water was not clear.

Pooling water at the Fukushima Dai-ichi nuclear complex – which is believed to ultimately come from the reactor cores – has repeatedly forced technicians to pull back and suspend their work. The new water leak will pose yet new dangers for workers who daily make nearly suicidal trade offs to continue their efforts to cool the toxically and lethally smoldering plant.

Nishimaya said a second attempt to plug the crack using a polymer will begin after a TEPCO representative analyzes the site on Sunday and decides which type of polymer to use. The polymer would possibly create a seal farther up in the system.

The air above the radioactive water in the pit is measuring 1,000 millisieverts of radiation per hour, according to Nishiyama, which is more than 330 times the dose an average resident of an industrialized country naturally receives in a year. Above the pit, the level was 250 millisieverts per hour.

Risk of cancer is greatly increased by exposure to 500 millisieverts over a short period of time.

“The measurements above the pit and in the water are simply too high to be accounted for but anything but a core rupture in reactor No 2,” said Bellona’s Bøhmer.

A nuclear plant worker who fell into the ocean Friday while trying to board a barge carrying water to help cool the plant did not show any immediate signs of being exposed to unsafe levels of radiation, nuclear safety officials said Saturday, but they were waiting for test results to be sure.

Fishing in the area has been suspended since the earthquake and tsunami, threatening a staple of Japan’s food resources.

Nishiyama said that the leak was likely behind the elevated radiation levels near the shore found in recent days. The government announced Saturday that higher than normal levels of radioactive materials were detected about 15 kilometers south of the plant, much farther than had previously been reported.

TEPCO had earlier claimed that contaminated water found to be leaking into the sea last week would quickly dissipate in the ocean. This has not proved to be the case

The leak, found at a maintenance pit holding power cables near reactor No 2’s water intake is a fresh reminder of the dangers of the strategy to cool the plant’s reactors and spent fuel storage pools by pumping hundreds of tons of water a day into them. While much of that water has evaporated, a significant portion has also turned into dangerous runoff.

Japanese authorities have said they have little choice but to continue the massive pumping effort at the moment because the normal cooling systems at the plant are inoperable – despite efforts to supply them with electricity from a power grid – and more radioactive material would be released if the reactors were allowed to melt down fully or if the rods caught fire.

“It is our hope that we can stop the emissions of radioactive materials at the latest in several months” at the power plants, Goshi Hosono, a member of the ruling party who is an envoy between the government and TEPCO, told the New York Times.

Rescue workers frightened for their health

One worker from inside the plant, who spoke anonymously with ABC News, drew attention to safety concerns, such as not having enough radiation-detection devices available for workers. The devices alert workers of too much exposure.

“Since the number of monitors is limited, only one or two devices are handed to each group,” the worker told the news network. “But sometimes you have to move away from that person and in that case you’ll never know the level of your exposure.”

He said workers are worried about their health.

“Some workers called it quits and just left for home,” he said. “My gut feeling is that I want to get it over with and get out of here.”

Early in the crisis TEPCO ran out of full radiation suits, forcing workers to create improvised versions of items such as nylon booties they were supposed to pull over their shoes.

TEPCO has since acknowledged the problem and promised more detection devices for their workers, but underscored that the conditions for them are extremely trying.

“They sleep on the floor, inside a conference room, or even in the hallway or in front of a bathroom,” said Kazuma Yokota, head of the Fukushima local office of NISA. “That’s where they sleep, with only one blanket each to wrap themselves around.”

Another worker who spoke anonymously to the daily Mainichi newspaper in Japan said that when he was summoned to help rescue work at Fukushima Daiichi, he did not tell his family to spare them worry. But he did tell a friend to notify his family if he did not return within two weeks.

“I feel very strongly that there is nobody but us to do this job, and we cannot go home until we finish the work,” he told the newspaper.