AMSTERDAM – A second explosion at the 40-year-old Fukushima Daiichi nuclear power plant in Japan, this one at the plutonium-based fuel No. 3 reactor, has been reported and 11 have been injured – one critically – in the blast caused by a hydrogen build-up similar to the explosion that rocked the plant’s No. 1 reactor building on Saturday. 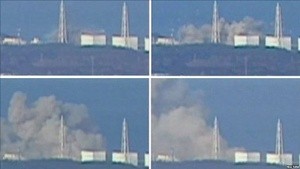 The explosion at the plant, which is about 240 kilometers from Tokyo, blew away the roof and walls of the building housing the reactor, Japan’s Kyodo News reported.

“The explosion is expected to be the same hydrogen explosion which occurred on reactor Unit 1,” Chief Cabinet Secretary Yukio Edano told reporters.

“The report from TEPCO is that the drywell (core) is not damaged. We are measuring the radioactivity at site to confirm the status of the damage,” he said. Yet he did acknowledge to western media that there was a “remote” possibility of a major spread of radiation.

Seven workers from Japan’s Self-Defense Forces, which are experiencing their biggest mobilization since World War II, were missing after the blast.

No rise in radiation levels has officially been reported, though by all but official Japanese accounts, it is far too early to confirm that assertion.

No 2 reactor could be headed for explosion as well

The Japanese nuclear safety agency also reported that it had lost the coolant system of the reactor No. 2 at the plant, piling more worry onto an already far out of control situation.

As of late evening Japanese time it was reported that the No. 2 reactor, which had been receiving injections of saltwater to cool its core, had run dry. The pump that had been pumping the sea water into the reactor’s core ran out of fuel, an ex-government official in Japan who spoke with Bellona Web on the condition of anonymity said, and there was no replacement pump or additional fuel on hand.

The water flow has been restored, the ex-government official quoted Japanese media as reporting, along with the reassurance that should the water be replaced “in time,” experts predict that no problems will result.

Bellona nuclear physicist Nils Bøhmer said he suspects yet a third hydrogen build up and another possible explosion at that reactor.

Monitoring devices at that site have shown no decrease in pressure despite efforts of emergency workers, said Bøhmer. Japanese officials said they would be venting the reactors, which will involve a release of radiation, a tactic that had previously been tried on Fukushima Daiichi’s No. 2 and No. 3 reactors.

Reactor No. 3, whose building exploded at 11:01 a.m Japanese time, is one of the reactors into which emergency workers had been pumping seawater to avert a meltdown. Injections of seawater and boron at  reactor No. 1 had begun on Saturday, and on Sunday workers began the same tactic at Reactor 3.

The ex-government official told Bellona Web that the first reports he had heard about Unit 3 burning MOX fuel had come from Bellona Web, which had confirmed this with the Russian environmental organization Ecodefence. The ex-official said there had been no news of this fact reported in Japanese media.

The reactor has been burning MOX fuel since September, Ecodedence said.

The new explosion has several characteristics that differed from the first at unit 1 on Saturday, which was characterized by mostly white smoke.

Today’s was much higher than the original explosion and television images showed dark gray smoke and debris flying into the air. Red fire was also seen in the footage, according to those who watched it, which the ex-government official said had not been present in footage of the first explosion on Saturday. Experts will not speculate at the moment as to what the differing explosion patterns mean.

The Japanese government issued an order for all who remained within the 20 kilometre radius to remain indoors, shut their windows and line them with wet towels. But advice for the rest of the country is not forthcoming.

“The government is not providing any nuclear related precautions to the citizens other than to the people who are in the 20 kilometre radius to leave the area asap, and to put on a mask, long sleeve shirt, hat,” said the ex-government official in an email interview with Bellona Web.

“People here in Tokyo are not taking any nuclear related precautions, mostly because we think we are far enough away.  I did not go to office today because I did not want to leave my family,” he wrote.  “There is still many aftershocks here in Tokyo.  But I saw on a news program that many people went to thier offices and now, some are having a hard time coming back home because the main transportation, the train, has stopped due to saving power.”

According to Japanese media, Tokyo will today being a period of rolling black outs as a result of country-wide power shortages that coould last into April. The ex-government official said that his neighborhood will have no power for six hours a day. Trains are not running during black out periods, stranding millions of commuters.

The ex-government official said that Japanese officials had reported that the integrity of the reactor chamber housing the core at reactor No. 3 remained intact after the new explosion, but said  officials had issued that conclusion “very quickly.”

He added that an announcement that radiation levels had not increased had come rapidly on the heels of the first television footage of the explosion.

According to Japan’s nuclear safety service, radiation levels remained at 20 microsieverts near the entrance of unit three. But there were no comparison figures given because there are no other monitors for unit 3, said the Japanese nuclear safety agency.

This figure strongly varies with other earlier reports of 1,204 microsiverts that were measured outside the plant on Saturday, and leaves room for doubt.

Tokyo Electric Power Co (TEPCO) reported that radiation measurements remained high. According to a report issued by Kyodo News, TEPCO said radiation levels around the plant were around 751 microsieverts and 650 microsieverts Monday. A microsievert is an internationally recognized unit measuring radiation dosage, with people typically exposed during an entire year to a total of about 1,000 microsieverts.

TEPCO reported some 30 minutes after the blast that 1,800 millimeters of the fuel elements within reactor No. 3 were exposed above their coolant, though TEPCO failed to say they are MOX fuel elements.

Conclusive information hard to come by

“One can’t really speculate on what is actually happening at reactor 3 because there is very little concrete information being released,” said Bøhmer.

“In many ways, getting information on nuclear accidents in Japan is as difficult as it is to get in Russia. Either the Japanese don’t know or are trying to hide something,” he said. “To get the answer, you need to ask the right question, and that’s hard to determine in a situation like this.”

“Many TV commentators – university professors, experts from the industry – mention, that the information given by the government is not enough, comes too late and speculation is on the rise that they are hiding the truth,” he wrote Bellona Web in an email.

Indeed, the ex-government official told Bellona Web, that while the share of broadcasting time that is being devoted to reporting on the situations of Japan’s ailing nuclear reactors is dominating the airwaves, very little concrete information about radiation levels and what may happen is included in that coverage.

He asked that Bellona and other organizations come to Japan to independently monitor the radiation situation on the ground.

At the moment, some of the only independent radiation monitoring is coming from the US military, which has been helping the relief effort.

US vessels moved further away from shore after the second blast, and said one of their aircraft carriers detected low level radiation about 160 kilometres from shore.

Bøhmer said, however, that those readings were likely coming from Saturday’s explosion, as the radiation takes some time to travel. Radiation, if any, from an explosion that occurred today would be prone to drift inland with the prevailing winds, which are to the northwest today, said Bøhmer and Japanese television, and there have been no inland reports issued thus far. The US flotilla is located to the west of the explosion.

One of the aircraft carriers in the flotilla, the Ronald Regan, had, according to US media, sailed today through a radioactive cloud that had formed as a result of the explosion at reactor No. 1 on Satuday. American officials say that the crew received a dose of radiation that a person would receive over the course of a month in one hour.

That the reactor core remains intact at No. 3 is crucial. Since September, this reactor has been burning uranium and plutonium mixed oxide, or MOX, fuel. Contamination from this unit could therefor lead to plutonium fallout, which would greatly complicate an already tangled situation.

“A shutdown of coolant to a reactor loaded with MOX fuel makes the reactor much more difficult to control than a reactor loaded with usual uranium fuel,” wrote Vladimir Slivyak, co-chair of Russia’s Ecodefence, in his regular updates on anti-atom.ru, noting that a disaster at the No. 3 unit would lead to plutonium fallout.

“Compared to radioactive fallout from a reactor working on uranium fuel, a much higher rate of illness can be expected as a result of [plutonium] irradiation,” wrote Slivyak.

“The worst case scenario would be to lose all ability to cool the core which would expose the fuel assembly to the air,” he said. The temperature would rise dramatically”.

Should temperatures reach 1100 degrees Celsius, Bøhmer said, any cooling water begins to disappear and hydrogen beings to be produced.

At 2200 degrees Celsius, the uranium in the MOX fuel assembly would begin to melt.

This makes the exposed 1,800 milimeters of MOX fuel reported by TEPCO all the more urgent.