Workers at the crippled Fukushima Daiichi nuclear plant took a step toward reining in its overheating reactors when they installed to cables to restore electricity to some cooling systems which, coupled with earlier efforts to lower temperatures with seawater, seemed to have an effect. 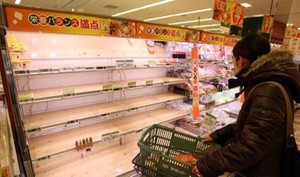 But optimism was quickly dampened by reports that the food contamination crisis that emerged on Saturday was spreading radiation not only via milk and spinach from the Fukushima and Ibaraki prefectures, but in the drinking water supplies of Tokyo, 240 kilometres south of the plant, and other areas. Radiation has also begun to turn up in rain.

Although Japanese Japan’s health Ministry said – as has become the norm – that the contamination levels were not immediately harmful to human health, it nonetheless, on the urging of the International Atomic Energy Agency (IAEA), suspended food exports from the Fukushima prefecture.

Early Sunday, concerned Tokyo residents packed central markets to stock up on milk, which has been in short supply  after milk carton factories were destroyed by the quake and tsunami, the Los Angeles Times reported.

“The government keeps urging people to stay calm, but there’s a sense of growing anxiety,” said Hiroaki Nakajima, an employee at the Kimuraya supermarket, according to the paper.

Even before news of the tainted foods, he said, people were hoarding things that they wouldn’t normally buy, like instant noodles, water and rice. Now, he said, customers ask where the milk and spinach come from, the paper reported.

Radioactive contamination from the Fukushima Daiichi plant, whose cooling systems were knocked out by a 9.0 scale earthquake and at 10-metre tsunami nine days ago, have led to higher than normal readings of in spinach and milk and traces of radioactive iodine in tap water in Tokyo and elsewhere, and in some cases caesium contamination as well.

Traces of radioactive iodine have also been registered in drinking water pipes in the prefectures of Totogi, Gumma, Niggata, Tiba and Saitama. Additionally, water samples from Totogi and Gumma, which neighbor the Fukushima prefecture, have shown evidence of caesium contamination, said the Russian environmental organization Ecodefence in its news blog on the crisis.

Rain contaminated with radioactive iodine and caesium also has been reported in those prefectures as well, the Kyodo News agency reported.

Should radioactive particles be ingested by people, internal organs are exposed to radiation poisoning that could lead to cancer, said Ecodefence.

The Kyodo news agency reported that the contamination turning up in Tokyo and other’s water supplies is from Fukushima Daiichi.

The connection by Tokyo Electric Power Co (TEPCO) of electricity to reactor Nos 5 and 6, thought to be the least damaged of the plant’s six units, has brought about a cooling of those reactors, said the company Sunday. But there is no way any of the effected reactors will ever be used to generate power again, said Bellona physicist Nils Bøhmer.

“The reactors at the Fukushima plant are history,” he said. He speculated that they would all eventually be buried in concrete, like Chernobyl.

TEPCO said it was hopeful that two more electric cables – stretching 1.5 kilometres from a power grid owned by the Tohoku Electric Power Co – would be connected to reactor Nos 1 and 2 by the end of Sunday. The first electricity cable was hooked up to reactor No 1 on Friday, but technicians have been held up by systems checks before turning on power.

It remained in question whether the pumping of electricity into these to units, both of which suffered hydrogen explosions early in the crisis as a result of built-up steam in their overheated, coolant drained cores, would have any benefit.

“I don’t think it is a sure thing at all. All the reactors were exposed to shock, so who knows if the piping is still intact?” Edwin Lyman of the Union of Concerned Scientists in Washington, which has been watching the crisis closely, told the Los Angeles Times.

Lyman and other experts nonetheless took the restoration of power as an optimistic sign. It “is absolutely a turning point” in the battle to cool the reactors, USC nuclear physicist Najmedin Meshkati told the paper.

In one potentially hopeful development, officials said they planned to test high voltage power lines as early as Sunday afternoon that would restore operations to cooling equipment at damaged reactors Nos. 1 and 2, were, said Ecodefence, partial fuel melts may already have occulted.

None of the nuclear experts were surprised by the food has been contaminated. After the Chernobyl nuclear power plant disaster in 1986, a major cause of the thyroid disease suffered by children came from consumption of tainted foods.

Japanese health officials, in a refrain that has become all too familiar among the frustrated and confused Japanese public, said that the amounts of radiation detected were negligible. The amount of radiation found in the milk, if consumed for a year, is equivalent to levels found in one CT scan, Reuters reported.

But experts confirmed that radiation and food and water supplies were cause for concern. Dr. Glenn D. Braunstein of Cedars-Sinai Medical Center in Los Angeles said that even the levels of radiation announced by Japanese health authorities could be harmful to children.

“Children are growing and their organs are growing, so they’re very susceptible to radiation effects,” he said. “They really need to discard the milk from around the reactor disaster,” he told the Los Angeles Times.

Dr. Daniel Zurosky, director of radiation safety at the University of South Carolina School of Medicine, told the Associated Press that contamination could also turn up in fish – a staple of the Japanese diet – from radioactive material that has entered the water, become part of the food chain and is consumed by fish.

He urged Japanese officials to monitor food, noting that after Chenobyl, Soviet authorities had not been forthcoming about the dangers of radioactive fallout that spread throughout the areas farmlands.

Despite admissions from Japanese Chief Cabinet Cabinet Secretary Yukio Edano on Friday that the government could have been “a little quicker in assessing the situation and coordinating all that information and provided it faster,” and stiff assurances from Prime Minister Naoto Kan that he had given the public all the information he had, suspicion that the authorities are still holding back is widespread.

The announcement of the food contamination crisis only heightened that feeling among those interviewed by the Los Angeles Times in Tokyo food lines.

“The biggest problem is that we’re not getting the whole picture from the government, from the media,” said 76-year-old Takamasa Edogawa. We generally know where the spinach and milk were from. But we don’t know exactly where. And if the wind changes, other areas could be affected by radiation.”