Iran said Saturday it will have to remove fuel from the controversial nuclear reactor that Russia’s state nuclear corporation Rosatom has been building in the southern port town of Bushehr over some 15 years, signaling that the reactor poses a direct threat of a major accident, press reports and environmentalists have said.

Published on February 26, 2011 by Charles Digges 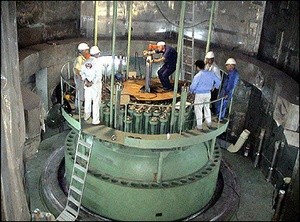 The decision to remove the fuel from the $10 billion, 1000 megawatt reactor comes just months before the facility, whose construction has been a political and logistical gauntlet since the 1975, was scheduled to come online and provide power.

“Based on the recommendation of Russia, which is in charge of completing the Bushehr atomic power plant, the fuel inside the reactor core will be taken out for a while to conduct some experiments and technical work,” Iran’s envoy to the UN atomic watchdog, Ali Asghar Soltanieh, told Iran’s state ISNA news agency.

Iran had started loading the fuel into the reactor in October after the “physical launch” of the plant by Moscow on August 21.

Saturday’s decision to remove the fuel is the latest setback in the three-decade history of the Bushehr reactor, which was begun under the US-backed Shah by Germany’s Siemens. Germany abandoned the project in 1979 during the Iran’s Islamic Revolution.

Russia took over the Bushehr project to international outcry in 1994, agreeing to supply fuel and provide construction. In 1995, a deal was signed between Moscow and Teheran. As the fuel supplier, Russia said it would be taking the reactor’s spent fuel back for reprocessing, but Iran has been more vague about what it plans to do with the spent nuclear fuel, which has often put the two countries at loggerheads.

At one point, Russia even said it would buy back its own spent fuel.

Yet despite the ambiguity of the agreements, Rosatom has posed the Bushehr plant as a hallmark of its international reactor-building prowess.

Some 2,000 Russian nuclear technicians have been on site since the reactor build resumed.

But for all the pride that Russia takes in its international builds – and the money its boasts they will bring – the country’s nuclear industry constantly gives the short shrift to issues of safety, said the Vladimir Slivyak co-chair of the Russian environmental group Ecodefense.

“The low quality at the manufacturing level of equipment for nuclear power plants, corruption in equipment purchases and services are an open secret,” said Slivyak. “All it takes is one big accident in Russia or any other country where Russian specialists are working and you can forget about the profits forever.”

What’s wrong with the fuel?

According to one source, who spoke anonymously, the fuel is being unloaded because engineers suspect it may have been contaminated by metal particles from the 30-year-old equipment that comprises much of the reactor, Reuters reported.

“We’re talking about particles of about 3 millimeters in size,” said the source.

“Some of the equipment used in the construction has been sitting around for 30 years. The fuel has to be unloaded and examined to make sure no metal particles have gotten into it,” he said, adding that unloading the fuel would take about six days.

Slivyak said that even if the technical problems were left behind by Siemens “it is testament to the incompetence of Russian specialists who should have been able to determine if the equipment fabricated more than 30 years ago was suitable.”

Slivyak also asserted that it was possible that faulty Russian equipment could just as easily be to blame, as that equipment was manufactured over 10 years ago.

“Even relative to contemporary equipment delivered by Russia, defects on the issue of quality can arise, as was the case with the [Russian] construction of the Tianwan plant in China,” said Ecodefence. Tianwan, China’s largest nuclear power plant, which was built by Atomstroyexport, Rosatom’s foreign construction wing, had to delay its opening because some 3300 defects in materials and construction by Russian specialists were found.

“If such problems arise at foreign construction sites, where control is higher, then it’s frightening to think of what happens at nuclear power plant construction site in Russia,” said Slivyak.

Delay’s at Bushehr an expected embarrassment

Iran’s revolution, followed by an 8-year-war with Iraq were just the first delays for Bushehr. Siemens turned Iran away when in the late 1980’s it asked the German engineering giant to finish the plant before Russia offered its services.

Even then Atomstroyexport accused Iran of falling behind on its payments, and threatened to pull out of the project. This was largely believed by analysts to be subterfuge as Iran’s other nuclear ambitions metastasized to the chagrin of the international community.

Indeed, like most other Russian nuclear projects abroad, Bushehr has largely been constructed on deferred credits from Rosatom – meaning defaults will be transferred to Russian taxpayers.

Last year on August 21, however, Moscow declared the “physical launch” of the plant. Even then, delays kept pushing the actual launch back, delays that officials blamed, among other things, on Bushehr’s “harsh weather.”

Arguments about the most recent setback necessitating the fuel removal will most likely centre around whether the original engineers from Siemens are to blame – and Rosatom will try its best to spin it that way.

But in the event of a serious accident, said Slivyak, that would be a moot point.

“If the Bushehr NPP has, for example, a radiation leak, no one will bother to grapple with whether it was German or Russian equipment,” that caused it, said Slivyak.