IAEA makes vague allegations that Russian may be aiding completion of an Iranian nuclear weapon: Paper

International nuclear inspectors are investigating whether a Russian scientist helped Iran conduct complex experiments on how to detonate a nuclear weapon, according to European and American officials, the New York Times reported.

Published on October 10, 2008 by Charles Digges 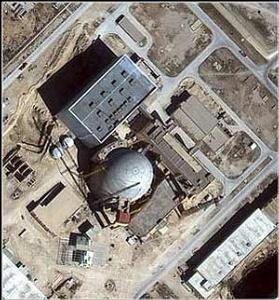 If true, the revelations would confirm some of the West’s longest held fears about post-Soviet Russia that a disgruntled rogue nuclear scientist could pass on critical weapons secrets for personal gain in the midst of collapsing salaries for scientific workers in the former Soviet Union.

Yet, the authenticity of documents under investigation by the Agency, which they say tie a Russian scientist to Iranian nuclear weapons efforts, remains vague.

IAEA officials refuse to disclose both the details of the circumstances under which the documents were obtained, and will not explain how it is that they can conjecture that the document is, in fact, authentic.

The IAEA apparently made reference to the suspected presence of foreign information within its reviews of Iran’s nuclear programme months ago.

In February, in a closed-door briefing at the Agency’s headquarters in Vienna, its chief nuclear inspector, Olli Heinonen, presented diplomats from dozens of countries with newly declassified evidence — documents, sketches and even a video — that he said raised questions about whether Iran had tried to design a weapon, the paper said.

When the Iranian envoy at the briefing called the charges "groundless" and protested that the tests were for conventional arms, Heinonen replied that the experiments were "not consistent with any application other than the development of a nuclear weapon," two participants in the closed door meeting told the paper.

Heinonen himself, however, has said that the agency “did not have sufficient information at this stage to conclude whether the allegations are groundless or the data fabricated."

The new document under investigation offers further evidence of such experiments, the Western officials told the New York Times.

As part of the investigation, inspectors at the IAEA are seeking information from the scientist, who they will not name, but whom they believe acted on his own as an adviser on experiments described in a lengthy document obtained by the agency, the officials said.

Agency officials, who spoke anonymously with the newspaper, said that the document appeared authentic – without explaining why – but they made it clear that they did not think the scientist was working on behalf of the Russian government.

Further requests for information about the document’s authenticity by Bellona Web were similarly left unexplained, but a spokesman did confirm that they were questioning “a Russian with weapons knowledge.”

It is the first time that the nuclear agency has suggested that Iran may have received help from a foreign weapons scientist in developing nuclear arms. The document is said by Heinonen to contain descriptions of the shape and timing involved in the firing systems and detonators “key components of nuclear weapons.”

But the possible influence of a foreign source, most likely Russian, has been vaguely discussed in IAEA meetings for several months, though nothing has been done as the Agency said it did not have enough information to move on the allegations.

Apparently, it still does not. The documents were obtained under circumstances that could make them ineligible for further action, the New York Time said.

These circumstances put Agency chief Mohamed ElBaradei in an awkward position, who has been working with Iran to obtain full data on its past nuclear activity.

"I cannot accuse a person without providing him or her with the evidence," ElBaradei said last year.

Tehran has protested that the document is a forgery. The IAEA has furthermore only presented Iran with a translation of a 5-page document from English into Farsi, where the document under investigation by IAEA officials is several hundred pages in Farsi.

This Farsi document is described by officials familiar with it as a detailed narrative of experiments aimed at creating a perfectly timed implosion of nuclear material, the paper said.

According to experts, the most difficult challenges in developing nuclear weapons are creating the bomb fuel and figuring out how to compress and detonate it.

IAEA officials who spoke with the New York times said that the scientist in question was believed to have helped guide Iranians in the experiments, but that he did not write the document currently under study by IAEA officials.

Nor is he thought to have been affiliated with the civilian electric power plant that is being rebuilt by Russia at the Iranian port of Bushehr, and which Russia has agreed to fuel with nuclear material, the officials said.

Russia says it opposes any effort by Iran to obtain a weapon, but cooperation by Russian companies and individuals with some aspects of Iran’s nuclear programme dates back years.

In the late 1990s, Russia’s scientific and technical elite, reeling from the collapse of the Soviet Union, forged ties to Iran, which paid hard currency for aid in weapons and technical programs. Western experts say the help extended to Tehran’s atomic efforts, but there was never any proof in those years of a Russian link to nuclear weapons development, said the paper.

“The Iranians were very active in recruiting and paying Russian scientists to provide them with assistance in their nuclear programme,” Gary Samore, a National Security Council official during the Clinton administration who now directs studies at the Council on Foreign Relations, told the New York Times.

He said he had no recollection of Russian aid in the design of Iranian nuclear arms but added that it could have happened. “It’s plausible to me that they at some point paid a Russian nuclear expert to provide assistance,” the paper quoted him as saying.

Asked about the potential contribution of the Russian scientist in detonator experimentation, a senior Russian official who has long followed Iran’s nuclear programme told the New York Times, “It is difficult for me to add anything.”