NEW YORK – With the delivery of 80 tons of Russian made fuel to the Bushehr reactor on the Persian Gulf in Iran – which has been a lighting rod for policy disputes between Moscow and the west – both countries announced further plans to build yet a second nuclear power plant in the Islamic Republic’s southern province of Kuzistan.

Published on December 19, 2007 by Charles Digges 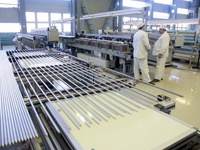 Russian Foreign Minister Sergei Lavrov further announced on Tuesday, following the announcement of the Russia uranium fuel from Russia’s nuclear fuel monopoly TVEL Iran – that Moscow would be helping yet another pariah state to the west develop its nuclear energy – Libya.

With the recent consolidation of all of Russia’s nuclear related industries under the state corporation of Atomenergoprom, nuclear reactor and fuel export will gain importance as big time money spinners for the newly formed corporate nuclear behemoth.

The fuel shipment, which arrived in Tehran Monday after countless delays due to high-pressure diplomacy from the west, showed vividly that Moscow is the clear powerbroker of nuclear energy in the Middle East and its fertile reactor market. Tehran announced Monday that it would build a second reactor in southwest Iran’s Darkovin – an area better known for oil fields.

Both Bushehr and Darkhovin were projects planned before the 1979 revolution, and then abandoned. It was not clear how much construction had been carried out at Darkhovin.

The Darkovin plans, which Russia’s foreign ministry said in an interview it plans to “assist” with – though Tehran is shooting to at least run the reactor on indigenously enriched uranium.

Bushehr could go online in just over six months
Last week, Sergei Shmatko, the director of Atomstroyexport, the Russian contractor responsible for the plant, announced that Russia and Iran had ended their financial disputes over the project, although he did not indicate a date for when the long-awaited opening would occur.

Irina Yesipova, a spokeswoman for Atomstroyexport, told Bellona Web that Bushehr would be ready technically to operate no sooner than six months after all the uranium fuel rods needed to power the station were delivered.

Russia promised earlier in the decade to help Iran build as many as five nuclear reactors. It counts among its other reactor clients China and India, and is developing several floating nuclear power plants both for Russia’s Arctic coast and several southeast Asian nations.

Fuel deliver no surprise after US intelligence report
The delivery of the fuel has come as no surprise as many western nations have begun to soften their stance against Iran in the wake of a US Intelligence report released two weeks ago that indicated Tehran gave up its nuclear weapons ambitions in 2003 and has not resumed them since.

The appearance of the report has also emboldened nuclear salesmen across Europe who have been viewing the Middle East as untapped territory for export of their nuclear technology, regardless of any perceived or real risk this or that state may pose to Western security.

Russia’s decision to deliver fuel to Bushehr further encourages Iran, several administration officials and European diplomats said privately. They did not speak for attribution because they had not been authorized to discuss the matter publicly.

Couching their sales pitch in terms of cutting down on carbon emissions, companies like Areva, Urenco and Rosatom have on the one hand touted the technology as “green” while on the other encouraged the Middle Eastern nuclear drive to free up carbon producing crude oil exports, said the diplomats.

The big nuclear companies have also failed to present any kind of plan for storing nuclear waste produced in the Middle East. Russia, with staggering spent nuclear fuel problems of its own, will actually be buying Iran’s spent fuel back as a non-proliferation courtesy.

Mid East nukes keep US addicted to oil
The Darkovin reactor plans announced earlier this week are in an area north of Bushehr better known for oil fields But this is very much the point one Russian foreign ministry official told Bellona Web in a telephone interview Wednesday.

“The Iranian nuclear programme is to provide power at home while continuing to sell oil to an oil dependent west,” said the official who spoke anonymously as he is not authorized to speak on the programme.

“With America, especially, it is clear that cars will not be going away soon, even as the world focuses attention on climate change – but we saw how serious America is about that at Bali,” he said in reference to US participation in the Climate Change Summit in Bali, Indonesia earlier this month, were the US delegation insisted on vague emissions cuts in the summit’s final documents.

Russia jockeys to be a big nuke peddler
Joining the French in their zeal to put the former terrorist-branded state on the nuclear electricity grid, Foreign Minister Lavrov said in Moscow that Russia is “ready to help” Tripoli develop civilian nuclear energy.

Kamynin said Lavrov would visit Libya on December 23 and 24.