NEW YORK – Russian President Vladimir Putin left Iran overnight Wednesday after a trip which saw him reinforce ties with the Islamic republic and distance himself from Western warnings over its nuclear programme by endorsing Iran’s ambitions as “peaceful’ and saying there was no evidence to back western claims Tehran is pursuing the bomb.

Published on October 17, 2007 by Charles Digges 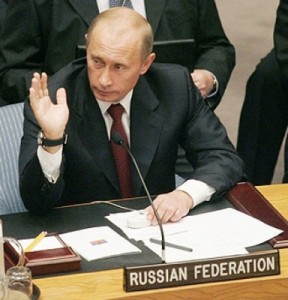 Putin attended a summit of Caspian Sea states and held talks with top Iranian leaders in the first visit by a Kremlin chief since Joseph Stalin’s 1943 visit during World War II in a boost for Iran at a time of increasing Western pressure.

His trip was marked by heavy security following a report a squad of suicide bombers planned to kill him and even his departure time was kept closely under wraps by Russian and Iranian officials, according to diplomats.

He warned the West not to launch an attack over the Iranian nuclear programme, insisted Iran’s Russian-built first nuclear power plant would be finished on a new revised schedule that will bring it online by 2008. Russia has accused Iran of falling behind on payments to Atomstroiexport, Russia’s overseas reactor-building monopoly, which has delayed the reactor’s launch from its originally scheduled date of December 2007.

Putin says nuke power in Iran a-okay
Putin backed Iran’s essential right to nuclear power and assured Iranian leaders that be believed their intentions to be peaceful, despite howls of disagreement from the West.

“The Iranians are co-operating with Russian nuclear agencies and
the main objectives are peaceful objectives,” he said, according to news agencies.

A joint statement issued by the Iranian presidency emphasised "the closeness of Russian and Iranian positions over the key world questions and the development of cooperation to establish a world order that is more just."

The statement was a clear shot at the United States, which is widely seen by Russian and a majority of counties around the world that view the policies of the Bush administration as militaristic and hegemonic.

At the same time the United States does have allies like France who accuse Iran of seeking nuclear weapons and want to impose more UN and unilateral sanctions.

How tough is Putin?
The Kremlin was anxious to play up Putin’s trip both as a defiance of western pressures and a death-defying dare in the face of rumors promulgated fiercely in the Russian press of a plot to assassinate him while in Tehran. Yet there was little to suggest from the Iranian side that Putin – now clearly a major ally of Russia and its nuclear pursuit was ever in any danger.

According to Andrei Pionkovsky, a Russia analyst with the Hudson Institute, in Washington, DC, the Russian secret services “organise a so-called assassination attempt two to three times a year.”

On an international stage, Putin’s visit to Iran, complete with his own personal armored limousine, serves to reassert Russia’s great-power status, and Iran serves a dual role for Putin in that capacity: Russia’s nuclear dealings with Iran are profitable, and the Iranian nuclear problem conveniently preoccupies the United States.

But despite his strong man image, Putin is known more for his purr than his growl in Tehran. He was there to do business, and he smoothed over the payment problems that Russia alleges Tehran was having. Tehran has consistently denied it is behind in its bills. Furthermore, Moscow has signaled its eagerness to build more reactors for Iran, saying in 2003 that it would pursue contracts for at least five more, and has not since contradicted that offer.

Iranian press throws Putin visit in West’s face
Unsurprisingly, Iran’s hard-line press was keen to play up the significance of Putin’s visit as a sign of the differences between Russia and other world powers.

"Maybe the most important result of Putin’s trip is to show the independence of Russia towards America and the West," said Kayhan, the mouthpiece of Iran’s clerical authorities, Agency France Presse reported.

"The Russian statements showed a deep difference of opinion between Russia on one side and America and France on the other side in dealing with Iran’s nuclear case," added the hardline Jomhouri Islami.

Ahmadinejad and Putin, in their joint statement, emphasised "the necessity of solving as quickly as possible the situation over the Iranian nuclear programme through politics and diplomacy," IRNA Iranian news agency reported.