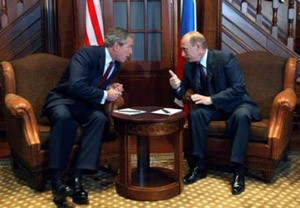 But, while defending the plans for the plant, which are vociferously reviled by Washington, Putin was nonetheless adding his voice to the remaining members of the Group of Eight industrialized nations, or G-8, who this weekend held a summit in Evian, France, and issued a statement describing weapons of mass destruction as the preeminent threat to international security.


Iran, in particular, is confirmed by the IAEA to have a uranium enrichment site and a heavy water facility &#151 which is necessary for the production of plutonium. Iran has also started mining its own uranium, which gives it a practically indigenous capability to produce nuclear fuel or weapons. All of this has raised international fears that Tehran is pursuing nuclear weapons.


Two more as-yet-unconfirmed uranium enrichment sites in Iran were alleged to exist by the National Council for the Resistance of Iran &#151 an umbrella group for Iranian opposition organizations &#151 said the groups spokesman Ali Savafi last week. Savafi said the group would reveal evidence proving the existence of these sites in coming days.

The international community has been steadily applying pressure on Iran to submit to tougher control by the IAEA. Even Russia, Irans biggest cheerleader in the area of nuclear power development has lately &#151 to the embarrassment of Russian Minister of Atomic Energy Alexander Rumyantsev &#151 backtracked on its repeated statements that Iran has no nuclear weapons capability.


But at a news conference in Tehran on Tuesday, the Iranian foreign ministry spokesman, Hamid Reza Asefi, repeated Irans position on the issue of its nuclear program, the BBC reported.


Asefi said Iran would not sign any new protocols until international sanctions imposed on the Islamic Republic are lifted and Iran is given the technology for peaceful atomic energy it says it should be allowed under the 1973 Nuclear Non-Proliferation Treaty, or NPT, of which it is a signatory.


The new protocol that is at issue for Iran and the G-8 is the IAEAs so-called Additional Protocol, which allows for more intrusive inspections on much shorter notice. Iran has resisted this &#151 even though the protocol has 31 other signatory nations, including Canada. The protocol initiative was suggested following the IAEAs February visit to the Iranian city of Natanz, where investigators examined several hundred hexafluoride gas uranium enrichment centrifuges, and the equipment to build as many as 5000 more &#151 enough to produce at least two nuclear bombs a year.


G-8 leaders insisted at the summit that the IAEA protocol would give Iran the opportunity to prove that its program is indeed peaceful. On June 16 and 17, Mohamed ElBaradei, the IAEAs chief, will deliver a report on the status of Irans nuclear program to the IAEAs board of directors &#151 after which point, depending on the analysis of the February inspections findings, international pressure on Tehran may mount.


Putin Contemplating an Ultimatum to Iran?

Although Putins statement at the Evian Summit was expected to reveal a confluence of opinion with the United States on the issue of Irans nuclear program &#151 which Tehran and, until recently, Moscow, have insisted is for peaceful purposes &#151 it was a remarkably softened version of what he purportedly said earlier, according to a BBC report on Monday.


In that broadcast, Putin was quoted by an unnamed British official as telling other G-8 leaders that Russia would halt all nuclear exports to Iran until Tehran agreed to a stricter IAEA inspection regime. But such a plan would be complicated to implement, given that the first shipments of Russian uranium fuel have already arrived at Bushehr.


Neither the Russian Ministry of Foreign Affairs nor the British Foreign Office would comment on this BBC report Tuesday, and the Iranian foreign and nuclear ministries had heard nothing of Putins reported ultimatum, spokesmen for these government organizations told Bellona Web.

While speaking in Tehran on Tuesday, Asefi went on the counter-offensive, challenging the Americans to join in and help build Irans nuclear power stations, if they really are so concerned about Iranian intentions. That idea had already been suggested by Russias nuclear minister Rumyantsev earlier this month.


But the offer was shot down immediately by American officials. They said no country should be helping Iran in this field, according to the BBC.


Putin, however, steadfastly refused to abandon the $800m, 1000-megawatt Bushehr light water reactor that Russia has been constructing since 1986. It was initially expected to come online later this year, but in an apparent concession to the United States, the Russian atomic ministry announced that it would open in 2005. The U.S. insists this site is a covert funnel for Iran to obtain more sensitive nuclear information &#151 a claim both Moscow and Tehran deny. The new opening date for Bushehr could be construed as an effort to give the IAEA more time to inspect Irans other nuclear installations.


Alexander Yakovenko, spokesman for the Russian foreign ministry, said conflicts about Irans nuclear program must be solved on an international level, according to a transcript of a briefing he gave in Moscow earlier this week.


This is a major challenge confronting the international community in view of a likely upsurge of terrorism following the recent developments in Iraq. At the same time, we believe that this problem is to be dealt with on a fully legitimate basis without assigning the arbitrary rogue state status to any individual countries, said Yakovenko.

Yakovenko added that any attempts to oppose weapons of mass destruction proliferation by force or by a threat of force would only provoke acceleration of nuclear arms race and further regionalization of the problem.


Such is our position on this issue and we are going to stand by it when discussing problems relating to Iran and North Korea, he said.

According to the IAEA, Washington and international groups, Bushehr may be the least of current worries about Iran &#151 compared to the other two known nuclear facilities that could present a far greater non-proliferation risk. The Natanz facility, as confirmed by the IAEA inspection, has cement walls at least a meter thick, and is built partially underground in an apparent effort to thwart a military attack. Another site near Arak, which was also visited by the IAEA, will produce heavy water, which would be instrumental in the production of plutonium.


The initial allegations that these sites existed emerged in December last year from the same National Council for the Resistance of Iran &#151 which includes as one of its members an organization known as the Peoples Mujahedin, a group listed as a terrorist group in both the European Union and the United States. The United States, however, recently signed a cease-fire with members of the group operating in Iraq, the U.S. State Department said.


Last week, based on information supplied by the Peoples Muhajedin, the National Council for the Resistance accused Tehran of having two more uranium enrichment sites that it has not declared to the IAEA, essentially making them secret installations.

A senior U.S. administration official, who requested his name not be mentioned, attributed Putins change of stance over the Iran issue to a meeting of the minds between the Russian president and his American counterpart George Bush.


Some of it undoubtedly has to do with what the IAEA found when they went into Iran, where they found [] a more developed nuclear capability than anybody had seen heretofore [] And its getting peoples attention, he said.


The official noted that the U.S. and Russia had been having fruitful conversations on Irans nuclear capabilities for about two years now.


I think what the Russians want is not to be disadvantaged themselves, in terms of civilian cooperation, this official said. He added that if Iran were to allow closer inspections so that the world would be clear about Tehrans intentions, the international heat would be turned down about Irans possible weapons program.