EU, Russia and US Urge Iran to Sign Inspection Protocol

With Iran facing growing pressure to be more open about its nuclear programme, the United Nations top nuclear weapons inspector, the Russian foreign minister and a group of European Union ministers earlier this week urged the Islamic Republic to sign a protocol that would give inspectors the right to conduct more intrusive examinations of its facilities. 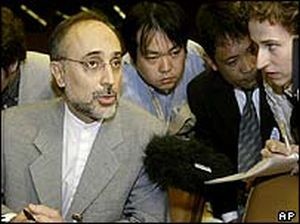 The call came after the governing board of the International Atomic Energy Agency, or IAEA, which is meeting this week in Vienna, formally reviewed a recent report on the Iranian issue that was widely leaked to the media last week. This report gave new details about Irans wide-ranging experimentation with uranium hexafluoride gas enrichment centrifuges and also revealed the countrys plans to build a 40-megawatt heavy water research reactor. Both the uranium and plutonium projects could be used in the production of nuclear weapons.

In interviews with Bellona Web, US officials said they are pushing for a vote to censure Iran at the IAEA meeting of the board of governors, which began on Monday. If that fails to produce results, they said, the next step could be for the board to refer the dispute to the UN Security Council, possibly in the autumn.

The Bush administration says Iran is using its Russian-supported civilian nuclear programme as a cover for secretly developing nuclear weapons, an assertion denied by Tehran. Moscow, too, has until recently denied that Iran has the capability to build nuclear weapons, but, in light of recent discoveries, backed off its defence of Tehran. It has, however, stuck—and will stick—by its assertion that none of Moscows exports to its civilian reactor project in the Iranian city of Bushehr may be used for military purposes, a spokesman for the Russian Ministry of Foreign Affairs said this week.

US officials say their suspicions have been stoked by the findings of the IAEA General Director Mohamed ElBaradeis report. The US State Department responded to the developments by calling on the agencys board to formally urge Iran to answer all outstanding questions about that programme and to sign the IAEAs Additional Protocol, which would give UN inspectors the right to short-notice searches of Iranian nuclear facilities, including those that are only suspected of being nuclear installations. The protocol is an addition to the 1968 Nuclear Non-Proliferation Treaty, or NPT.

ElBaradeis Remarks to the IAEA Board of Governors
Speaking Monday at a meeting of the IAEAs 35-member governing board, ElBaradei formally addressed many of the suspicions raised by the leaked report. He called on Iran to permit us to take environmental samples at the Kalaye site—an electric company, alleged recently by Iranian opposition to be a secret uranium enrichment site—and to allow inspectors greater access to provide credible assurances regarding the peaceful nature of Irans nuclear activities.

The agencys report had concluded, in part, that Iran had not met its obligations in terms of the reporting of nuclear material, the subsequent processing and use of that material and the declaration of facilities where the material was stored and processed.

But the report also indicated that the very disclosures of the previously concealed activity and plans might be a sign of an improved and more transparent approach.

The report points out that Iran has failed to report certain nuclear material and activities and that corrective actions are being taken in cooperation with Iranian authorities, ElBaradei said, according to a copy of his speech obtained by Bellona Web. The report also explains that work is still ongoing with regard to the correctness and completeness of Irans declaration to ensure that all nuclear material in Iran has been declared and is under safeguards.

We are continuing our efforts, through technical discussions, inspection and environmental sample analysis, to understand all aspects of Irans nuclear programme, including the research and development work relevant to its uranium conversion and enrichment programme and its programme for the use of heavy water, ElBaradei concluded.

But the report left many questions unanswered, according to a Western diplomat who spoke with Bellona Web on the condition of anonymity. The uranium enrichment plant near the city of Natanz, as well as the construction of a heavy water facility near the city of Arak, were initially revealed to the media by an Iranian opposition movement called the National Council for the Resistance of Iran—an umbrella group for several dissident organizations that includes the Peoples Mujahedin, which is listed as a terrorist group by the United States and the European Union.

Earlier this month the National Council revealed to the media that the Peoples Mujahedin—which had made the initial discoveries about the Natanz site—said they had discovered two more secret uranium enrichment facilities in Iran.

According to the Western diplomat, the IAEA is anxious to investigate these sites, and said a final report on them—and several other items left unaddressed by ElBaradeis speech—will be presented in a September report from the agency. ElBaradei would not comment further on the present or upcoming report when reached by telephone.

The Facts Behind ElBaradeis Statements
According to a diplomat from a nation on the IAEAs governing board, who requested anonymity, ElBaradeis report did not delve into a number of more disturbing questions about Irans nuclear programme.

For instance, since the leak of the IAEA report last week, Iranian officials have turned down the request of inspectors to take environmental samples at the Kalaye Electric Company. Intelligence agencies and exile groups have alleged in interviews with Bellona Web that the plant was used to test Irans centrifuge apparatus—which would constitute a direct violation of the NPT, which Iran signed in 1974.

Additionally, in 1991, Iran imported 1.8 tonnes of natural uranium and failed to report it to the IAEA. Iran said it was not legally required to report it. The IAEA said Iran must declare all such imports as soon as possible. Why this uranium was not reported, said the diplomat, is anyones guess—what if there were more imports that went unreported?

Iran also informed the IAEA in May this year that it intended to build a heavy water research reactor at Arak, although the IAEA had learned about the existence of this site already in December last year from media reports. This plant would yield weapons-grade plutonium.

At Natanz, there is a small pilot uranium-enrichment plant that will have around 5,000 enrichment centrifuges when completed. Iran also has plans to build a large commercial-scale enrichment facility there with more than 50,000 centrifuges—which could produce some 20 nuclear bombs a year. Similar to the case of the Arak project, the IAEA found out about the construction of these facilities, which could produce arms-grade material, from media reports.

These facilities are now out in the open, and that is distressing enough, said the diplomat. But what is more distressing is that the IAEA learned about them by just reading the papers. Iran itself may never have declared them otherwise.

Iran has also admitted—though it did not officially report it at the time—to converting once natural uranium into uranium metal. The Institute for Science and International Security, a security think tank, says uranium metal has few civilian uses but is a key ingredient in nuclear weapons. According to the Reuters news agency, the IAEA says that the role of uranium metal needs to be fully understood, since neither Irans light water reactor under construction in Bushehr, nor its planned heavy water reactors, require uranium metal.

Iran says it has not tested its enrichment centrifuges with nuclear material. The United States and other countries, however, say it would make no sense to build expensive enrichment plants without full testing. Under IAEA provisions, Iran would have to notify the IAEA if it tested centrifuges with nuclear material. The IAEA has a number of questions regarding Irans research and development on centrifuges, ElBaradei said in his report.

According to one of Bellona Webs sources, IAEA inspectors, during their recent visit to Iran, found out at a uranium storage facility that a container of uranium hexafluoride gas—processed uranium used in the enrichment process—was lighter than had been declared by Tehran. Iranian authorities said the uranium was missing due to leaky valves.

Iran Shows Signs of Giving in  on Certain Conditions
On Tuesday, Reuters reported that Irans Atomic Energy Organization had said Tehran might be willing to sign the protocol, but reiterated that it wanted access to Western nuclear technology in return. We have not yet decided about signing the Additional Protocol, but we are studying it with a positive view, Khalil Mousavi, the organizations spokesman, told the news agency. Irans Minister of Foreign Affairs, Hamiz Reza Asefi reiterated this position to Bellona Web that same day.

Both the European Union, Irans main trading partner, and Russia, which has sent over 1000 of its engineers to help Iran build an $800m, 1000-megawatt civilian nuclear reactor at Bushehr, called on Tehran to provide the necessary cooperation. European governments have been more circumspect than Washington in accusing Tehran of conducting a secret nuclear weapons programme, but have expressed concern about the unexplained discrepancies in the reports Iran has submitted to the IAEA. Earlier this week, European Union foreign ministers linked Iranian cooperation on nuclear inspections to progress in implementing a trade and cooperation agreement currently under negotiation between Europe and Iran.

Mixed Messages From Russia
Last month, Russian Minister of Atomic Energy Alexander Rumyantsev said that the Bushehr reactor would become operational in 2005—a clear concession to Western pressure after the previously slated opening date of December this year. Analysts believe that this delay was imposed to allow more time for Iran and the IAEA to continue negotiations over the NPT Additional Protocol.

They also say this will give Tehran more time to sign a long-awaited agreement to return the spent product of the uranium fuel that Russia will be supplying to the Bushehr reactor so that it cannot be separated by Iran for plutonium. The Russian Ministry of Atomic Energy, or Minatom, has since last summer promised it would strike a deal with Iran to return Bushehrs spent fuel, and has several times reported that it had. The latest report indicated that Minatom was ready to go as far as buying the spent fuel back from Iran. In fact, however, no deal to return the spent fuel has yet been concluded.

Russian Minister of Foreign Affairs Igor Ivanov, speaking during a trip to New Delhi, India, expressed the hope that Iran would sign the additional IAEA protocol and agree to more intrusive inspections. Moscows ambassador to the IAEA, Grigory Berdennikov, added that we hope that our point of view is heard in Iran, the Associated Press news agency reported.

This decision by Russia followed a recent BBC broadcastafter the IAEA report on Iran was leaked during the Evian Summit—saying that Putin had told British Prime Minister Tony Blair that all shipments to Bushehr from Russia would be ceased until Tehran signed the Additional Protocol. The BBC broadcast, however, was almost immediately contradicted by Russias foreign ministry, which has led some observers to conclude that the Russian government is no longer running the show at Bushehr.

Who Is in Charge of Bushehr?
Putins pledge to Blair would have been pointless in any case: Viktor Kozlov, the head of the state-run, Minatom connected Atomstroiexport company, which is in charge of the Bushehr reactors construction, said that in April last year, a total of 5,000 metric tons of equipment, including the reactors body, had already been shipped to Iran, according to the Associated Press. Shipments of uranium fuel assemblies began in May this year, according to Minatom.

In his recent commentary, defence analyst and Moscow Times columnist Pavel Felgenhauer wrote that the Bushehr project has fallen out of the hands of the Russian government and into the lap of a handful of Russian oligarchs who dabble in arms trading—though Felgenhauer would not say who they were. He said the US would not stop Iranian-Russian nuclear cooperation by talking to Moscow.