A reliable Iranian opposition group said this week it has evidence that Iran has two previously undisclosed uranium enrichment facilities west of Tehran — information that, if proven, might add credibility to the U.S. administrations assertions that the Islamic Republic is pursuing nuclear weapons and provide a pretext for another U.S.-led war in the region. 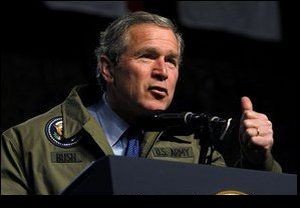 The new nuclear accusations come from a group called the National Council for the Resistance of Iran — an umbrella for Iranian opposition organizations which last December provided commercial satellite photos taken over Iran of two secret nuclear sites: A uranium enrichment plant and a heavy water plant, which would be necessary for making plutonium. The sites were examined in February by the International Atomic Energy Agency, or IAEA, and found — in the words of a senior United Nations official who is familiar with the Iran issue — to be surprising in their sophistication.

This same official said in an interview Tuesday that he was inclined to believe the reports about the two nuclear facilities that were revealed by to the National Council by the People’s Mujahedin. If true, all the four facilities could have shattering ramifications for Irans participation in the 1973 Nuclear Non-Proliferation Treaty, or NPT, of which it is a signatory.

This opposition organization has been extremely on the mark in the past, said the senior UN official. They are a group that seems to be privy to very solid and insider information.

However, the People’s Mujahedin has stirred international controversy and is on the terrorist watch lists of several European Union countries among others. In a gesture toward Iran, the Bush Administration classified the organization as a terrorist group. However, U.S. military officials have also signed a cease-fire with People’s Mujahedin leaders in Iraq.

What the Resistance Group Says it Found
The National Council for the Resistance of Iran said the newly discovered facilities were two small laboratories that operate as satellite plants to a larger nuclear facility in Natanz, in central Iran. The group said the facilities were discovered by the Peoples Mujahedin, a resistance group that brought the Natanz uranium enrichment facility, through the National Council, to the attention of international weapons inspectors in December by supplying a number of satellite photos of the sites.

Iran has insisted that its intention for the sites — a hexafluoride gas uranium enrichment centrifuge facility at Natanz and a heavy water facility near Arak — is to make fuel for a civilian nuclear power program. But U.S. officials and independent analysts say Irans atomic program could allow it to break out of the 1973 Nuclear Non-Proliferation Treaty, or NPT, when it is ready to build nuclear weapons, much as North Korea did when it started reprocessing its spent nuclear fuel for plutonium.

Iran is sending the signal that it is close to being able to make nuclear weapons while denying it has any such intention, David Albright, head of the Institute for Science and International Security, wrote in a recent research article.

Indeed, Iranian President Mohammad Khatami recently announced that Iran is mining its own uranium. The Natanz uranium enrichment facility has, according to IAEA chief Mohamed ElBaradei, about 100 completed centrifuges, and the equipment to build at least 5000 more. When this plan is realized, Iran will have the capability of making at least two uranium-based bombs per year. Both the uranium mining and the centrifuge capabilities will theoretically give Iran an entirely native ability to produce both nuclear fuel and bombs.

Iran Circumventing International Supervision
According to a diplomat who was present at a closed-door address last week to the IAEA by Irans Nuclear Minister Gholam Reza Agazadeh, the minister reportedly said that Iran was not willing to submit to the tougher inspection measures being urged on it by the IAEA.

Ali Savafi, an official with the National Council for the Resistance of Iran, said that the Iranian regime is working on other outlets to circumvent international supervision and international monitoring. Asked about the two newly revealed sites, he told Bellona Web that one of them had already had several centrifuges for processing uranium installed. He would not be more specific about what the sites hold.

It has been suggested by Washington and Savafis group that Iran has already tested a secret centrifuge facility — possibly one of the two currently in question — to enrich small quantities of uranium. If that were true, it would be a direct violation of the NPT, say international weapons inspectors.

Savafi said his organization, which had already provided the details of the alleged new sites to the IAEA, plans to make its findings public within days. The IAEA is holding a June board meeting at its headquarters in Vienna to review Irans compliance with the NPT.

A spokeswoman for the IAEA, Melissa Fleming, declined to comment on the new information. We are not commenting at all on the situation in Iran because we are in the midst of a very sensitive inspection, she told The New York Times. We are going there. We are taking samples and we are doing analysis.

Tensions Mounting Between Tehran and Washington
The accusation about the new nuclear sites comes at a time of mounting tensions between the two countries that some international officials fear could lead to a jingoistic U.S.-led war — with the American troops still conveniently stationed in Irans defeated neighbor, Iraq.

Over the weekend, a bipartisan group of U.S. lawmakers called for an Iranian regime change — a politically charged phrase that was used repeatedly in Washington circles to describe the U.S. invasion of Iraq. Similarly, the U.S. also vindicated its intervention in Iraq on the basis that Baghdad was giving refuge to al-Qaeda operatives, and that it has nuclear weapons.

President George Bushs Administrations rhetoric on Iran — its insistence that it holds weapons of mass destruction, the al-Qaeda connection and the regime change policy — has led many to a sense of déjà vu because of this blunt repetition of key phrases the president used to mobilize the American public behind the operation dubbed Iraqi Freedom.

Though there is virtually airtight information that Iran could develop nuclear weapons capabilities, it nonetheless denies the charges that its facilities are meant for anything but peaceful purposes.

We hope that wisdom and logic dominates the Americans debates and they refrain from carrying out any interference in our affairs, said Irans Foreign Ministry spokesman Hamid Reza Asefi.
Iran has always defended its interests with full power and will continue to do so. It wont hesitate even for a fraction of a moment to defend itself, he told Reuters without elaborating on what that defense would be.

Moscow Undeterred in its Iranian Nuclear Pursuit, But is Wary
Despite growing fears and escalating hostility in Washington, Russias Ministry of Atomic Energy, or Minatom, has again announced that it will not drop plans to complete the construction of the $800m, 1000-megawatt reactor it is building for Iran in the port town of Bushehr.

Russia does not see any reason now to review its stance and its role regarding the construction of Irans first nuclear reactor, PRIME-TASS news agency quoted Russias Atomic Energy Minister, Alexander Rumyantsev, as saying after talks with Iranian nuclear officials visiting Moscow on Monday.

Russia says it is providing Iran only with civilian nuclear equipment, adding that the spent nuclear fuel, or SNF, from the Bushehr plant will, in a highly irregular deal, be purchased back from Tehran by Moscow so that this SNF cannot be reprocessed for plutonium in Iran and give it additional material for potential weapons production.

We will continue to fulfill our duties despite the fact that our position on this question is different to Washingtons official view, Rumyantsev was quoted as saying.

During talks with the Iranians at Russias Ministry of Foreign Affairs, however, Deputy Foreign Minister Georgy Mamedov called on Iran to provide guarantees that it is not using its atomic energy program as a cover to develop nuclear weapons, the Associated Press reported.

Mamedov expressed anxiety about the existence of serious, unresolved questions in connection with Irans nuclear research during a meeting Tuesday with Iranian Ambassador to Russia Gholam Reza Shafei, the Russian Ministry of Foreign Affairs said.

Judging by these statements, the Natanz and Arak sites have given Russia pause in recent weeks, and in a sign that Moscow may have started to heed Washingtons concerns, Russian officials have urged more nuclear transparency from Iran. Russia has also completely retracted its former repeated statements that Iran will not have any nuclear weapons capability in the near future.

Bush Administration officials meanwhile say they are now trying to build international support for an official finding from the IAEA on whether or not Iran has a weapons nuclear program ready.

On Sunday, The Washington Post reported that the administration has cut off diplomatic contacts with Iran and appears ready to embrace an aggressive policy of trying to destabilize the Iranian government.

According to the Post, the White House is due to consider next Tuesday a Pentagon-backed proposal to undermine Irans clerical rule through a series of orchestrated popular uprisings. It was not known what actions the Pentagon was proposing, although one U.S. official have suggested Washington could provide backing for exiled opposition groups and dissidents such as the Peoples Mujahedin and Reza Pahlavi, eldest son of Irans late shah who was overthrown in the 1979 Islamic Revolution. The White House offered no comment when contacted by Bellona Web on Tuesday.

The message Iran is hearing from Washington is: Were out to get you, said an Iranian observer who declined to be named, in an interview with Bellona Web.