Of all the middle-eastern thorns currently vexing the side of the US administration, one, in theory, would seem easy to eradicate, especially under cover of the more intense than expected US-led war to bring down Saddam Hussein. That thorn is the Russian-built, $800m light water reactor in the Iranian port town of Bushehr, located just 300 kilometres across the Persian Gulf from the battlefields in southern Iraq.

Published on April 3, 2003 by Charles Digges 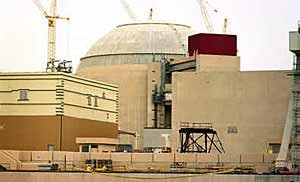 For the past several years, this reactor has been the lightning rod for US criticisms of Russia’s nuclear technology investments in Iran — one of the three states, along with Iraq and North Korea that President George Bush has labelled the "axis of evil." Now, according to some Russian and Israeli officials, it could be an unofficial target that could easily be hit in under fog of the escalating Iraqi conflict.

The United States and Israel have long suggested that the reactor, which is being built by Russia, is a smokescreen behind which Iran is acquiring more sensitive nuclear technologies. For its part, Russia had until recently denied that Iran had the capability to manufacture nuclear weapons.

But a recent visit to Iran by inspectors from the International Atomic Energy Agency, or IAEA, revealed a giant uranium enrichment facility near the city of Natanz that, when completed, will operate some 5000 hexafluoride gas enrichment centrifuges. The site was built partially underground and is encased in cement walls that are a meter thick — an apparent fortification against a potential military strike. The Iranians also recently revealed that they are mining their own uranium ore, which in theory gives the Islamic Republic an entirely indigenous capability to produce its own nuclear fuel and weapons.

These developments have caused Alexander Rumyantsev, the Russian atomic energy minister, to back-track on his staunch assertions that Iran has no nuclear weapons capability, and two weeks ago he admitted that Moscow really doesn’t know what the future of Tehran’s nuclear programme holds. This ambiguity, however, has not deterred Russia from seeking other nuclear technology deals in Iran, which will likely include the construction of a second reactor at Bushehr.

Tehran has meanwhile said it will refuse future visits from the IAEA unless trade sanctions recently levied against it by the Bush Administration are repealed, raising fears that Iran eventually will follow in the foot steps of North Korea and withdraw from the Nuclear Non-proliferation Treaty, of which it is a signatory.

Israel may exercise "Osirak option"
"It has long been clear to us that Iran is taking its nuclear programme in a hostile direction," said an Israeli official who declined to be further identified. "With the current build-up of US forces in the region, now, theoretically, would be a golden opportunity to get rid of the problem conclusively."

Israel has taken military action against nuclear installations in the countries of its Arab neighbours before: In 1981, Israeli fighter jets bombed and destroyed a nuclear power plant that was being built in the Iraqi town of Osirak. While noting that he hoped the issue could be solved by other means, the Israeli official said that "the ‘Osirak option’ is still on the table — and not just for Bushehr, but for Natanz and the other sites as well."

Among these other sites is a uranium enrichment facility that Tehran has said is a watch factory. According to some in the US intelligence community, Iran may already be enriching uranium at that site, which would be a breach of Tehran’s obligations under the Nuclear Non-proliferation Treaty.

The Israeli official would not say whether the Osirak option is being discussed in terms of a direct bomb raid on Bushehr and Natanz, or whether an attack would be disguised to look like collateral damage from an errant US missile or some other military accident.

Indeed, many of the missiles deployed with US troop in Iraq have the necessary flight range to hit Bushehr from bases in southern Iraq or Kuwait. In the past two weeks of fighting, a handful of these missiles have flown off course, with two landing in Jordan, and another two accidentally firing back in the direction of Kuwait during the opening days of the war.

"Obviously, the notion that Bushehr could be hit supposedly ‘accidentally’ is something we have considered," said an official with Russia’s Foreign Ministry, who declined to be further identified. "But if that happened, the United States would have not just Tehran to answer to, but Moscow as well."

The Russian Foreign Ministry has been instrumental in laying the legal foundations for Russia’s nuclear cooperation with Iran.

According the foreign ministry official, as well as figures provided by Atomic Minister Rumyantsev, there are some 2000 Russian technician working onsite in Bushehr, and an equivalent number of Iranians.

US testing Iranian neutrality
Some analysts in Washington and Russia have suggested such an attack would be unwise, and would irrevocably damage Iran’s stated neutrality toward the US-Iraq war. But the Russian Foreign Ministry official said that the Pentagon — particularly US Defence Secretary Donald Rumsfeld — is already doing much to erode that neutrality.

At the beginning of the week, Rumsfeld lashed out against Syria and Iran, accusing them of supplying Iraqi troops with night vision goggles and other advanced military technologies that are forbidden to Baghdad under UN sanctions imposed after the first Gulf war in 1991. Press reports have also indicated that thousands in Iran and Syria stand ready to join Iraqi forces. In his remarks, Rumsfeld said that supplying Iraq with military aid will be viewed by the United States as "a hostile act" and that Iran and Syria "will be held accountable for their actions."

"Apparently, Rumsfeld is not ruling out plans for a wider conflict in the region that could include Syria and Iran," the Russian foreign ministry source said. "In this context, an eventual attack on Iran’s nuclear infrastructure seems more likely."

He added that "the arrogance of the Bush Administration in its dealings with Russia and the world at the moment would protect their consciences after they killed thousands of innocent Russian specialists working at Bushehr."

A spokesman with the US State Department would not comment on whether Iran’s nuclear infrastructure would come under attack during any potentially expanded conflict that would draw in Iran, and added that the "precise and surgical nature" of American air strikes ensured the controversial facility at Bushehr would not be stuck by accident. He denied that there were any current plans for a military assault on the reactor.

Officials with the Iranian foreign ministry and its Washington, DC embassy would only comment to assert that Tehran’s nuclear ambitions lie only in the energy-producing sector and its programme is designed to supply back up power for a growing population. This assertion, however, has been widely ridiculed by the Washington establishment, which asserts that Iran has more than enough natural gas reserves to fulfil its energy needs.

Analysts: Accident unlikely but attack may be imminent
Analysts agreed that a potential "accident" at Bushehr was unlikely, and would in any case be construed as an attack.

"If the United States were interested in causing some kind of accident it would have to be un-attributable," said Jon Wolfsthal of the Washington based Carnegie Endowment for International Peace. "Something like a fire at the site, but not a US missile supposedly headed for Baghdad ending up in Bushehr."

Wolfsthal added that it was probable that US officials were thinking about ways to destroy Bushehr, but said that they could chose to do that at any time. "They have to consider whether they want to do this in the context of war."

Another question, Wolfsthal said, is what destroying Bushehr would solve in the long run, as any prospective reprocessing of spent nuclear fuel for weapons grade plutonium will not be done there, but at other sites that are out of range of the missiles deployed with US troops in Iraq.

Another US nuclear analyst, who requested anonymity, said any attack on Bushehr would be "an outright provocation — regardless of whether is posed as an accident. No one would believe that it was just a mistake."

Pavel Felgenhauer, an independent Moscow-based military analyst and columnist for English-language daily, The Moscow Times, speculated that any attack on Bushehr would not be a lightly disguised accident, but rather an open assault. In Felgenhauer’s analysis, the United States, with its troops still entrenched in the region, will deliver an ultimatum to Iran to halt construction on the reactor this fall, just prior to when the reactor is scheduled to come on line.

"The timetable in the fall is important, because they have to blast the reactor before it goes on line" loaded with nuclear fuel, he said.

A spokesman for an Iranian government opposition group called the Democratic Nation of Iran, which has dissident membership both in Washington and Iran, hoped the US military establishment would not attack Bushehr because it would destroy the last tatters of civil ties between the two nations.

"It would be a very big mistake to attack Iran in this way — we need US help and in setting up democracy," said the spokesman named Hamid, who declined to give his last name.