US State Department officials this week heated up their allegation that Iran’s newly-revealed uranium mines are proof positive that Tehran is developing a nuclear weapons programme, with Russia’s technological and material complicity, and US officials say the Muslim state’s pursuit of a closed nuclear fuel cycle — which relies on reprocessing to harvest weapons-usable plutonium from spent nuclear fuel — is a clear indication that Iran wants the bomb.

Published on February 13, 2003 by Charles Digges 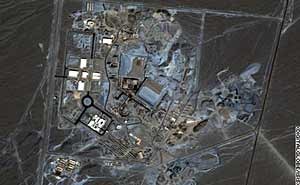 "Iran’s admission that it’s been mining uranium, when Russia has agreed to provide all the uranium fuel for lifetime of the Bushehr reactor, raises serious questions about Iran’s supposedly peaceful nuclear program, US State Department Spokesman Richard Boucher said.

"Iran’s ambitious and costly pursuit of a complete closed nuclear fuel cycle only makes sense if it’s in support of a nuclear weapons programme," Boucher said. "We continue to have very grave concerns that Iran is using its supposedly peaceful nuclear programme as a pretext for advancing a nuclear-weapons programme," he said.

Boucher added that if reports suggesting that Iran will reprocess spent fuel were accurate, this would "directly contradict" Iran’s agreement with Russia to return all of the spent fuel to Russia.

"That would cause us further concern, as it would lay bare Iran’s ambitious desire to develop the capability to produce weapons-usable fissile material under its own control," Boucher said.

The surprise announcement on Monday by Iranian President Mohammad Khatami said that Iran had begun mining uranium deposits near the city of Yazd. Other mines near Ardakan, in central Iran, have begun extracting uranium from underground reserves, said Gholamreza Aghazadeh, the head of Iran’s Atomic Energy Organization, according to the official Islamic Republic News Agency. Aghazadeh also announced that uranium processing was about to start.

"This comes as no surprise to us, as we have been aware of this uranium exploration project for several years now," said Melissa Fleming, a spokeswoman for the Vienna, Austria-based International Atomic Energy Agency, or IAEA.

"In fact, a senior IAEA official visited this mine in 1992, and the Iranians announced to us officially in September their plans to develop an ambitious nuclear-power program that would include the entire nuclear fuel cycle," added Fleming.

As a signatory to the nuclear Non-Proliferation Treaty, Iran says it will provide access to its facilities and uranium deposits to the IAEA delegation — led by IAEA General Director Mohamed ElBaradei — scheduled to be in Tehran February 22-24. During this visit, IAEA officials will also inspect two facilities — one a heavy water plant and the other a uranium enrichment plant, which are, respectively, capable of producing weapons-grade plutonium and weapons-grade High Enriched Uranium. Boucher urged the Iranians to cooperate with ElBaradei and his team during their visit.

US Department of Defence officials, speaking anonymously, said these sites, which were picked up by satellite cameras in late December, were constructed in Iran with Russian help. Moscow has denied it assisted with the sites and Iran denies they are for weapons purposes.

The uranium mining project would theoretically give Iran — which Washington accuses of seeking to develop nuclear weapons, and also of being one of the three members of the "axis of evil" — independent access to fissile material, a scenario that gives Washington cold sweats.

In January, Moscow and Tehran signed document assuring the return of spent fuel from fuel that Russia will supply the Bushehr reactor. This protracted spent nuclear fuel (SNF) deal was closely watched by non-proliferation experts who said Iran might have an interest in reprocessing the fuel for weapons uses. The clinching of the SNF return deal to Russia last month appeared to settle at least some of the pressing nuclear proliferation risks in Iran. If Iran could not reprocess its fuel, it could not make weapons.

But Iran’s newly revitalized uranium deposits — which have been known to the International Atomic Energy Agency since 1992 — theoretically make agreements to export Russian-controlled SNF to Russia moot. It also throws into question Russian assurances that the Iranian programme is peaceful — assurances that were based, in part, on Moscow’s dogged pursuit of agreements with Iran stipulating the return of Russian SNF to Russia.

Russian and Iranian experts agreed that the fuel for the first Russian-constructed reactor at the port of Bushehr will run on Russian fuel, much of which has already been shipped into the country.