After receiving the most pointed lambasting from US officials yet for cooperation with Iran, Russia’s Nuclear Ministry, or Minatom, appears to have taken half a step backward from its plans to expand nuclear activities with the Middle Eastern country.

Published on August 5, 2002 by Charles Digges 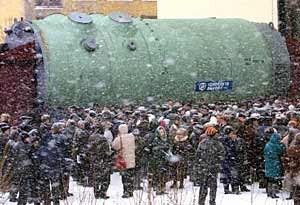 On Friday, Nuclear Minister Alexander Rumyantsev was to hold a joint press conference with US Energy Secretary Spencer Abraham, who on Thursday had publicly dressed down Russia’s newly announced plans to build five more nuclear reactors in Iran. The press conference was abruptly cancelled.

Abraham was in Moscow with US Undersecretary of State John Bolton until Sunday on a working visit.

Speaking Thursday, Abraham became the highest ranking US official to publicly tie Russia’s assistance in building a nuclear power plant in the Persian Gulf city of Bushehr to a veiled nuclear weapons programme, and implied that Russia’s expanded plans were an extension of that programme.

"Iran is aggressively pursuing nuclear weapons as well as weapons of mass destruction," said Abraham in his Thursday public comments. "We consistently urge Russia to cease all nuclear cooperation with Iran, including its assistance to the reactor in Bushehr," he said.

In lieu of the cancelled Rumyantsev-Abraham press conference, the Minatom press office released later in the day a terse statement saying Russia’s programme of cooperation with Iran was not engraved in stone.

The statement said that the 10-year, $10-billion plan on expanded nuclear and economic cooperation in Iran — which was approved by Prime Minister Mikhail Kasyanov on June 24 and released two days later, literally hours before Abraham’s arrival in Moscow — is "merely a list of existing technical possibilities."

"Their implementation will depend on many factors, including political factors," the statement continued.

In response to the US accusations that Russia’s ties with Iran were helping advance its nuclear weapons programme, the ministry reaffirmed that the nuclear cooperation with Iran was limited to building the reactor in Bushehr.

One US official familiar with the talks described the new Russian statement as "big progress."

"We’re very pleased," the official said. "That’s a change from what they were saying early in the week," after the plan to build five more reactors in Iran was announced.

Russian officials insist that the Bushehr reactors are for civilian energy use only and will not be used to develop fuel for nuclear weapons. They point out that they will be light-water reactors, with the same technology the United States is using in North Korea in an effort to rein in that country’s nuclear programme.

But the United States believes that Iran’s purpose in acquiring the reactors isn’t energy but the expertise and equipment it would gain along the way. As Abraham pointed out in his Thursday remarks, "[the United States has] long been concerned that Iran’s only interest in nuclear civil power, given its vast domestic energy resources, is to support its nuclear weapons programme."

There are also unresolved issues of what will happen to the spent nuclear fuel produced at the Bushehr reactor — which, if reprocessed, would yield plutonium. Despite Minister Rumyantsev’s repeated assurances that the fuel would be repatriated to Russia, Minatom insiders have said that progress to forge that agreement with Iran has been slow.

Russian nuclear experts suggested that the release of the new plan last week was a negotiating tactic.

"There is a strong impression that is shared by many Russian experts that the United States and Russia have already reached a mutually acceptable agreement on Iran — everything is in the bag already," Anton Khlopkov, a nuclear expert with the PIR Centre, a Moscow think tank, told Bellona Web Friday. "Both sides seem to have an understanding that Russia will supply light-water reactors to Iran, but nothing besides such reactors."

But Radzhab Safarov, director of Russia’s Iranian Studies Centre, said that to convince Moscow to drop its programmes in Iran, the United States will have to put its money where its mouth is.

"Iran is a solvent country that is quite capable of paying," Safarov told Bellona Web. "The West, however, confines its efforts to words alone: Do not do any business with Iran because it will affect global security. These are good words, but they are just words, nothing else. It is very unlikely that Russia will be convinced to change its priorities only with the help of words."

For Russia, more hangs in the balance, namely the $20 billion in foreign aid that G8 nations have pledged to give Russia to bolster the security of its dilapidated nuclear infrastructure. As one US official, speaking with Bellona Web on the condition of anonymity, put it: "It would be a shame if the funding dried up over this Iran problem."