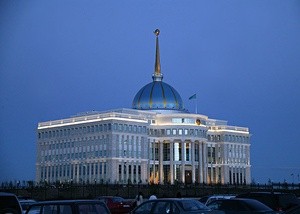 Kazakhstan has, meanwhile, confirmed its interest in hosting the fuel bank, President Nursultan Nazarbayev said, according to RIA Novosti.

"If a nuclear fuel bank for nuclear energy was created, then Kazakhstan would consider hosting it," Nazarbayev said.

The Kazakh government has extended an invitation to Obama via Kazakh Senate Speaker Kasym-Zhomart Tokayev for discussions of the project, Agency France Presse reported.

US Senator Richard Lugar, one of the authors of the 1992 Cooperative Threat Reduction legislation that has helped Russia decommission hundreds of warheads, ballistic missile submarines and mobile missile launchers, has endorsed a fuel bank plan.

Some EU diplomats have said a Kazakhstan-based fuel bank would be a workable solution for curtailing the proliferation of nuclear weapons by centering uranium enrichment in one place.

Others, however, have said that Nazarbayev’s totalitarian regime may put a damper on the kind of transparency such an international facility would require.

Russia has meanwhile aggressively forwarded itself as a contender for an international fuel bank. Officials with the Obama administration have not ruled out the possibility of including the Angarsk Electrolysis and Chemical Combine in Siberia for such purposes as well.

“The idea of a fuel bank does not mean there has to be just one,” the White House official told Bellona Web. “Russia has put effort behind its proposal, but we are focusing on Kazakhstan at the moment as the host.”

Fuel bank’s purpose already redundant
A Bellona expert, however, has questioned the wisdom of a fuel bank, pointing out that its primary function – to deter potential rogue nations from pursuing uranium enrichment on their own – has already been subverted by Iran.

Bellona further questions the environmental soundness of fuel bank projects being considered by the International Atomic Energy Agency. In the model of the bank envisioned  by Russia and endorsed by the IAEA, the bank would not only provide fuel, but environmentally disastrous spent nuclear fuel storage and reprocessing facilities.

Politics and practicality
The revelations that the White House spotlight is on Kazakhstan put weight behind Obama’s embrace in his speech in Prague on April 6th of the nuclear fuel bank idea.

Obama would like to establish a repository for nuclear fuel, much of it from retired nuclear warheads, other administration officials said following the Prague appearance.

As such, nations seeking nuclear power could access fissile material without developing nuclear enrichment capacities on their own or creating a market for such materials. The Bush administration had also entertained the idea but had opposed creating the bank in a neutral country under the supervision of the International Atomic Energy Agency.

Kazakhstan, where the Soviet Union tested its nuclear weapons and where Russia still launches its satellites, would represent the clearest sign yet that the Obama administration is ready to bend Moscow’s way to win a partner in Obama’s arms control agenda, which includes deep slashed in Russian and American arsenals with the ultimate goal of a nuclear weapons-free world.

After the Soviet Union broke up, Kazakhstan was left with a nuclear arsenal of its own, which it voluntarily gave up.

Bellona endorsed end to nukes, but what of environmental costs?
Bellona’s Igor Kudrik said the primary intention of a fuel bank, which is to prevent so-called rogue nations, primarily Iran, from acquiring access to reprocessing technologies. This notion has already been undermined because “Iran has already said it wants to develop a full fuel cycle of its own,” said Kudrik.

Meanwhile, said Kudrik, countries that do not already have nuclear power plants would purchase fuel for the reactors that they build directly from a fuel producer rather than a fuel bank.

Furthermore, countries that do not have their own reprocessing technology do have access to the fuel market , and contracts for fuel usually stipulate that spent fuel be returned to the producer, said Kudrik.

The consequence of such a plan is that whatever country hosts the bank will also hold the world’s spent nuclear fuel.

Kazakhstan: heroic volunteer or long-standing waste dump?
An EU diplomat familiar with the nuclear security issues said Kazakhstan made sense as a potential site for a nuclear fuel bank.

"This is one of the very few countries that had nuclear weapons and destroyed them. So Kazakhstan is a very interesting offer," the diplomat said, noting that the EU has given the IAEA in Vienna €25 million ($34 million) to figure out how to structure such a fuel bank.

The IAEA last month reached its funding target to move forward with the notion of citing and building a nuclear fuel bank after Kuwait pledged $10 million toward the effort. The United States Congress also put up $50 million toward the project as a matching grant provided by the Nuclear Threat Initiative, a powerhouse Washington-based anti-proliferation non-profit.

The IAEA plans to develop a bank blueprint for its 35-nation governing board to review at its June session, IAEA chief Mohamed ElBaradei said. Elbaradei’s terms as IAEA director expired in November, and diplomats say that Elbaradei intends to make the establishment of such a bank a hallmark of his tenure.