A fund managed by the European Bank for Reconstruction & Development (EBRD) has agreed to grant aid in the amount of €70 million to four projects cleaning up nuclear contamination in Northwest Russia. 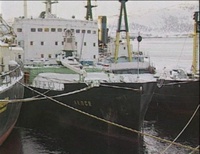 There, 22,000 spent nuclear fuel assemblies from nuclear-powered submarines and icebreakers “are kept in unsafe condition,” according to the EBRD. The project aims to create safe buffer storage, while a long-term “overall remediation plan to retrieve and ship the fuel for treatment or long-term storage” is developed, said a bank memorandum.

A third project, of €5.6 million, involves the defuelling by Rosatom of 1960s-built Papa class nuclear submarines over two-and-a-half-years, with spent fuel being unloaded and stored safely. This will “improve the environmental situation and reduce risks of nuclear and radiological accidents,” said the EBRD.

And a fourth €5.1 million grant will help improve radiation monitoring and emergency response systems in the Arctic Arkhangelsk Region, which also has sites of substantial nuclear materials and devices. The money will over two-and-a-half years go toward installing modern monitoring and communications systems and develop emergency plans covering all nuclear hazards in the region.

The Administration of the Arkhangelsk Region and the Nuclear Safety Institute of the Russian Academy of Sciences will manage this project.