NEW YORK – Senator Richard Lugar, Republican from Indiana, and the former Democratic senator from Georgia, Sam Nunn traveled to Moscow to launch a new effort this week to expand the reach and strength of their programme to secure nuclear, chemical and biological weapons at a time of deepening tensions between the United States and Russia. 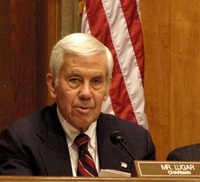 Lugar and Nunn, the architects of legislation approved by Congress to destroy weapons as the Soviet Union collapsed – known as the Cooperative Threat Reduction act of 1992 – warned reporters that it would be a mistake to allow recent disagreements with Russia to become a lasting crisis. Lugar, the ranking Republican on the Senate Foreign Relations Committee, cautioned against allowing the relationship to "drift toward conflict."

Nunn, a former chairman of the Senate Armed Services Committee and now co-chairman, with CNN founder Ted Turner, of the nonprofit Nuclear Threat Initiative, expressed concern about the recent dispute over US plans to station a missile defense system in Europe. Russia and the United States need to "pause" and "take a deep breath," Nunn said in Moscow. "We could stumble to the precipice of strategic danger if we and our Russian friends play a foolish zero-sum game with missile defense."

At the outset of the trip this week to examine the past and future of the programme, Lugar and Nunn delivered remarks at a ceremony marking the 200th anniversary of US-Russian relations, held at Spaso House, the residence of the U.S. ambassador in Moscow, diplomats said. Their speeches were notable in urging the audience – which included prominent foreign policy specialists – to think about building partnerships with the United States rather than plunging deeper into rancor.

"In our modern age," Nunn said, "considering the explosion of technology, know-how and terrorism, any plan for global peace and security that does not feature the Russians and Americans working together is not likely to be successful for either of us or the world."

Lugar proposed that Russia and the United States jointly apply Nunn-Lugar methods to the situation in North Korea if agreement is reached on dismantling weapons there. He noted that the legislation has already been used outside the former Soviet Union in the cleanup of 16 tons of chemical weapons discovered in Albania in 2002.

Nunn also called for removing nuclear weapons from hair-trigger alert and deepening cuts in the arsenals. The former senator met Russian President Vladimir Putin in July with a group that included former US secretaries of state Henry Kissinger and George Shultz, among others. The meeting was at Putin’s request.

Nunn said he asked Putin: "Why is it in the interests of the United States for the president of Russia to have only a very few precious minutes to decide whether to launch his missiles, or lose them?" Nunn said a large number of US and Russian weapons could be taken off alert relatively quickly.

Lugar and Nunn expressed concern that the Bush administration might allow a 1991 strategic arms treaty to lapse when it expires in 2009. The treaty in question is the START I treaty, signed in 1991, which limits the number of intercontinental ballistic missiles and bombers that can be deployed by both countries against one another. Russia has called for a new treaty, but the Bush administration has indicated that it does not think one is necessary.

Lugar said he is "inclined to feel we probably do" need to keep the treaty. Nunn said it is "absolutely essential."

Nunn said joint action is needed by both countries to deal with two thorny problems left over from the Cold War: what to do about tactical or short-range nuclear weapons, which have never been covered by any treaty, and the lack of transparency on research into biological weapons.

While in Russia, Nunn and Lugar plan to examine a chemical weapons destruction facility, visit a modern warehouse for storing fissile material and observe a demonstration of rocket fuel destruction, as well as discuss nuclear energy and arms control.