Norway and Russia failed on June 12th to sign a contract on the dismantlement of two Russian non-strategic submarines at an annual meeting on nuclear safety cooperation between the two countries, which took place in a northern Norwegian province of Finnmark, near the Russian border. 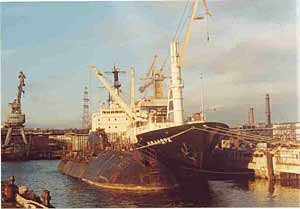 The snag came when the Russian delegation suggested that Norway be financially responsible for the reprocessing of the submarines’ spent nuclear fuel, or SNF—a process that is in violation of the Norwegian Parliament’s policies on foreign nuclear assistance.

The Norwegian Ministry of Foreign Affairs, which runs Norway’s nuclear assistance programmes in Russia, announced earlier this year its intention to fund dismantlement of two non-strategic Victor class nuclear-powered submarines at two shipyards in Northwest Russia. The work is planned to be carried out at Nerpa, located on the Kola Peninsula, and at Zvezdochka, in the Arkhangelsk region’s city of Severodvinsk.

The move was intended to set one of the first concrete examples for implementation of the "Global Partnership against the Spread of Weapons and Materials of Mass Destruction" initiative issued by the world’s Group of Eight, or G-8, leading industrialised nations at its summit in Kananaskis, Canada in June of 2002. This initiative is aimed at keeping track of, securing and cleaning up Russia’s nuclear legacy, and pledges to spend $20 billion in ten years for these purposes. Assistance to Russia in decommissioning of non-strategic submarines was a pledge made by several countries following the summit.

Prior to the meeting in Finnmark, the Norwegian foreign ministry issued a statement announcing the signing of the contract for the two submarines’ dismantlement, but the announcement was premature.

At the very start of the discussions Russian Deputy Minister of Atomic Energy Sergey Antipov, who headed the Russian delegation, brought up the issue of spent nuclear fuel, which will be unloaded from the submarines’ reactors prior to the dismantlement itself. Antipov said Russia wanted Norway to pay for the reprocessing of the spent fuel from the two Victor III class submarines at the Mayak Chemical Combine in the Southern Urals. Kim Traavik, the Norwegian Secretary of State, was not eager to foot this part of the bill.

"This was unexpected and a pity", Traavik said. "It is out of question for the Norwegian side to contribute to the reprocessing of spent nuclear fuel."

Traavik also said that Norway is ready to pay for the defuelling, the dismantlement itself and the shipment of the spent fuel to a storage place, whereas the responsibility for reprocessing that SNF should rest solely on the Russian side.

The negotiations will continue and, according to Traavik, a mutually acceptable solution will be found shortly.

Norwegian Foreign Ministry Forbidden to Support Reprocessing
Norway once did make contributions to reprocessing at Mayak. With a nod from the Norwegian foreign ministry, the so-called Norwegian Plan of Action—a legal framework guiding Norwegian involvement in radiation safety projects in Russia—was developed. Under this plan, Norway paid Russia to build an extra train to carry spent nuclear fuel to Mayak. Russia had previously operated only one train.

But in 2002, the Norwegian Parliament’s Control and Constitutional Committee evaluated the implementation of the Norwegian Plan of Action and made a list of requirements—inspired by Bellona—which, among other things, prohibited the use of Norwegian funds to support the continuation of reprocessing at Mayak.

The Mayak plant—considered to be the most radioactively contaminated place on earth—can theoretically reprocess up to 400 tonnes of SNF a year, but operates at reduced capacity of around 150 tonnes. In December 2002, Russian Nuclear Regulatory agency Gosatomnadzor, or GAN, revoked Mayak’s reprocessing licence because of its continued discharges of radioactive waste generated during reprocessing into adjacent water reservoirs. Each year, regional spring flooding creates the risk that the contaminated water from these reservoirs may penetrate into the open river systems causing an environmental disaster. Nonetheless, Mayak’s reprocessing license was renewed in 2003 on the precondition that the plant develop technologies that would avoid discharging radioactive water into the environment. Mayak, however, has been making those same promises for decades.

More Than 40 Non-Strategic Subs Waiting for Dismantlement
The Soviet Union built around 250 nuclear-powered submarines. Today, only around 50 of them remain in active service in the Northern Fleet in Northwest Russia and in the Pacific Fleet in Russia’s Far East. Around 115 submarines were retired by the Northern Fleet, which only fully dismantled around 40 of them. Approximately 70 submarines, including 45 non-strategic ones, are still laid-up with spent nuclear fuel in their reactors at naval bases and shipyards on the Kola Peninsula.

Since the early 1990s, the United States, through the Cooperative Threat Reduction programme, or CTR, has funded the dismantlement of the Russian strategic submarines, or SSBNs, which posed a threat to US security. The old first- and second-generation non-strategic submarines fell beyond the scope of CTR, as they did not represent any immediate military threat to the Unites States.

They do, however, represent a profound threat to the environment. But the word environment’ remains taboo—thanks largely to the conservative Republican majority in the US Congress—when used in relation to CTR programmes.

After the encouraging G-8 announcement, hoping to ensure politicians’ attention, many in the worldwide environmental lobby have modified their rhetoric, carefully underscoring that nuclear materials—particularly spent nuclear fuel—stored onboard non-strategic submarines also represent a non-proliferation risk as they could be used for making so-called "dirty bombs."

CTR Pays for Spent Fuel Reprocessing
The process of submarine decommissioning involves several stages. First, weapons and other important equipment are removed and the submarine is laid up, with a reduced crew onboard, at a military base. Prior to dismantlement—the literal sawing up of the vessel—spent nuclear fuel is unloaded from the submarine’s reactors. The SNF is then loaded into a special train and shipped to Mayak for reprocessing.

The dismantlement then starts with cutting out the reactor section and scrapping the rest of the submarine. Reactor sections are shipped to designated locations for storage. Sayda Bay, located in the northwestern part of the Kola Peninsula, is the storage place for reactor sections from the Northern Fleet’s decommissioned submarines.

In the early 1990s, CTR started out in Russia by supplying three shipyards—two in Northwest Russia and one in the Russian Far East—with necessary dismantlement equipment. Beginning in 1997, with the goal of speeding SSBN dismantlement rates and improving the process, the CTR programme officials shifted the focus of dismantlement assistance from providing equipment to awarding direct contracts to Russian shipyards.

On Russia’s insistence, CTR also received a waiver from the US Congress to send spent submarine fuel for reprocessing at Mayak—a practice previously strictly prohibited by CTR guidelines and US policy as a whole. The agreement that transpired after the waiver was to reprocess fuel from up to 15 SSBNs eliminated under the CTR programme. As one part of its SNF management scheme, CTR also funded the construction of a fuel unloading point, which included an interim storage pad, and casks for fuel transportation and storage at Zvezdochka shipyard in Severodvinsk and at Zvezda shipyard in the Russian Far East.

A Safe Submarine Fuel Storage is Needed
Coddled by CTR, the Russian Ministry of Atomic Energy, or Minatom, which is now responsible for submarines decommissioning, contrived to sell what could be called a "submarine dismantlement package," which involves funding of both defuelling of a submarine and cutting it apart, and shipment of the submarine’s spent fuel to Mayak for reprocessing.

But Norway declines to support anything that has to do with reprocessing.

Bellona has long advocated for the need to build a proper temporary storage facility at the Kola Peninsula. The reason for that is the necessity to secure the spent fuel that is stored in dilapidated onshore facilities, onboard semi-sinking support vessels and in the reactors of retired submarines. The Russian side, represented by Minatom, remains stubborn in its insistence that all spent submarine fuel be shipped to Mayak.

The reprocessing plant at Mayak cannot, however, reprocess damaged nuclear fuel or some specific types of fuel stored at the Kola Peninsula. Additionally, moving the fuel to Mayak does not solve the problem, but rather simply transfers it from the Kola Peninsula to beyond the Ural Mountains. As was mentioned above, the waste accumulated at Mayak can penetrate, during any spring flood, into the nearby river systems and eventually reach the Arctic Ocean via the Ob and Yenisey rivers.

A couple of days ago, Japan had reportedly signed a contract to dismantle a Victor III class non-strategic submarine at Zvezda shipyard in the Russian Far East. It is as yet unclear whether Japan also intends to pay for the reprocessing of that submarine’s spent fuel.

It is clear, however, that, being an important venture, the dismantlement of non-strategic submarines may face similar roadblocks in the future, if Minatom continues to stick obstinately to its so-called closed fuel cycle policy, which involves reprocessing and which cannot be justified by any economical or environmental considerations.