After nearly eight years of false starts and billions of dollars spent, the Americans — at least — have a plan to dispose of their half of 68 tonnes of surplus weapons-grade plutonium in MOX fuel, as part of a bilateral agreement with Russia, reached between the countries under their previous presidents, Bill Clinton and Boris Yeltsin, sources close to the ongoing negotiations said.

Published on November 1, 2002 by Charles Digges 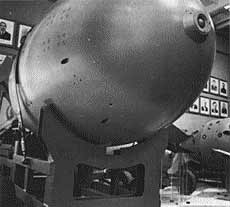 The catch is whether the Russian side will agree to the concept — which was developed by the American nuclear concern Duke, Cogema, Stone&Webster, or DCS. According to spokesmen, officials and former officials close to the talks, the DCS model outlines a procedure for disposing of 34 tonnes of surplus US weapons-grade plutonium at the Savannah River plant in South Carolina.

If the Russians accept the American model, DCS would then build, as nearly as possible, mirror facilities in Russia and America. The Russian programme would be then administered by the Russian Atomic Energy Ministry, or Minatom — and the American programme by the US Energy Department, or DOE.

At a Paris meeting in September, officials from the DOE were promised an answer from Minatom by October 31st on whether Russia would proceed with the MOX programme under the DCS concept, and early this week a high power DOE delegation flew to Moscow in the hopes of getting that answer.

The DOE officials John Baker, James Lacy, Robert Boudreaux and Edward Siskin and the State Department’s Michael Guhin — collectively seen as the American political MOX team — were all in Moscow until Thursday to get the promised response from Minatom about whether the MOX plan would proceed under the DCS model. The answers were not forthcoming.

"[The DOE was] met with more questions. Evidently, those people in Minatom who were supposed to supply the answers did not do so — and this was a political move on Minatom’s side: The answers weren’t there because someone didn’t want them to be," said a source in Russia, who follows nuclear issues closely.

In June, many Russian nuclear officials, former and present, where dismayed that the long-expected decision about the Russian disposition option was dusted under the carpet, as Bellona Web reported in July.

"It was a non decision," said many Russian nuclear officials at the time.

The nuclear industry expert said that another meeting — to follow on this week’s — which would include DOE and DCS technical personnel, is scheduled from November 11th to November 14th, though it was unclear if the meeting would take place in Moscow, officials said, thanks to difficulties a number of DOE and DCS technical staff may have getting their visas under Russia’s new visa regime, which goes into effect on November 1st.

The trip undertaken by the US Government officials was done using a discretionary travel fund controlled by US Energy Secretary Spencer Abraham, as travel restrictions have been placed on defence-related journeys made by government officials because of the ongoing battle in US Congress over the Defence Authorization bill. Indeed, the press office at the US Embassy would not deny or confirm the arrival of the officials.

Nonetheless, members of the DOE-State Department delegation were reached by telephone at their hotels in Moscow, though none would comment on the trip. Siskin, Baker, and Boudreaux referred questions and comments on their visit to DOE’s public affairs office in Washington, D.C. Guhin did not return phone calls, despite several messages left for him. Lacy was likewise unavailable for comments.

Baker also made no contact after Bellona Web faxed and emailed a copy of this article to his hotel, requesting in the message that he confirm or comment on the information on the purpose of the delegation’s trip, or alert Bellona should any inaccuracies be contained in the account.

Joseph Davis, DOE’s deputy director of public affairs in Washington, told Bellona Web in an email interview: "I can’t comment one way or the other on your information."

The MOX debate, which has raged since 1996, is a sensitive disarmament issue between the Kremlin and Capitol Hill. What the process involves is mixing of some 4 percent of weapons-grade plutonium oxide into uranium oxide — hence the term MOX fuel, or mixed oxide fuel, — and the subsequent burning of that fuel mixture in modified conventional reactors. What is produced as waste, therefore, is highly radioactive, but certainly unsuitable for use in conventional nuclear weapons.

But the plan is both financially and philosophically unpopular with the Russians, who — unlike the United States — operate a closed fuel cycle that relies on reprocessing spent fuel produced by burning of uranium rods, largely for the harvesting of reactor grade plutonium. Waste from MOX burning, however, yields plutonium that is extremely difficult to extract for weapons purposes. It is thus an article of faith at TVEL, Russia’s leading nuclear fuel producer — which maintains close ties with Minatom — that a rod of MOX fuel produced is a rod of uranium fuel wasted.

"You therefore have to be some kind of super-patriot, bent on disarmament, to go for MOX," said the industry observer. "Nobody wants MOX, not the Americans, not the Russians — it’s just unprofitable junk."

The disposition of plutonium via MOX also hinders Minatom’s little-publicized plans to eventually convert its nuclear industry to a full closed plutonium fuel cycle with the help of fast neutron, or so called "breeder," reactors, that can both run on plutonium and use the plutonium produced in waste as fuel. So far, Russia has one of these — the BN-600 in operation at the Beloyarsk nuclear power plant. Another fast neutron reactor — the BN-800 — is in the early stages of construction, also at Beloyarsk.

In contrast, in the United States, during the administrations of Jimmy Carter, 1976 to 1980, and Ronald Reagan, 1980 to 1988, breeder research and reprocessing became politically anathema because of the proliferation risks such reactor blocs and their large stores of plutonium could pose. Plutonium was therefore taken out of private hands and relegated to state-owned test reactors and warhead construction — which was already in full swing anyway.

But recently, according to the American press, the idea of re-commercialising plutonium and fast neutron reactors has received a warmer reception from some members of the administration of George Bush and the Bushite DOE. Were this idea to be pursued more vigorously, it would stand the US-Russia MOX agreement to burn the two countries’ surplus plutonium on it head.

For now, however, the MOX negotiation trips will continue as the Americans attempt to seal the deal, and this week’s visit was no exception.

Lyudmila Petrova of the Minatom fuel cycles department confirmed that DOE had dispatched a team to seeking answers about the DCS plan, though she refused to give the names of those who participated.

"Other things were also discussed," she said in a telephone interview with Bellona Web. "But the DCS plan was among those items included in the conversations. We are aware of the DCS plan DOE is putting forward and we have questions about it."

Petrova also confirmed that another meeting was scheduled for November, which she said would be taking place in Moscow, presuming that Russia’s new visa regimen poses no problems for scheduled participants. She emphasized, however, that Minatom and DOE are "constantly" having meetings regarding the MOX programme, and that November’s scheduled visit is "not especially significant."

When GAN was phoned, inquiries about the DOE delegation, and MOX fuel in general, were directed Dr. Andrei Kislov. Kislov, head of the fuel cycle licensing division at Russia’s nuclear regulatory agency, Gosatomnadzor (GAN), also said the DOE delegation was in town for negotiations on the MOX plan. Though Kislov was not present at any of the meetings between DOE and Minatom officials, he said: "I know that Minatom now is carrying out negotiations on this."

Kislov’s agency will ultimately have the responsibility of licensing any MOX production and burning in Russia.

What likely indicates that this most recent visit by DOE is linked to the DCS model for the US, however, is the detail in which a DCS spokesman laid out how the US side of the bilateral MOX plan is to work, should it ever take effect.

DCS spokesman Todd Kaish — though referring inquiries regarding the DOE delegation trip to Moscow back to DOE’s Davis — confirmed the DCS concept for the United States that the well-known consultant said the DOE delegation was working to get Minatom to accept.

According to Kaish, who spoke to Bellona Web by telephone from Charlotte, North Carolina, the DCS, in conjunction with DOE, would virtually destroy 34 tonnes of surplus US plutonium in retrofitted pressurized water reactors, or PWRs, which are similar, but not identical, in their design to Minatom’s VVER-1000s — which are slated to burn MOX in Russia.

Kaish added, though, that he knew of no plans on the DCS drawing board for modifying the VVER-1000s, nor anything about the Russian side of the MOX programme in general. But these are details that would most likely be handled first by Minatom before they were passed to DCS for future execution. Indeed, until this summer, it was forbidden for Russian and American scientists working on the MOX programme to even communicate beyond official visit frameworks, according to the consultant.

It is not expected, even after the scheduled November meeting, that Minatom will embrace the US and DCS concept right away, said the consultant, and a grace period of some weeks would be offered the ministry while it assesses the viability of the plan in Russia.

"But there will be no more of this multi-million-dollar research and development that stretches on for months and years," said the industry observer. "If the Russians turn the DCS plan down, then the MOX programme is finished and something else will have to be done with the 68 surplus tonnes of plutonium."