A-nine-year-old joint US-Russian agreement to dispose of 68 tonnes of weapons-grade plutonium — which insiders say was nearing the scrap heap — was given a jump-start by a recent US Department of Energy (DOE) plan to demonstrate the feasibility of converting warhead plutonium to oxide, allowing it to be burned as fuel. 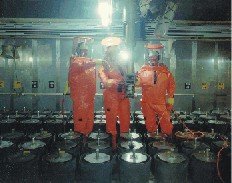 That jump-start came from a pair of contracts forged by the DOE with the Russians, according to which a "conversion demonstration facility" will be built at the Mayak Chemical Combine, near Chelyabinsk, to show the physical and financial possibility of making the fuel, called MOX — a mixture of plutonium and uranium oxides.

The US Los Alamos lab is the other signatory in the $3.6 million contract with Mayak on the demonstration project, and US technicians will be working with their Russian counterparts to develop the highly dangerous fuel that destroys weapons-grade plutonium when burned in a reactor. A prototype should be ready in about three years.

Had these contracts not been signed, said a source close to the Urals regional arm of Gosatomnadzor (GAN), Russia’s nuclear regulatory agency, the DOE plutonium disposition programme may have been scrapped altogether — though current DOE officials would not comment on whether that was the case.

"This particular program has been languishing. First, it was really the obstinacy of some Russian facilities who wanted to get research and development contracts. Second — it was the leadership and direction on the US side. They were just wasting US taxpayer money," said the source who spoke on the condition of anonymity.

"These contracts show that the DOE is willing to not just talk about what they are going to do, but actually do something — so the DOE officials said we’re going to do real work, we’re going to run the numbers, and do the design."

The source close to the GAN Urals branch further said that the DOE plan would add no radioactive waste to local facilities, something previous DOE delegations had not been able to address to the satisfaction of Urals officials and environmentalists in prior negotiations.

"Working with this particular DOE team is the difference between night and day," said the source.

The plutonium disposition programme, however, is not out of the woods yet, he said, but the contracts bought the programme time and credibility pending a major announcement by the DOE on plutonium disposition in mid-July. The source would not specify the nature of the announcement, but referred to it as the "$400 million question," which suggests — though the source would not confirm or deny this — that the decision may mean wide-scale reactor technology upgrades in Russia for the burning of the MOX.

Indeed, with the last week’s pledge by the world’s leading industrial nations to give Russia $20 billion over the next 10 years for non-proliferation efforts — a sort of worldwide Nunn-Lugar Act — experiments in new reactor technologies for MOX disposition may be the next deal on the table between the DOE and the Kremlin.

But not all who heard of the MOX agreement sounded pleased as they cited extreme dangers behind the fabrication of the demonstration fuel — to say nothing of converting vast quantities for reactor use.

"The conversion and fabrication of weapons-grade plutonium into mixed oxide fuel involves ultra-hazardous first-generation technologies with no proven history of success on an industrial scale," said Robert Alvarez, senior policy advisor to the DOE’s Secretary of Energy from 1993 to 1999, in an email interview with Bellona Web.

"There’s a considerable amount of work that needs to be done to convert this stuff, that is not required with fresh plutonium that hasn’t been rendered into a metal for weapons."

MOX vs. immobilization: a brief history
The origins of the agreement to create MOX fuel stem from a 1993 US National Academy of Sciences (NAS) Report requested by the US Senate Congressional Armed Services Committee. The NAS report focused primarily on the weapons materials coming from dismantled warheads. For plutonium, NAS suggested the options of MOX and immobilization methods as a means to achieve non-proliferation objectives.

Presidents Bill Clinton and Boris Yeltsin, enjoying a political upsurge on the international stage, publicly agreed to destroy some 68 tonnes — or 34 tonnes apiece — of excess weapons plutonium that the US and Russia had declared as having at the end of the Cold War.

But immobilization was dealt a major setback in 1998 in the US due to the technological failure to pre-treat military high-level nuclear wastes for vitrification — mixing plutonium with glass for permanent storage — at the Savannah River Site. This process was to provide the primary radiation barrier for the plutonium in the United States.

Ever since then, the creation of MOX fuel — and the eventual building or retrofitting of reactors to burn it in — has been one of the hallmark hopes of the DOE’s Russian non-proliferation programme, though neither side has made any meaningful progress until now. As one former DOE official, who spoke on the condition of anonymity, explained it, an edict to destroy excess weapons plutonium was handed down from the White House — during years when Yeltsin-Clinton back-slapping was at a peak — but then the support evaporated.

"The mandate for the plutonium disposition programme came from Clinton and Yeltsin saying ‘we’re going to declare 68 tonnes of plutonium in excess of weapons needs," said the former DOE official in a recent telephone interview.

"And out of the White House comes the directive — okay, DOE, do something. But what the White House didn’t do was continue to support the mission of plutonium disposition at a really high level, and that’s what it takes."

Adding to this, said the former DOE official, was tension between the DOE and its plutonium labs.

"The policy people and technical people are in different teams and they can often be at odds with each other," the official said.

According to another government official, the DOE was prepared to sign off on a demonstration of MOX conversion as far back as three years ago, but the US State Department, which brokered that deal, never gave the go-ahead to start testing.

Because of such halting progress, the Urals source said, the programme as a whole fell into endless cycles of research and development, wherein — in Russia especially — many of the labs weren’t focused strictly on the science of the project.

Labs at the Russian research and development body Bochvar, for instance, have nixed several MOX proposals over the past years, mainly, according to the Urals source, because the pursuit of MOX is not profitable. Bochvar, he said, makes a royalty on each nuclear fuel rod — with its built-in potential for reprocessing — sold in Russia.

The MOX programme, which is geared toward the ultimate destruction of weapons-grade plutonium, rather than its re-harvesting — threatens to break a lucrative Bochvar rice bowl, the source said. Bochvar officials declined to comment.

Minatom’s cult of plutonium
For decades — and arguably even still — anything having to do with the destruction of weapons plutonium has been a taboo for Russia’s Nuclear Power Ministry, Minatom. Therefore, according to Minatom sources, quiet celebrations at the ministry accompanied the announcement of the Savannah River vitrification failure in 1998.

The Russians, said the Urals source, would only consider MOX for the purpose of putting the excess plutonium to some power producing use — like it is done in France, where reactor-grade MOX fuel has been burned for more than a decade, although not entirely successful.

"Throughout the Clinton Administration, Minatom would not even consider discussion of immobilization, because of the belief that plutonium has great value based on the Soviet rationale of ‘sunk costs,’" Alvarez wrote.

"Minatom’s plutonium policy mirrors that of the US in the 1960’s. Powerful elements of secrecy, isolation and privilege have fostered a rigid theological view by Minatom about the benefits of plutonium."

According to Minatom sources, the MOX option as spelled out in the new agreement is grudgingly acceptable because it allows for the disposition of plutonium in an energy producing way.

"The contract provides for that demonstration of conversion to finally show that disarmament is not just talk, and that we are taking the warheads, turning them into powder, turning that into fuel and giving light and heat to Russian people," said the source close to the Urals GAN.

Reactors
But a plan with that ambition would presumably require that MOX, incorporating weapons-grade plutonium, be fabricated for and burned throughout Russia in already existing civilian reactors. Currently, the only hope of burning weapons MOX on the Russian side is at the Beloyarsk fast neutron reactor, and even that is questionable.

Another option — using Russia’s seven VVER—1000 reactors, which have been considered candidates for upgrades by the DOE and Minatom — could, he said, "lead to second Chernobyl — maybe worse."

He added that any upgrade to a VVER-1000 that would bring it anywhere near a safe range for operation with MOX fuel would require $100 million — a dangerous experiment that would presumably be financed by the DOE.

Storage until destruction
If other reactors are not developed and funded, that leaves, according to Vladimir Slivyak, co-chairman of Moscow-based Ecodefence! environmental group, Beloyarsk’s beleaguered breeder reactor, which, with 34 tonnes of plutonium oxide gathered in one place waiting to be burned, would "create a terrorist’s paradise."

Alexey Yablokov, who was a senior advisor on environmental safety issues to former President Boris Yeltsin in the mid-1990s, agreed with Slivyak.

"The materials that make up the warhead have to be mixed with glass or concrete and stored in a safe facility, or they must be processed in breeder reactors," Yablokov told Bellona Web.

"Unfortunately, Russia does not have the means to do either of these things."

There are 52 military storage depots for the enriched uranium and plutonium from which nuclear warheads are made, but Yablokov and others who have studied security at the sites say security is lax and accounting systems for weapons-grade materials non-existent.

"The basic problem is that the current US-Russian MOX agreement puts the cart before the horse," former DOE senior policy advisor Alvarez said.

According to him, though, weapons-grade plutonium is still more secure than the huge amounts of poorly protected separated plutonium, not used in warheads, that Minatom is storing at its nuclear material and other production sites.

"The a priori assumption behind the MOX agreement is that the safe and secure storage of nuclear materials is of secondary importance. Nothing could be further from the truth, in the US and in Russia," Alvarez said.

"We now need to address these realities. The Nunn-Lugar program served a good purpose during the early years of the post Cold War, particularly for the dismantlement of delivery systems," he added.

"Now it’s time for the US, Russia, and nations formerly part of the Soviet Union, to enter into a nuclear material framework agreement with the goal of achieving the safe and secure storage of excess nuclear materials."