The Norwegian Control and Constitutional Committee in the Parliament has evaluated the Norwegian Plan of Action for nuclear safety projects in Russia and made a list of requirements to be implemented in the future projects supported by Norway. Prior to the evaluation Bellona had submitted a list of changes. All Bellona’s proposals were included into the final document released by the Committee. 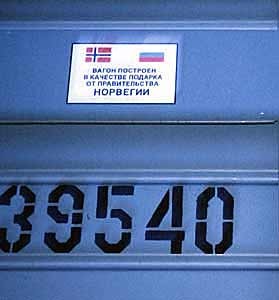 The result of the parliamentary discussion was based on a report from the Norwegian General Accounting Office regarding the Plan of Action for nuclear safety support from Norway to Russia.

Bellona made a list of nine important proposals and suggestions to changes in the Norwegian nuclear safety aid package for projects to come. The parliamentary committee adopted all nine Bellona’s points.

From the early 1990s, Norway has spent some $65m in its program for improving nuclear safety in north-west Russia. For Norway it has been important to go in front internationally to assist Russia in securing its nuclear installations and improve radioactive waste treatment.

The majority in the parliamentary committee underlines the importance of economical and political support to Russia’s nuclear regulatory, Gosatomnadzor (GAN). Improved working conditions for GAN is a key-factor to reach the goal of improved nuclear safety in Russia. So far, many of the Norway supported projects have not been under supervision of GAN. From now on, all Norwegian funded projects must have a written provision, stipulating GANs participation during the planning and implementation stages of each project.

Bellona has called for such evaluations during many years. Those calls concerned specifically the Norwegian support to ship submarine spent nuclear fuel from naval bases to the Mayak reprocessing plant in the southern Ural. The reprocessing in Mayak leads to radioactive contamination of Chelyabinsk area and reprocessed waste is much harder to deal with than with spent fuel in dry-storage.

In autumn 1994, Bellona and Chelyabinsk based NGO Movement for Nuclear Safety arranged a hearing in the Norwegian Parliament, where it was said that the worst way of dealing with spent nuclear fuel from naval reactors was to ship it to the Mayak plant. Despite this, the Norwegian Ministry of Foreign Affairs gave several million US dollars to build a train for such spent fuel transport from Kola to Mayak.

Today, the parliamentary committee agrees with Bellona that the entire spent fuel train project was a failure, since it did not improve nuclear safety, instead it just moved the problems from the Murmansk area to Chelyabinsk region.

The committee also says directly that in the future, Norway shall not be involved in any projects dealing with the Mayak-plant.

The parliamentary committee supported the following nine points from Bellona: