Twenty-six years since Chernobyl: Will the nuclear industry outlive its infamy?

MOSCOW – Today is the 26th anniversary of the worst man-made catastrophe in humankind’s history – the April 26, 1986 disaster at Chernobyl Nuclear Power Plant. The radioactive cloud that shot into the atmosphere with the explosion of Chernobyl’s Reactor No. 4 went far beyond the borders of the former Soviet Union, spreading a deadly mix of strontium and cesium over half of Europe. Twenty-six years on, the Chernobyl accident is not over – certainly not for the world, and not for the nuclear industry, which is facing a crisis it may never recover from.

Published on April 25, 2012 by Vladimir Slivyak, translated by Maria Kaminskaya 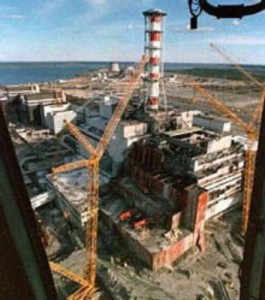 The impact of Chernobyl we see today is not just the exclusion zone around the destroyed reactor, but enormous radioactive contamination still observed in the now independent states of Belarus, Russia, and Ukraine. There are vast territories in Russia’s Bryansk Region where the levels of background radiation are still too high for people to live safely in the area. In Germany, a hunting ban is still in effect in those regions where contamination due to radioactive fallout was recorded in 1986.

Last year, which marked a quarter of a century since the Chernobyl accident, a number of new studies were published revealing what had previously remained unknown about that disaster. Newly discovered data say, for instance, that only 40 percent of the radiation that ended up in the atmosphere following the explosion settled on the territory of the USSR. The rest was dispersed over Europe and even the United States – part of the radioactive fallout had even reached North American shorelines. According to Alexei Yablokov, who is one of Russia’s most prominent ecologists researching the environmental consequences of Chernobyl, the total toll this largest Soviet catastrophe has taken exceeds one million people. The well-renowned Canadian scientist Rosalie Bertell cites an even more staggering figure of two million. The economic losses the catastrophe has inflicted are estimated at between 600 and 800 billion dollars, and several former Soviet states, including Belarus, which took the brunt of the radioactive fallout, still suffer substantial budget outlay to heal the resulting economic and social damage.

Meanwhile, the nuclear industry still insists on victim statistics barely counting a few hundred as it desperately tries to repair its name – as if anyone would believe the “nuclear power is the safest there is” rhetoric. No one would, not after Fukushima.

Just like Fukushima in 2011, Chernobyl triggered a wave of anti-nuclear movements around the world and, as some analysts in the West believe, contributed to the collapse of the Soviet Union. It became that pivotal point that called for a drastic reassessment of the prospects of the peaceful atom. Beyond the USSR, Europe, which sustained the most damage outside the Soviet borders, moved to take its nuclear capacities out of operation only a few years after Chernobyl. In 1988, a peak year for the European nuclear power industry, 177 reactor units were in operation on the territory of the European Union. Today, only 133 remain online, and there is a stable long-term trend toward further decreasing that number. Moreover, Europe is fast approaching the time when nuclear power plants are expected to undergo en masse shutdowns both owing to political decisions to phase out nuclear power and because of the reactors’ soon expiring engineered life spans.

The worldwide post-Chernobyl dynamic has been somewhat different on account of several large developing economies, where nuclear power reached its heyday some decade and a half later, in 2002, but the same downward trend in commercial nuclear capacities has been in evidence since. While in Europe the domino-like nuclear phase-out effect took root and intensified soon after Chernobyl, Fukushima – where the crisis is still far from over – may become that watershed moment for the rest of the world. Contrary to the nuclear industry’s nuclear renaissance hopes, the nuclear decline is bound for a comeback, and on a global scale.

Comparing the world’s two largest nuclear disasters, we see that Chernobyl was still responsible for a much greater amount of long-lived radioactive isotopes that were dispersed into the environment after the explosion. On the other hand, the Fukushima disaster is very likely going to prove the costlier one. The USSR in 1986 had vast armies of essentially free labor at its disposal as it set about the painstaking cleanup efforts at the site, something that is not possible in Japan. Besides, Japan is one of the world’s leading economies and the gigantic losses it has suffered could be of a much more serious extent than those the Soviet economy sustained.

After Chernobyl, the Western nuclear industry took pains to persuade the public and the politicians that the unreliability of Soviet nuclear technologies was the cause of the catastrophe. The Russian nuclear industry now mirrors that response in the massive PR campaign it launched immediately after Fukushima as it tries to persuade the public and the politicians that Russian nuclear technologies are the best and the safest. Neither of the two assertions merit an iota of trust. This is nothing but a survival instinct kicking into high gear. The truth is that there are no safe reactors, and that truth has been proven time and again by nuclear accidents in the USSR, Great Britain, the US, Japan… The industry that has for decades survived on little more than blatant propaganda has painted itself into a corner with assurances that the likelihood of an accident involving a core meltdown is one in a million years. Alas, in just sixty years of the existence of the nuclear power industry, at least six such reactor meltdowns have occurred – Ukraine’s Chernobyl, Great Britain’s Windscale, Three Mile Island in the US, and, now, Fukushima in Japan.

Another indefensible argument the nuclear industry likes to make as a safety claim is to compare the risks of health or life hazard this or that human activity inevitably brings. But nuclear accidents have one major trait which puts them in a category quite unlike any other. Yes, planes crash, trains go off tracks, and pianos fall out of the windows, and more frequently than one would like. But nothing – nothing – other than an accident at a nuclear power plant can simultaneously pour radioactive hail over thousands of miles of land, poisoning it for hundreds of years to come, and inflict direct – including, genetic – harm to the health of yet unborn generations, not to mention billions in economic losses. The devastation such an accident leaves in its wake far outlives its witnesses.

The nuclear crisis at Fukushima is a stark example. Over 100,000 were evacuated from the area around the plant never to return to their homes again. The territory will remain uninhabitable, and the land unsuitable for use for hundreds of years at least. The destroyed reactors will have to be dismantled somehow, and that may lead to new radioactive discharges. An enormous stockpile of spent nuclear fuel still remains to be safeguarded at the site and great concern lingers over the risks it will continue to pose until it is safely isolated. The total amount of radiation concentrated in this waste exceeds by 85 times what was discharged into the atmosphere by the Chernobyl explosion. According to the European Committee for Radiation Risk, the cancer rate among those who lived within a 200-kilometer radius of the plant may reach half a million over the next twenty years. The American Academy of Sciences says the risk of developing cancer due to Fukushima’s effects is greater for women and children, since with equal levels of exposure, cancer incidence rate among women and children is 50 percent higher than among men. We will not know the exact statistics for a number of years yet, but they will unlikely show any abatement.

The Fukushima accident served to spur along yet another trend in the global economy – the development of renewable energy sources. In many countries worldwide, renewable energy is now seen as fully capable of replacing nuclear power. Germany is one of the best-known examples: Wind converters and solar power plants already account for around 20 percent of that country’s energy market, successfully squeezing nuclear power out. Notably, it was Germany – which has already shut down several nuclear power plants and is going for a full nuclear phase-out by 2022 – that lent a hand to the still heavily pro-nuclear France last winter, when an unprecedented cold spell caused an energy shortage and forced France to import power from its neighbor.

China has made fewer headlines with its bold forays into renewable energy following the Fukushima disaster, but its plans are no less impressive: China expects to build 18 gigawatts’ worth of wind power, bringing that country’s total wind capacities to 63 gigawatts. That is commensurate with all of the nuclear capacities of France – Europe’s atomic flagship – taken together.

Ironically, Russia, one of the countries most severely affected by Chernobyl, prefers to ignore the immense renewable energy potential it could avail itself of, still placing its bets on more nuclear power plants. There are many reasons, however, why these bets are not going to pay off. Russia’s new nuclear construction plans are heavily undermined by a shortage of machine-building capacities, the projects’ exorbitant costs, and, no less important, the population’s growing opposition to nuclear power.

A new nuclear power plant project the Russian State Nuclear Corporation Rosatom was ramrodding through in Nizhny Novgorod has recently been announced defunct. The site, where construction should have already started as per the original schedule, is now eyed by Rosatom for a completely new reactor project still in development stages. It is obvious that were it not for the mass-scale public opposition Rosatom faced in the region, the old project would unlikely have been cancelled, not after it had been pushed through all the licensing procedures and had siphoned millions out of state budget. Incidentally, the nuclear industry had envisioned a reactor project in Nizhny Novgorod once before, a few years after Chernobyl – and had cancelled it then, too. This speaks of a stubbornness Russia would be much better served by using to develop its renewable resources.

With capital expenses hovering today around $5,000 per kilowatt of installed capacity, new nuclear power plants lose spectacularly to other energy sources, failing even to reach a level of economic viability. The new stagnation that is already dawning on the nuclear power industry will thus most likely be simply because it is not competitive.

Twenty-six years since the tragic April 26, 1986, we see the nuclear industry sinking once again into a deep demoralizing slump. This time, it is a hole it may never manage to climb out of.

Vladimir Slivyak is co-chairman of Ecodefense! and author of the recently published From Hiroshima to Fukushima, a compelling account of the nuclear industry’s most recent history, combining a detailed chronicle of the 2011 disaster at Fukushima Daiichi Nuclear Power Plant in Japan and an in-depth analysis of the industry’s problems in Russia.