COMMENT: Russia ignoring case for beefing up nuclear disaster preparedness plans – even at risk of losing moscow to a fallout plume in major accident

MOSCOW – All nuclear power plants are dangerous. Each and every one of the world’s reactors in operation is inherently susceptible to an accident – something even the nuclear industry would acknowledge is true. But where countries like Japan strive to learn the tragic lessons of nuclear disasters such as the recent catastrophe at Fukushima Daiichi, Russia, which remains a staunch proponent of nuclear energy, fails to take the potential threat seriously and prepare adequate population protection measures.

Published on January 16, 2012 by Andrey Ozharovsky, translated by Maria Kaminskaya 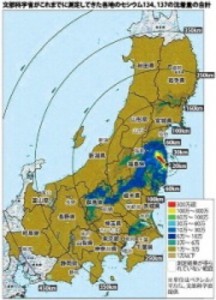 The disaster at Fukushima has served, among other consequences, to reinvigorate the debate about the risks of commercial nuclear energy – a discussion now continued in many countries where practical solutions are being sought to offset or mitigate such risks, ranging from a complete phase-out of nuclear energy to introducing more stringent safety requirements to enhancing disaster preparedness plans.

Russia, alas, is not among these countries – unlike Japan, which last fall initiated a revision of its emergency population protection measures.

The proposal includes an unconditional evacuation provision for the residences nearest to a nuclear power plant in distress; a so-called urgent protective action planning zone for areas within the thirty-kilometer radius of each nuclear power plant (residents within this perimeter would be required to evacuate or stay indoors if radiation levels exceed a predetermined standard); and an expanded fifty-kilometer plume protection planning zone to protect residents within this radius from potential exposure to radioactive fallout.

Notably, Japan has been willing to acknowledge that should an accident happen, the most prudent and efficient course of action to take in order to protect the population would be immediate evacuation of all residents within a five-kilometer radius before establishing all details of the accident.

And it now looks as if Japan would be prepared to go even further than evacuation of closest residencies and distribution of iodine tablets and protective clothing for populations at risk of being affected by radioactive fallout: As a late December story in The Mainichi Daily News reported, Japan was last March considering evacuation from areas hundreds of kilometers away from Fukushima Daiichi, including Japan’s capital city, Tokyo, if the catastrophe at Fukushima had evolved to realize the government’s worst expectations.

Two weeks after the disaster broke out at Fukushima Daiichi, which was hit by the dual force of an earthquake and a tsunami wave – a devastating blow that knocked out the plant’s external power supply, subsequently resulting in the loss of cooling systems, a series of explosions and core meltdowns, and exposure of spent fuel rods in the on-site cooling ponds – the Japanese government’s nuclear energy panel warned that all residents in areas within a 170-kilometer radius of the site might need to be relocated if a worst-case scenario unfolded at the plant, the story by The Mainichi said, citing sources close to the government.

Government estimations that served as basis for the late March warning filled 20-odd pages of a report that Japan Atomic Energy Commission (AEC) Chairman Shunsuke Kondo submitted to then Prime Minister Naoto Kan. The report, cited by The Mainichi, said the worst-case scenario could result in the level of radioactive cesium per square meter of soil in areas within a 170-kilometer radius of the plant surpassing 1.48 million becquerels – or as high as that around Chernobyl shortly after the disaster there struck on April 26, 1986.

Moreover, areas within 250 kilometers from the plant, including Tokyo and Yokohama, were estimated to be potentially contaminated with radioactive substances to a degree that residents would have to be evacuated at least temporarily, The Mainichi continued.

It was apparently with those dire predictions in mind, the paper’s December 24 story said further, that Kan said later in an interview he gave to The Mainichi last September:

“All residents would have to be evacuated in areas 100, 200 or even 300 kilometers from the plant if the leak of radioactive substances can’t be stopped.”

At the time the report was submitted to the prime minister, The Mainichi said, Fukushima Daiichi had “lost its reactor core cooling functions due to the loss of all external power, hydrogen explosions had ripped through the plant’s No. 1, 3, and 4 reactor buildings, and radioactive substances were leaking from the No. 2 reactor due to a meltdown. Workers at the plant had no choice but to manually inject water into the reactors to cool down their cores.” 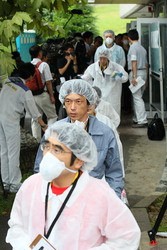 Worst-case assumptions on which Kondo’s report was based held that another hydrogen explosion was possible in the No. 1, 2, or 3 reactor buildings, raising radiation levels, The Mainichi said, adding that “continuing aftershocks [c]ould prevent workers from cooling down the reactors for an extended period and […] all fuel in a pool for spent nuclear fuel in the No. 4 reactor building pool [c]ould melt. At the time, the pool held 1,535 fuel rods that could fill two nuclear reactors.”

The threat of cesium contamination across distances as large as 250 from Fukushima Daiichi could have thus triggered evacuation of Tokyo and Jokohama – cities of over 35 million, or a quarter of all the population of Japan.

These are revelations certainly worthy of serious consideration: Tokyo was preparing to evacuate, at least temporarily, the country’s multi-million capital in case all efforts to bring the disaster at Fukushima Daiichi under control had failed and the worst possible scenario had unfolded. A threat of radioactive fallout of these proportions would be tantamount to one capable of essentially paralyzing a country, and the very warning that came last March that such a drastic – and logistically almost impossible – measure might even be needed would indicate that the consequences of a nuclear disaster could be far worse than humankind has yet seen or has considered preparing for.

And Russia, where many large cities are within a 300-kilometer radius of a nuclear power plant, clearly fails to appreciate such a threat.

For instance, Moscow is just some 200 kilometers away from Kalinin Nuclear Power Plant, in Tver Region. Still, the Russian State Nuclear Corporation Rosatom disregards the risk of any harmful impact an accident there could have on the health of the population in and around the Russian capital. 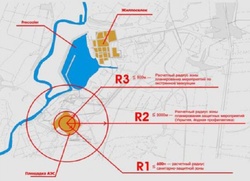 In environmental impact assessment documents for nuclear power plants, Rosatom insists no population protection measures are necessary beyond 3 to 3.5 kilometers off a nuclear power plant and suggests the evacuation perimeter need be no more than 800 meters. Not every authority in Russia agrees that these are the wisest assessments: For instance, the Master Layout Plan of St. Petersburg includes a map of a potential fallout pattern from the nearby Leningrad Nuclear Power Plant, where trails of radioactive contamination show plumes could cover St. Petersburg in the event of a nuclear accident at that plant, just 70 kilometers away.

Indeed, St. Petersburg did once come under exposure to radioactive substances that traveled that seventy-odd-kilometer distance between the city and the nuclear town of Sosnovy Bor following an accident there in 1975.

The threat that hovered over Japan last March and has taken such painstaking efforts to overcome was one of the reasons Japan set a course for a gradual phase-out of nuclear energy as an industry that creates unacceptable risks. Russia, which refuses to even consider the risk of losing its capital city to radioactive contamination should a severe accident happen at nearby Kalinin Nuclear Power Plant, would be well-served to heed the words Japan’s former Prime Minister Kan said in an interview after he retired from his post:

“In the worse-case scenario, 30 million people might have had to be relocated, including residents from the capital area. I thought this could cause Japan to cease to exist as a state.”